SOCOM Wants To Reverse-Engineer Russian-Style Weapons, And Moscow Is Pissed

U.S. special operations forces are looking to manufacture their own own Russian-style firearms domestically — and the Russians have responded... 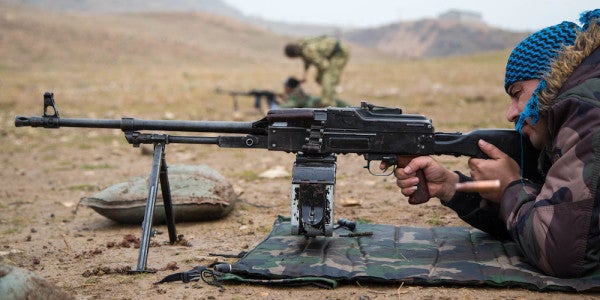 U.S. special operations forces are looking to manufacture their own own Russian-style firearms domestically — and the Russians have responded with an oh hell nyet.

In April 2017, U.S. Special Operations Command dropped a solicitation for a defense contractor with the capability to produce “functioning facsimiles of foreign-made weapons that are equal to or better than what is currently being produced internationally,” according to the solicitation, including a belt-fed PKM-style light machine gun and a 12.7mm heavy machine gun “that resembles a Russian designed NSV.”

The goal of domestic production is simple: cutting unsavory middlemen and shady international arms markets out of the process of snagging foreign hardware to equip allies combatants in countries like Afghanistan, Iraq and Syria.

Unfortunately, the Russians see the solicitation as an invitation to rip off their exceptional military tech.

“Several countries hold licenses for manufacturing Russian machine guns of this model, but the U.S. is not among them,” Russian senator and Committee on Defense and Security chief Viktor Bondarev told state media last week in response to a story in The National Interest on the issue.

“We should prevent any attempts to use Russian weapons developments without our permission. If U.S. intentions evolve into real actions … then we should react decisively and promptly.”

Russia has proven particularly ornery with regards to its coveted military tech in recent months, going so far as to mock China for botching its execution of the J-15 fighter jet that's a cheap copy of Russia's Su-33 carrier jet.

But the warning to the United States is deliciously ironic.

After all, the Russian military has made a habit of pilfering Western military tech through espionage for decades. As recently as February, Russian hackers exploited a vulnerability in U.S. cyber defense and nearly snagged sensitive data on ballistic missiles and advanced drones.

Then again, the Kalashnikov is clearly an exception given the titular AK-47's world-famous flexibility and durability. Indeed, beyond Russian lawmakers, it was Kalashnikov parent company Rostec that expressed the most ire over SOCOM's foreign weapons solicitation.

“If someone wants to carry out this work legally … they should approach Rosoboronexport [Russia’s state arms exporter] and discuss it,” the company said in a statement. “Otherwise, this would amount to the illegal copying of Russian innovations or theft, simply speaking.”