Russia’s Robot Tank Sucks, But Its Military Is Adopting It Anyway

It's official: the Russian military has adopted the Uran-9 unmanned ground vehicle developed by weapons manufacturer Kalashnikov Concern despite a reportedly dismal performance during combat testing in Syria 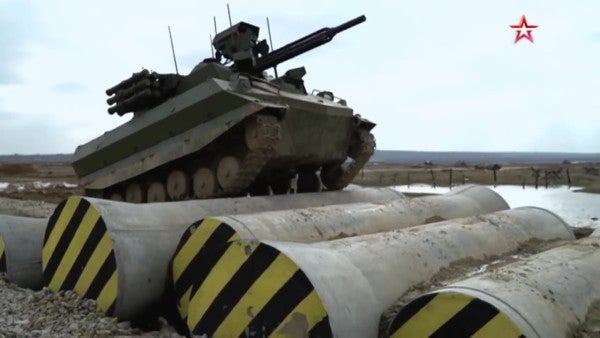 Speaking to state-run news outlets, Kalashnikov general director Vladimir Dmitriev stated that the Russian army had adopted the tank for combat use, with the first production order “suitable for completion,” per Russian newspaper Izvestia.

The Uran-9 is seen as a revolutionary combat asset for the Russian Ministry of Defense, bristling with a 7.62mm machine gun, anti-tank rocket launchers, and 30mm autocannon. But six months ago, the tank was completely unsuitable for combat of any kind.

In a candid admission at a Russian security conference in April 2018, Russian defense researcher Andrei P. Anisimov revealed several critical deficiencies in the Uran-9's combat systems that suggested that the robot tank, as Defence Blog put it at the time, “is not capable of performing the tasks assigned to it.”

Those critical deficiencies include: a limited operational range of just 300-500 meters rather than 1.8 miles; periodic cases of both short-term and long-term loss of control; inconsistencies within the targeting software and hardware; and operational delays ii actually firing the vehicle's intimidating weaponry.

There may be even more deficiencies lying beneath the surface. In May, military researcher Sam Bendett observed for the U.S. Army's Training and Doctrine Command that testing video of the Uran-9 in action indicated that some serious issues likely arose during the downrange tests in Syria given the secrecy surrounding said tests.

“In reality, Uran-9 tests in Syria should have garnered major attention from all major Russian news outlets, given how proud Russian are of their remote-controlled tank,” Bendett told C4ISRNET at the time. “Still, such tests may have taken place in secret.”

There's a chance that these issues have all been resolved: Jane's 360 reported in September 2018 that Kalashnikov was working on expanding the Uran-9's “range, response time, and data bandwidth” while bulking up its armament with an arsenal of Shmel rocket-propelled thermobaric grenades.

At the same time, Jane's source also stated that the Uran-9 would be finished with its operational evaluation and tests by the end of the year while also claiming that vehicle “demonstrated high performance in an operational environment” in Syria, a statement that we know is total b*llshit.

So what happens when U.S. forces run into one of those unmanned Uran-9 vehicles trundling around in Syria in the not-so-distant future? Assuming that those upgrades are just a cover for bad engineering, the answer is simple: Just hit it with a rock or something.

WATCH NEXT: Watch The Uran-9 Robot Tank In Action