Mistakes happen, especially on the Internet, but a recent flub from the office of Florida congressman is especially heinous 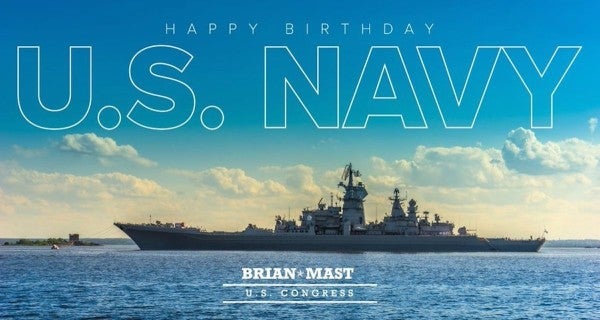 Mistakes happen, especially on the Internet, but a recent flub from the office of Florida congressman is especially heinous.

On Sunday, the official Twitter account of Rep. Brian Mast (R-Fla.), a decorated Army staff sergeant and freshman congressman from Florida's 18th district, posted what was probably intended as a simple birthday message to the U.S. Navy featuring an imposing warship contrasted against a vanilla sky.

Unfortunately, the unlucky staffer who likely produced the image clearly doesn't know their hulls well, because the warship included in the photo
isn't a Navy vessel. No, that's the Russian battlecruiser Pyotr Velikiy, the Kirov-class battlecruiser originally named for Yuri Andropov, the former General Secretary of the Community Party during the late Soviet Union.

It's unclear where the error originated, but it was likely a hasty image choice given the fact that the untitled image of the Pyotr Velikiy
is the first thing that comes up for 'warship' in Shutterstock. And while someone on Mast's staff quickly realized the error and deleted the tweet in question, the image now lives on in social media infamy.

It's worth noting, though, that this isn't the first time that Russian warships have made an appearance during a political tribute to the U.S. Navy.
During the closing days of the 2012 Democratic National Convention, ships from the Russian Federation Navy sailed across a massive screen above former Fleet Forces Command chief Adm. John Nathman (Ret.) during his remarks on U.S. service members and veterans.

While mistakes like the DNC and Mast flubs are usually a function of an untrained eye slapping together some patriotic-looking images without attention to detail, experts believe that Russia's naval modernization efforts might actually give rise to subsequent confusion among photo editors and congressional staffers everywhere.

“Admittedly, since the start of the Russian military modernization some 11 years ago, their technology is looking more modern and Western-looking, especially their naval vessels, ground equipment and even Special Forces uniforms and weapons,” Samuel Bendett, a researcher with the Center for Naval Analyses' International Affairs Group, told Task & Purpose. “So if one is doing a hasty image grab, there is a much higher chance of grabbing a Russian military pic than, say, 6-7 years ago.”

“Just wait until we get to members of Congress tweeting about military robotics,” Bendett added, “Do you know how many cool-looking Russian pics are out there featuring unmanned military systems like robotic tanks?”

In other news, the Army is
reportedly planning on recapitalizing on its watercraft fleet after years of discussions around ditching it entirely. So maybe Mast is just super excited? Either way, his follow-up tweet was much, much better:

Happy birthday to the US Navy! To the men and women who serve to keep our waters safe, we thank you. https://t.co/yYUilgIh7v