To be fair, the ad did not specify which troops should garner Americans' support 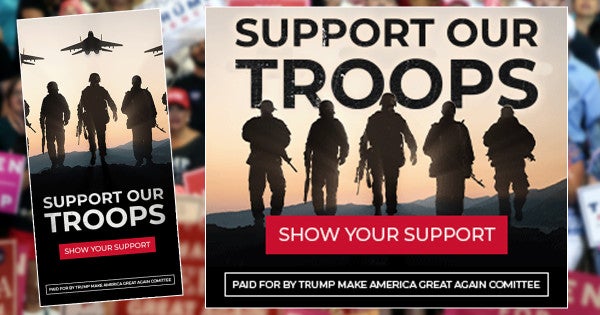 The banner ads from the Trump Make America Great Again Committee have been running since at least Sept. 2, according to a breakdown of the campaign's online ad spending provided by Google. The ads were first reported by Politico.

To be fair, the ad did not specify which troops should garner Americans' support.

As experts pointed out to Politico, the aircraft flying above the “soldiers” is the MiG-29, a twin-engine fighter first designed by the Soviet Union in the late 1970s.

Meanwhile, the silhouetted soldiers come from a stock photo on Shutterstock named “five soldiers of different armies” which shows men carrying a variety of weapons, including an American-made M16 and M4 rifle, Russian-made AK-74 rifle, and German-made G36K. Neither of the latter two weapons is in the U.S. arsenal.

“This is a completely recreated scene from various photographs of mine,” Arthur Zakirov, a photographer based in Perm, Russia who created the original stock photo used in the Trump ads, told Politico. “Today you hear about the Kremlin’s hand in U.S. politics. Tomorrow you are this hand,” he joked, adding that he found the use of his photo “pretty funny.”

The Trump campaign did not respond to a request for comment.

This is not the first stock photo flub for the Trump campaign. During the 2016 campaign, then-candidate Donald Trump tweeted an image of an American flag over stock imagery of men dressed as Nazi soldiers. The tweet was deleted and blamed on “a young intern,” according to The Guardian.

More recently, Rep. Brian Mast (R-Fla.), an Army veteran, made a similar mistake in Oct. 2019, when he posted a photo of a Russian warship to Twitter to celebrate the birthday of the U.S. Navy.

And even the supposed experts on military affairs and weaponry occasionally get it wrong: The Pentagon in March tweeted a photo of “tanks” that were definitely not tanks, and in May the U.S. Army chief of staff shared a video of a German Army tank when he meant to share an M1 Abrams.

But once again, there is a tweet for everything:

No surprise. @DNC displayed Russian ships in tribute to vets http://t.co/Q6BpWj0I Did they mean to honor the Russians?

Related: These Stock Photos Supposedly Portraying Service Members Are All Kinds Of Fail