As veterans, anytime we scroll through Facebook, play around on Twitter, or even change the channel on the TV, we’re... 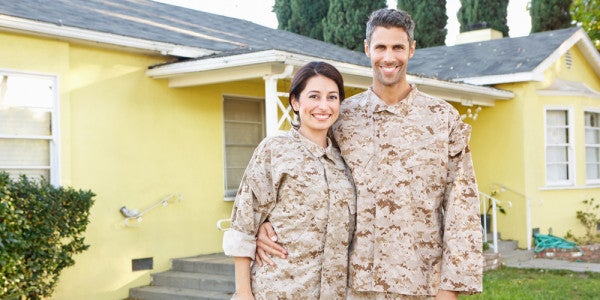 As veterans, anytime we scroll through Facebook, play around on Twitter, or even change the channel on the TV, we’re inundated with ads designed specifically for us. Whether it’s a college that wants to get a slice of that G.I. Bill money cake, or some boot company trying to get veterans to buy another pair of uncomfortable footwear, current and former service members are prime targets.

Personally, I don’t really mind it, after all they’re rarely eye-catching enough to make me stop what I’m doing mid-scroll, though there are some exceptions, like this:

Now, I’m not sure if this ad is a sign of complete ignorance on the part of both the photographer and company that thought this was the photo that was going to win over their audience, or if it’s actually a masterful plot to get vets to come out in droves to point out everything wrong with this image. Either way, someone get this man a razor.

The advertisement, which is for Saint Joseph’s University Erivan K. Haub School of Business, was taken down 72 hours after running on LinkedIn in February 2017. A spokesperson for the university told Task & Purpose that the photo was a regrettable error and that the student portrayed in the photo is a retired Army officer and not a stock-photo model.

The use of terrible stock photos seems to be pretty common; there are scores of these out there.

That’s why I decided to wade through the endless deluge of terrible stock photos on the internet and then mock them ruthlessly for your (and my) enjoyment.

Glossing over the completely out of regulations haircut, there’s a lot of problems with this guy’s uniform, making it seem like he just walked into a military surplus store and started grabbing patches, pins, and badges from a bin. The cover he’s wearing doesn’t appear to be a U.S. Army cover and the emblem on top doesn’t belong to any U.S. military branch as far as I can tell. The jacket’s off too — it doesn’t have the right buttons — and nothing is in the right place. The ribbons even look like they’re either from a foreign country or are actually a house-paint color swatch from Home Depot.

Ah yes, here’s a photo that clearly speaks to the innate courage, selflessness, resolve, and pride inherent in all soldiers. After all, nothing says pride of self and conviction to cause quite like posing with a fluffy, curly-haired dog whose breed ends with the word “doodle.” Not to mention the fact that her collar is buttoned, and she doesn’t appear to have any rank, name tapes, or unit patch. Grooming standards and uniform regulations? Who needs ’em, am I right? Let those beautiful long locks flow.

The base housing cultists.

Looking like a modern military version of Grant Wood’s “American Gothic,” this has to be the creepiest looking military couple I’ve ever seen. From the randomly cuffed sleeves on the woman’s blouse, to the fact that they both have the last button on the collar done and don’t have any nametapes, these two don’t even look like Marines. Instead they look like the prime suspects in a military investigation into cult activity on base. Just look at those dead eyes and horrifying smiles. If you’ve been on base housing you know that’s not as far fetched as it sounds.

The intent may have been to take a photo that captures the courage and strength of the military’s frontline troops, but what we have here is a picture of a guy who clearly just returned from battle where he and his airsoft team riddled the enemy’s bodies with tiny plastic balls. From the four rifle rounds stuffed into his MOLLE vest, to the operator hat, nothing says, “I like to pretend to fight for freedom” quite like a posed photo of some random airsoft ranger running around with an American flag.

Anyone who’s served in the Marine Corps knows that the quality of a Marine’s life while in garrison is entirely dependent upon how recently he got a haircut. Which raises the question, how is this guy so damn happy — he should be in tears from all the ass chewings he must have gotten on his way home from work. Next, there’s his cover, which is missing the eagle, globe, and anchor. He also has no name tape above his right breast pocket or “U.S. Marines” above the left pocket. I have a theory though: Maybe he’s not a Marine, but a Marine recruit who’s been wandering base housing after he escaped from Recruit Depot San Diego during Receiving — the first few days of recruit training before you get assigned to your platoon. It explains the jacked up uniform, and cover, and why he has the top button buttoned up, since you only do that during Receiving on the West coast.

Looking like he’s in the middle of a really intense game of “Angry Birds” and about to negligently discharge his weapon — weapon’s safety is for newbs — this guy is what happens when the airsoft operator actually goes and enlists in the military. Rocking goggles that look like they’re for swimming, nothing about his uniform or his gear has any, well, uniformity. The pattern on the blouse and trousers appears to be German — just a hunch based on the flag on his left shoulder — but the cover for his kevlar looks like the Army’s universal camouflage pattern, and so does the vest. He’s also got a holster that looks like it saw service in Grenada, a pair of knee pads that look like they came with roller blades, and I’m pretty sure I saw those boots in an L.L. Bean catalog a while back.

UPDATE: This article has been updated to include additional information from Saint Joseph’s University Erivan K. Haub School of Business. (3/9/17; 12:41 pm)