Everyone Is Gone On Leave And You’re Alone At The Barracks. What To Do…

Spring is here, along with plans for road trips and getaways on those few precious three and four-day weekends that... 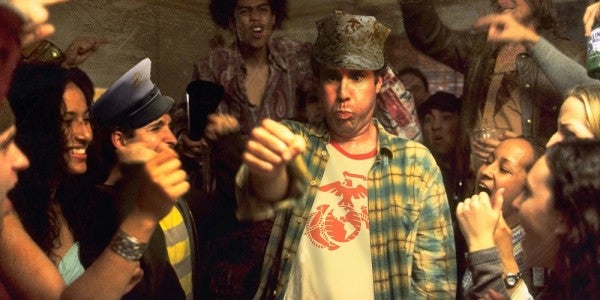 Spring is here, along with plans for road trips and getaways on those few precious three and four-day weekends that come with federal holidays. As everyone else funnels off base or packs before an early morning departure, you can’t help but think: Bye, suckers.

Unlike those healthy people with social lives and no aversion to fresh air or sunlight, you’ve got it figured out. You know that a long weekend is the one time you can actually get some peace and quiet in your empty barracks — or raise hell with impunity.

Take advantage of it and lock yourself in your room. Or strut around the catwalk in a flak jacket, silkies, and a snorkel if you want. You’re finally free to be the belligerent Marine, airman, soldier, sailor, or person who identifies as an attack helicopter that you always wanted to be. Here’s how to make the most of that me-time, hour by hour.

10 a.m. — Wake up with a splitting headache from the previous night’s drinking. Roll out of bed carefully to avoid knocking over empties as you reach for a bottle of water. (Avoid the yellow one.)

12 p.m. — You prepare to saunter over to the chow hall with a five o’clock shadow and no belt on your pants. But why risk an ass chewing? Instead, take the pants off and order food from that one combo Chinese/Mexican/American restaurant just outside the base main gate. You know, the one with the ambiguous name: Golden Dragon Fiesta Burger.

There's always that one guy who goes into a long weekend like he's trying out for Hoarders.T&P; photo illustration/Aaron Provost

3 p.m. — Once you’ve had your fill of nachos, crab rangoon, and fried chicken, it’s time for a beer run to the PX. You might get lucky: Most of the lifers are at home hazing their children instead of you, so no need to shave.

3:20 p.m. — You should have shaved and probably ditched the flip flops. But if you were quick on your feet, you probably gave that angry staff sergeant a fake name. No way he’ll realize Lance Cpl. Jacque Strahpé doesn’t exist.

5 p.m. — With a fully stocked mini-fridge and a fresh beer in hand, you decide that a solo “Netflix and chill” sesh is too sad a way to spend a whole day off. So you do what every other lonely enlisted person does: Hop on your Xbox or Playstation and annihilate scores of batshit cultists in Far Cry 5.

If open-world sandboxes aren’t your thing, that’s cool, lure the other barracks rats over for round-robin matches of Call of Duty: WW2, or sludge through the trenches in Battlefield 1.

9 p.m. — Time to blast the EAS Song or Avicii's Hey Brother on repeat from the third deck as you try in vain to start a party with the six other people in the barracks. Do not be deterred by the duty watchstanders who occasionally trudge up to your deck to tell you animals to shut up and turn that shit off. They’ll eventually get tired and give up.

Don’t stop to consider this was all probably written down in the logbook — that’s a problem for tomorrow morning.

6:30 a.m. — Your sergeant is pounding on your door and standing outside in PT gear with that “I’m going to murder you with motivation” look in his eye. Apparently he’s friends with the duty.

You should have turned the damn music down.

6:52 a.m. — After the third time you puked on that five-mile run, you started to feel a lot better. Plus you’re easily five pounds lighter.

9 a.m. — Now might be a good time to shower and drink some water.

12 p.m. — It’s probably time to leave the base for a little bit. As long as you’re sedentary, it still counts as a staycation. Hit up Avengers: Infinity War with your fellow barracks stragglers, then complain about how officers always get to do what they want. If Captain America can have long hair and a sweet beard, why can’t you?

4 p.m. — Back at the barracks, break out a deck of cards. Not for spades; that’s for high-stakes games in the field where the winner takes all the Grizzly and Copenhagen. Instead, sit around stringing together Duffel Bloggy statements with “WTF, Over?” or one of the manyother “Cards Against Humanity” military-knockoffs. (“ISIS just claimed responsibility for… banning chairs in the Air Force.”)

7 p.m. — Everyone else has gone out in town to the local bars or strip clubs to have a few drinks and search for love. But not you. You’re not going to fall for that again.

Fortunately, this is the age of super-specific dating apps. Do a few push ups and crunches and slip into your tightest undershirt, then take a few profile pics for your MilitaryCupid.com, MilitarySingles.com, and UniformDating.com profiles. Make sure to get that moto tat in focus. Then wait for the honeys to come flocking.

This is probably what a Tinder conversation looks like in every military town.Task & Purpose photo illustration/Aaron Provost

12 a.m. — Depressed and feeling dejected after your potential partners ridiculed you for being “a dumb boot,” you hit the rack. You should have read our article on military dating sites.

9 a.m. — The last day of your long weekend. Wake up with a slice of leftover pizza and a video stream. Instead of starting a new series, binge watch Band of Brothers again and then weep at the realization that no televised war drama will ever be as good.

2 p.m. — Open the door or a window to clear your room of the carb-fart smell.

That feels pretty good: Outside. Sunlight. Breathable air. Hmm, maybe you should crack open a book, okay, sure, a beer, too, and sit out on the catwalk like the cultured warrior scholar you are. Take your pick from Mad Dog’s reading list and sit down, then carefully pose the book on your lap, cold brewsky in hand, and take copious photos to prove to the world just how educated you are.

How most of us actually made it through the commandant's reading list.T&P; photo illustration/Aaron Provost

2:10 p.m. — Photo shoot over, you reach for a book you’ll actually read, like the Terminal Lance Ultimate Omnibus or Matt Young’s Eat the Apple. If picture books with a gritty vibe are more your style, there’s Sheriff of Babylon, a graphic novel set in the early days of the Iraq Invasion.

3 p.m. — Try to get some of those toxins out of your body before morning PT tomorrow. Head on over to the gym, and try out a different playlist — you can only listen to the same thrash metal song so many times, but it’s cool, we’ve got you.

5 p.m. — Fitness goals achieved, time to head back to the barracks to unwind for a few hours before work in the morning.