Tom Brady: Football season is ‘like you’re going away on deployment in the military’

Thank you for your service? 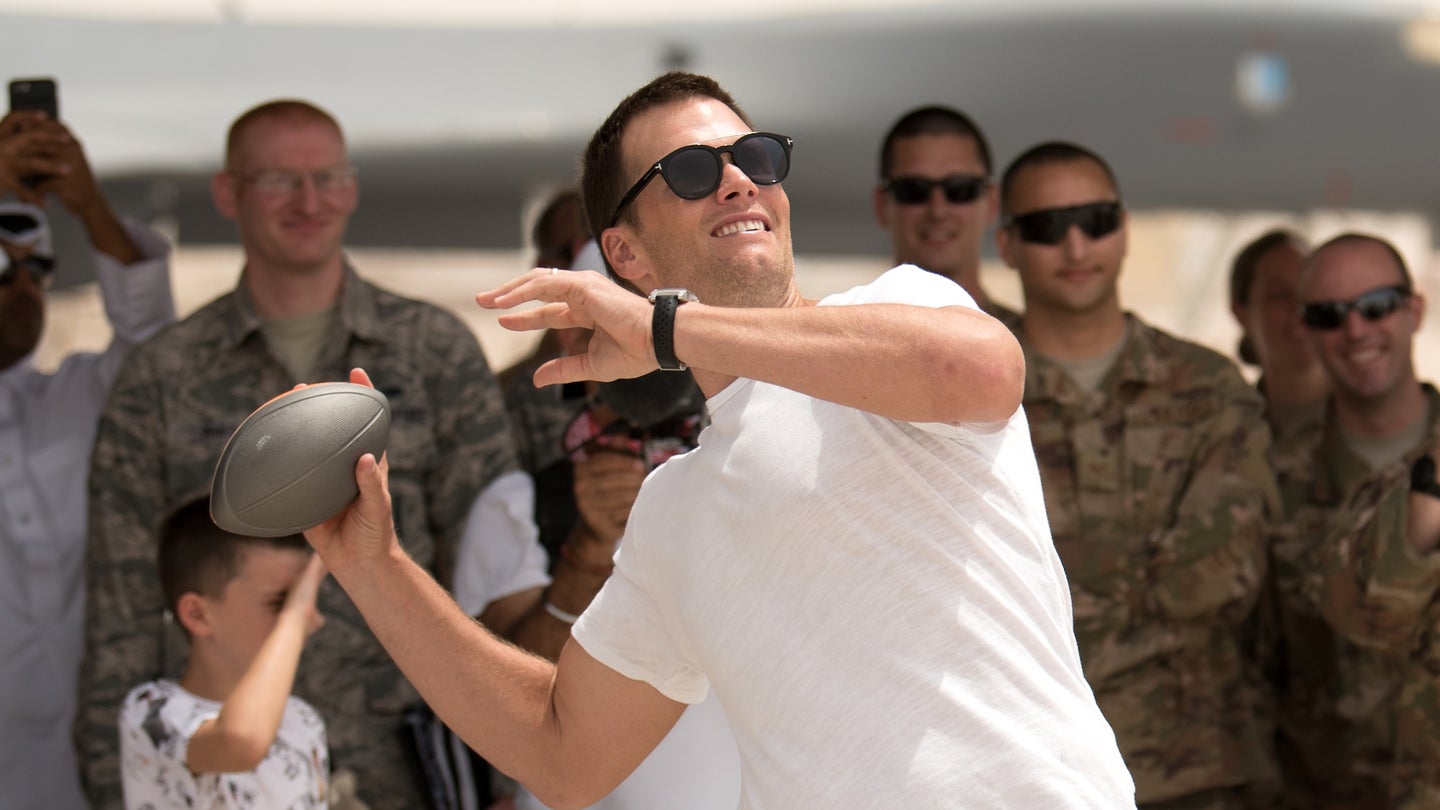 Tom Brady has a fresh request for his legions of adoring fans: thank me for my service.

The Tampa Bay Buccaneers quarterback and undeniable American icon recently offered up a nonsensical and tone-deaf interpretation of playing in the National Football League, comparing his run as one of the highest-paid professional football players of all time to an overseas deployment as a member of the U.S. military.

“I almost look at like a football season like you’re going away on deployment in the military, and it’s like, ‘man, here I go again,’” Brady, who’s played in the NFL for 22 seasons, said during a Monday interview with the ‘Let’s Go’ podcast with Kevin Durant and Jim Gray. “There’s only one way to do it. And I think Jim, we’ve talked from time to time just about how do you enjoy the certain moments of it?”

“The reality is you can really only be authentic to yourself, right?” Brady continued. “Whenever you may say, ‘Oh man, I want to, you know, make sure I spend a little more time doing this.’ When it comes down to it, your competitiveness takes over and as much as you want to have this playful balance with the work balance, you’re going to end up doing exactly what you’ve always done, which is why you are who you are. You’re going to go, ‘how the (expletive) do I get it done?’ You know, ‘what do I got to do to get it done?’”

Such a comparison is, well, sort of batshit crazy. But we can’t help but wonder: are there elements of Brady’s football career that actually resemble time spent in the military? Does Brady’s comparison actually stand up under scrutiny?

Rank: For the purposes of this thought experiment, Brady is effectively the senior noncommissioned officer on every team he plays for, as perfectly captured by his recent outburst at his offensive line in their recent loss to the Pittsburgh Steelers (Buccaneers coach Todd Bowles and Brady’s old New England Patriots boss Bill Belichik and their respective underlings are the officers, obviously). More importantly, Brady is probably the smartest person in the organization but has to take orders from people who stare at computers all day, which is basically life as a senior enlisted leader.

Pay: An active-duty senior NCO (E-7 to E-9) in the U.S. military can make anywhere from $5,789.10 a month (or just under $70,000 a year) to $7,056.90 a month (just under $85,000 a year) depending on how long they’ve been in the service, according to payment data analyzed by the Defense Department’s Military OneSource program. Troops deployed to designated combat zones can also receive special pays and incentives to augment their monthly basic pay, including Hostile Fire Pay, which is up to $225 per month.

By contrast. Tom Brady’s original two-year deal with the Buccaneers was worth $50 million, with his 2021 contract extension adding an additional $25 million to his pay. And this is outside of all the businesses and investments Brady has attached himself to over the years and, uh, questionable perks he enjoys as life as Tom F–king Brady.

Operations and Lifestyle: This is the most obvious place where Brady’s comparison starts to fall apart. Life during a military deployment can be uncomfortable, lonely, and exhausting; for those deployed to combat zones, there is an imminent and serious threat of bodily harm or death at the hands of an armed adversary, far from the final embrace of loving family and friends. It is not an ideal situation for anybody involved, and no amount of special chow hall meals can change that.

While Brady certainly enjoys a regimented lifestyle, it’s not THAT regimented — he even bailed on practice to attend Robert Kraft’s wedding the weekend before his podcast comments, something that would earn him a chewing-out at least in the military.

If each football game is a mission outside the wire, Brady gets to return from each excursion to world-class facilities, massage therapists, sports trainers, dieticians, chefs, and tons of other personnel who dedicate their lives to keeping him healthy; when you return from a mission on deployment, you usually come back to your rack along with bottles filled with dip spit, and a “doc” who is inevitably going to tell you to change your socks. When Brady visits The Deid, he does not live the same lifestyle as the other NCOs on base. And sure, while Brady may be at more of a risk of a (specific) major brain injury every time he steps foot on a football field than the average deployed service member, at least he’s not getting shot at or blown up every day.

Honors: Tom Brady has seven Super Bowl rings. Service members can sometimes wait years to be appropriately recognized for their bravery. It took 16 years for Air Force Tech. Sgt. John A. Chapman to be posthumously awarded the Medal of Honor for sacrificing his life to save other special operators in Afghanistan Operation Anaconda in 2002.

Family: OK, so Brady actually did marry a supermodel and play Division 1 football, unlike the new E-2 that just showed up to your unit who turned down a full-ride to a Power 5 school to serve his country and whose girlfriend is totally a Canadian supermodel, which is probably a bad case of catfishing anyway.

But here’s where the football-deployment comparison actually works given Brady’s current marital problems. Deployments do put a strain on marriages: A Army Mental Health Advisory Team study of NCOs deployed during the height of the U.S. campaigns in Iraq and Afghanistan found that the likelihood of divorce among them jumped dramatically the longer their deployments lasted. When you love work more than family, there are consequences, and Brady is clearly discovering that for himself.

Mission: Brady plays football to entertain the masses. U.S. service members put their lives on the line to protect their freedoms. These two things are not the same.