In the last two hours of his life, Air Force Tech. Sgt. John A. Chapman saved the lives of a... 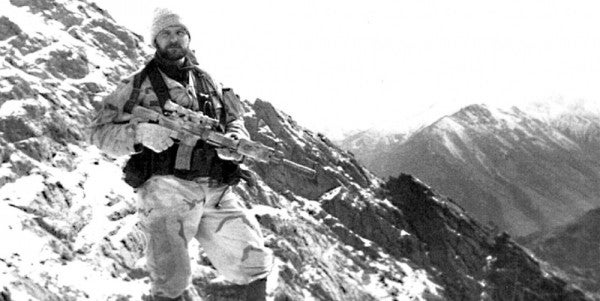 In the last two hours of his life, Air Force Tech. Sgt. John A. Chapman saved the lives of a special operations teams by sacrificing himself to stop the enemy from shooting down a helicopter carrying reinforcements to the battle.

“In this final act of supreme courage, John gave his for life for his fellow warriors,” President Donald Trump said on Wednesday as he posthumously awarded Chapman the Medal of Honor. “Through his extraordinary sacrifice, John helped save more than 20 American service members.”

Chapman is the first airman since the Vietnam War to receive the nation’s highest military award for valor. He has finally been fully recognized for his heroism more than 16 years after he took part in Operation Anaconda, which resembled“Black Hawk Down” in the snow.

“It’s been a long road coming. But it doesn’t change anything as far as the pride of all these people,” Chapman’s widow Valerie Nessel told reporters on Tuesday. “We’ve always been proud of him and this doesn’t make us any more proud of him.”

On March 4, 2002, Chapman and his teammates were on a reconnaissance mission, unaware that the mountaintop where they were supposed to land was actually an enemy stronghold. During their approach, their helicopter was hit several times by rocket-propelled grenade, and Navy SEAL Petty Officer 1st Class Neil Roberts was thrown out of the aircraft.

All of the team survived when their helicopter made a controlled crash and they decided to return to the mountain to try to save Roberts, knowing the odds were against them.

Related: Medal of Honor Nominee John Chapman Is Getting a Film About His Life

Chapman was originally awarded the Air Force Cross for charging uphill in thigh-deep snow, single-handedly capturing an enemy bunker, and allowing the rest of his special operations team to find cover.

“John said: ‘There is the danger, directly in front of me. If that doesn’t stop, everyone will die.’” Chapman’s former commander retired Col. Ken “RZ” Rodriguez told reporters. “His team leader said, ‘John’s actions saved all of us.’ That was what we based the Air Force Cross on when it was initially awarded many years ago.”

When Chapman was wounded and knocked unconscious about 17 minutes into battle, his team leader assumed that he had been killed, ordering the special operators to move to a new position, said an Air Force special tactics officer who spoke to reporters on condition of anonymity.

But an exhaustive 30-month investigation into Chapman’s actions determined that the tactical air controller kept fighting for another 70 minutes after his teammates thought he was dead, the special tactics officer told reporters. Chapman’s actions delayed the enemy at a critical moment as they were preparing to shoot down a helicopter with a quick reaction force.

The forensic evidence showed that Chapman had been fatally wounded while firing at enemy fighters equipped with rocket-propelled grenades, who had already shot down two U.S. helicopters, the special tactics officer said. It was broad daylight when he ran into the kill zone, turning his back on an enemy bunker with a heavy machine gun only 10 meters away. At point blank range and with no cover, his chances of survival were non-existent.

Chapman knew how much danger he would be in by attacking the enemy fighters with RPGs, Rodriguez said.

“He’s already been wounded multiple times and now he sees the quick reaction helicopter coming in and he came out from cover and exposed himself to very accurate enemy fire,” Rodriguez said. “Now, John would never say, ‘I know for a fact I won’t get through this.’ John was very much: ‘I’ll do whatever I can to get through this.’ But he knew in heart of hearts – I am convinced – he knew what kind of danger he was exposing himself to – the enormous risk he placed himself in – when he stepped out to defend that quick reaction force helicopter and the lives of the men onboard.”

The Air Force’s analysis of Chapman’s heroism came after then-Defense Secretary Ashton Carter in 2016 ordered all of the military services to assess if any service members had been overlooked for higher valor awards for their bravery in Iraq and Afghanistan. After considering 50 cases, the special tactics officer said, the Air Force decided to focus on Chapman.

Board members only had statements from four witnesses when they recommended Chapman for the Air Force Cross in July 2002. But the investigators had access to a wide variety of evidence – including classified information – that showed Chapman continued to fight, move, transmit on his radio, and take other actions after his team thought he was dead, the officer said. Indeed, enemy fighters continued to talk over the radio about an American fighting on the mountain after Chapman’s team had left, and Chapman fired almost all of the 210 rounds he had been issued, indicating he had fought to the end.

“It’s finally a validation for what he had done on the mountain,” Nessel said of the forensic evidence of her late husband’s bravery. “We’re lucky enough to have newer technology to help us prove what happened there. It’s an amazing honor.”

Both Nessel and Chapman’s mother Terry feel that his team leader made the right decision to evacuate the wounded and move to a new position after Chapman had been rendered unconscious and presumed dead.

“I don’t believe, personally, that he was left behind,” Nessel said. “Each of those men were doing what they were trained to do at 10,000 feet and in waist-deep snow. We can’t Monday-morning quarterback anything. Each of those men are heroes.”

“And Johnny would have wanted them to do just that – to take their wounded off the mountain,” said Terry Chapman.

Chapman’s sister is Lori working on a book about his life that will include his role in the battle, Nessel said. When asked if the family has a preference about who might play Chapman in a movie based on the book, Terry Chapman said his sister has an actor in mind: “I think Chris Pratt.”

UPDATE: This story was updated on Aug. 22 with a comment from President Trump.