Editor’s Note: This article by Matthew Cox originally appeared onMilitary.com, the premier source of information for the military and veteran community. Soldiers... 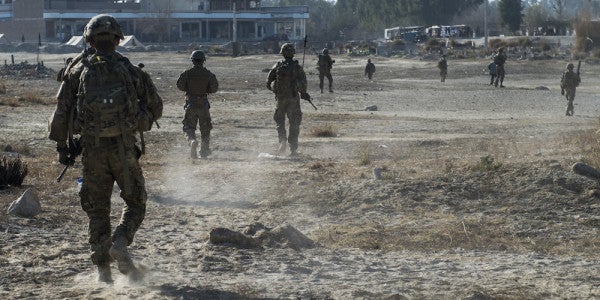 Soldiers from the 10th Mountain Division had just finished clearing a remote compound with Afghan security forces in southern Afghanistan's Helmand province when the Taliban opened up on them.

“When I tell you that the sky lit up with enemy fire — RPGs, mortars, small-arms fire — it literally lit up the sky, that's how much we were getting shot at,” said Spc. Myles Shoemaker, an infantryman with 1st Battalion, 87th Infantry Regiment, 1st Brigade Combat Team, recalling the October 26, 2017, firefight with Taliban forces.

“That will always be in my mind, just seeing bullets and tracers come over your head, snapping and whizzing and hitting things in front of you. It was pure chaos, but I felt very calm during the entire situation, like I knew what I was doing the entire time,” he said.

Shoemaker's unit was advising and supporting Afghan forces as part of Operation Freedom's Sentinel, the military mission that began in Afghanistan at the close of formal combat operations in late 2014. Today, the Army's new 1st Security Force Assistance Brigade has taken over that train, advise and assist mission in Afghanistan.

The October 26 battle, recently made public due to valor awards given for heroism in the fight, offers a snapshot of the dangers U.S. troops continue to face quietly as they fill supporting roles in the country, far from the public spotlight.

The force of about 70 Afghans and U.S. soldiers had air-assaulted into the area with four CH-47 Chinook helicopters that night to search compounds suspected of Taliban activity.

The mission started off uneventfully, until a force of about 50 Taliban fighters ambushed the Afghan-led operation, killing one Afghan soldier and wounding one U.S. soldier and another Afghan, troops who participated in the operation said. Before it was over, the Afghan forces began to unravel, and leaders from the 10th Mountain were forced to take over before the situation turned disastrous.

1st Lt. Tyler Wojtasinski, who commanded the battalion's 1st platoon, A Company, remembers that elements of the combined Afghan-U.S. unit had reached an open field after clearing the compound when they were hit by an “intense volley of fire.”

“At first, it was just trying to get some situational awareness as to where everybody was,” he told Military.com on Monday.

The Afghans and Americans pulled back to the compound in search of cover. A rocket-propelled grenade exploded, wounding U.S. Army Spc. Shamire Groce and two Afghan soldiers.

“They all got hit by that RPG round; he took shrapnel,” Wojtasinski, 25, said, referring to Groce.

Once consolidated in the compound, Wojtasinski said he realized that many of the Afghans were not posting their own security and firing back at the Taliban.

“It was madness in the middle of the courtyard … there was lots of yelling. We just needed to get some control on the situation,” he said. “The Afghans weren't pulling security; they shut down a little bit and we had to step in. Up until that point, it was an Afghan-led operation, but at that point, we said, 'OK, we have to establish security and we have to fight the fight.'

“It was just a lot for them to handle,” he continued. “They wanted to help the individuals who were injured. It was just about knowing what we needed at the time, and what we didn't need were 20 people standing over three casualties.”

One of the Afghan element's casualties was a machine gunner. Realizing this, Shoemaker picked up the unit's M240B machine gun and carried it to the rooftop position Wojtasinski had established to get better vantage point to engage the attacking Taliban.

“When we got up on the roof, the first thing I did was get down; I got down as low as possible. There were bullets snapping over my head,” Shoemaker, 20, said.

With the help of his fellow soldiers, Shoemaker started identifying and engaging targets with the M240 at distances as far out as 300 meters, he said.

“It was dark and I was using my night vision on my helmet,” Shoemaker said. “The people that I could see moving toward us, I could also see shooting at me … there were a couple more popping up and down and then a couple more to the left and right of them.”

The Afghan M240 had been poorly maintained and malfunctioned several times, forcing Shoemaker to switch to his M4A1 carbine, while other soldiers got the weapon working again.

“When they got within 100 meters of myself, they were kind of showing a pattern when they were popping up … and I specifically remember putting my M4 on auto,” he said. “I kind of just guesstimated where this guy was going to pop up, and he popped up, and I let him have a five-to-eight round burst. And after that, he didn't pop up again.”

Spc. Brad Cook helped carry one of the wounded Afghans to where he could be treated.

But the Taliban fire began to intensify.

“It got to a point where we needed to pick up and move,” Cook, 22, said. “They were bracketing mortar rounds in on us.”

Cook assisted American sergeants and other Afghans in treating the three wounded while waiting for the medevac helicopter to arrive.

“They landed the helicopter inside of the compound,” he said. “I'll give the flight crew a lot of credit … they landed that helicopter with maybe two feet on each side of the rotor. It was a tight fit, and they took that risk to do it.”

The wounded were flown to a military hospital, where one of the Afghans died. Groce and the other Afghan recovered from their wounds, Wojtasinski said.

The company commander worked with an Air Force combat controller to bring in some “strafing gun runs,” which began to turn the tide of the skirmish, he said. He added that he couldn't recall which aircraft the Air Force called in.

The unit pulled back to a safe distance, and Air Force “jets came back and dropped bombs” on the Taliban, ending the fight, he said.

For their actions, Wojtasinski, Cook, and Shoemaker were awarded the Bronze Star with Valor at a June 14 ceremony at Fort Drum, New York.

During that 2017 deployment, there were other missions, “two or three” other firefights, but none of them matched the intensity of that one mission, Wojtasinski said.

Some of the Afghan units were well-seasoned, hard fighters. Other Afghan units, like the one that Wojtasinski's unit accompanied on Oct. 26, needed work.

“They were the company that needed the most work, they were getting these influxes of new soldiers,” he said. “They always progressed. A lot of the Afghans we fought beside … they all had their strengths and weaknesses, but they were extremely dedicated to their country and they just got better and better with each operation.

“It's just the smaller details of coordinating together, those little things that make a force lethal,” he added.