The Dog I Brought Home From Afghanistan Actually Rescued Us 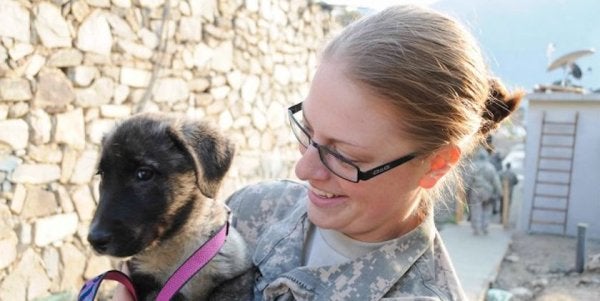 It was getting close to Christmas. Snow was evident on the lower peaks of the Hindu Kush and I was thinking of home while working on a cigarette.

Frank and I took a position on the edge of a canal, sheltered by some small trees. From there, we had a good view of the main road and the mountains while we provided perimeter security for our team. After piling in my usual three pieces of gum post-smoke, I noticed the tall grass move in front of us, and I motioned to Frank. We watched closely as a brindle puppy with white paws and half of a tail emerged. She caught sight of us and stopped, startled and scared by our presence.

Some older Afghan kids gathered around. They were quite entertained by the Americans making such a big deal over a wild puppy. They started to pick on her and throw rocks. Dogs are not pets in Afghanistan. This is primarily because they are used for protection and many have rabies. She quickly disappeared into the field, and I thought that was that.

But the little pup, who wasn’t more than 6 weeks old, kept coming back. Street dogs were something of a norm on our day-to-day missions, but this one got to us. It seemed silly, even pathetic, in a war zone. But it was honest. There was something about her eagerness to stay with us that reminded me of home.

At the time I had no intention of keeping her nor did I even think it was possible, but I knew some of the Special Forces operators were known to have a dog from time to time and perhaps they would keep her out of harm’s way. I decided to ask my platoon sergeant if we could take her back with us.

And with that one of our gunners took his pack off and put the pup inside, zipping it up just enough so her head popped out. She made it all the way back to base in that backpack.

The first night, I caged her in with ammo cans and a towel. It didn’t take long before she began to whimper and whine. I picked her up and nestled her next to me. She soon went to sleep. We weren’t sure she would make it once we realized how weak she was, but with a few days of beef jerky, Izzy pulled through.

That Christmas Eve, I went to call home and a couple of the guys agreed to babysit. Meanwhile, our commander went around each barracks to say Merry Christmas and check on us. When I returned, he was standing over Izzy and staring at me. I’ll be honest, my stomach was in my throat at that moment. It’s against regulations for soldiers to keep pets and I assumed I’d lose rank or worse. They didn’t dime me out and denied saying whose dog it was. Instead, the colonel took me outside the room where I explained it was my idea to take her. He asked if I had a plan for her and if not, I needed to get one. But otherwise — he didn’t see anything.

The pup, who I quickly named “Izzy,” since the guys were going to keep calling her “Snatch,” wasn’t able find a home with the SF troops, but instead stayed hidden in our barracks for a month. The other options: Dump her somewhere or see her get shot on the base.

Out of pure luck, I found a nonprofit through a friend called the Puppy Rescue Mission, which helped coordinate her trip to the States. But I had to get her to Kabul first, which was roughly seven hours away. There was no way that was possible. To my amazement, one of our Afghan partners agreed to take her. His family would drive the seven hours to get her to a dog shelter. Even now, the fact they did that still baffles me.

I thought there was a good chance I wouldn’t see her again, but three months later, we reunited in Iowa when my unit came home.

As we prepared to celebrate our seventh Christmas together, I look back on that first one fondly. Izzy was certainly a morale boost for all of us involved in her quiet, yet intricate “rescue operation.”

I like to think she rescued us. She distracted us from exhaustion, complacency, and being far from home when she wandered into convoy briefings, howled at us in the early morning, and gnawed on all our boots.

But for me, she became more important when I returned. When I was alone and I didn’t have a mission anymore. When the nights were equally long, but more quiet and palpable with angst. When I was back in my college apartment, trying to relate to final exams again, she reminded me of what mattered.

Izzy has cancer now. But she’s doing well due to a cocktail of medications. As long as she has quality of life, I can’t give up on her. It might sound absurd given she’s a dog, but it’s the least I can do for the battle buddy who protected me against enemies both real and imagined, who trained me for a marathon I never thought I could do, pulling me up the last hill on training runs and bounding back to encourage my slow ass to keep going, for the dog who climbed a mountain with me in a snowstorm and slept with me on the side of the road halfway across the country.

But I didn’t write this for Izzy. She’s a dog after all and can’t read. I wrote this for all those people who helped me get her home, so they know how much that meant to me. I wrote this for Ebbs and Jess, who bathed her that first night and helped me take care of her; for Cloker who made her a crate from scratch material with his bare hands; for the guys who babysat her when I made a call home or went outside the wire; for Doc Adams who gave her needed vaccinations; for Shinn who helped me fundraise; for my commander who chose to have my back when he didn’t have to; for Kinney sparing his backpack to get her home that first convoy; for my sister who cared for Izzy countless weeks before I came home and took her in when I had no one else; for Puppy Rescue Mission for making it possible; for the woman in New York who picked up Izzy and gave her a place to stay on her way to Iowa; for the countless donations by complete strangers; and lastly but certainly not least, for the Afghan family that decided to help an American soldier save a wild dog by driving it seven hours to a shelter in Kabul.