Aretha Franklin, the legendary singer whose full-throated vocals earned her the undisputed title of “Queen of Soul,” died on Thursday... 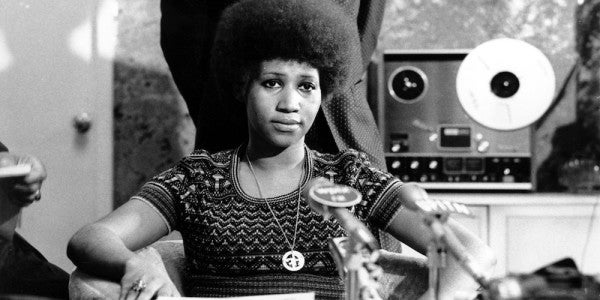 Aretha Franklin, the legendary singer whose full-throated vocals earned her the undisputed title of “Queen of Soul,” died on Thursday of pancreatic cancer at the age of 76, her publicist announced.

“In one of the darkest moments of our lives, we are not able to find the appropriate words to express the pain in our heart,” Franklin’s family said in a statement to the Associated Press. “We have lost the matriarch and rock of our family. The love she had for her children, grandchildren, nieces, nephews, and cousins knew no bounds.”

Franklin’s legacy spanned more than a half-century of groundbreaking achievements in music. Her hits “Respect” and “(You Make Me Feel Like) A Natural Woman” demolished the popular charts and reshaped the music landscape with anthemic, powerful vocals. Her songs earned her the honor of the first female inductee into the Rock and Roll Hall Of Fame in 1987, and she inspired generations of would-be divas who came after her.

But what many modern devotees to the Queen of Soul don’t realize is that Franklin happened to give the United States one of the most subtle protest songs of the Vietnam War — even if she didn’t realize it at the time.

The lyrics of Franklin’s 1967 single “Chain Of Fools,” released during the height of Vietnam, are relatively simple: the singer, after five long years of devotion to her would-be man, finds out she’s “just a link in your chain” to be used and abused:

I thought you were my man

But I found out, I'm just a link in your chain

Oh, you got me where you want me

I ain't nothin' but your fool

Ya treated me mean

Oh you treated me cruel

“Chain Of Fools” started out as an anthem of female independence. But after the assassination of Martin Luther King Jr. in 1968, according to Craig Werner and Doug Bradley, authors of We Gotta Get Out of This Place: The Soundtrack of the Vietnam War, African-American veterans returning home from Vietnam “transformed it into an angry rejection of the chain of command.” Here’s how Bradley recently described the song’s political impact for PBS:

Marcus Miller, an infantryman in the Mekong Delta during the war, said the song referred to the military “chain of command.” And David Browne, who’d grown up in Memphis and served with the 101st Airborne, recalls that when he first learned of the assassination of Martin Luther King Jr., while a soldier in Vietnam, the only thing that stopped him from “killing the first honky I met” was listening to Chain of Fools. “I thought, that’s my story,” and that chain is gonna break …

But Franklin’s music wasn’t about anger and rage — it was a source of comfort, a sliver of home, for the thousands of U.S. service-members deployed overseas to Vietnam.

“Although songs like ‘Chain of Fools’ and ‘Respect’ didn’t directly address the war, tapes of [Franklin’s] music became as essential a part of field kits as C-rations and morphine,” wrote Lee Andresen in Battle Notes: Music of the Vietnam War. “[Franklin] fondly recalls how Vietnam vets have expressed their gratitude for how her music helped them cope with the stress of war.”

Today, post-9/11 U.S. service members have “Let The Bodies Hit The Floor” by Drowning Pool as their anthem of choice. But 50 years ago, it was the Queen of Soul who accompanied American warfighters downrange — and for a generation of veterans, her music was the soundtrack of their own Forever War.