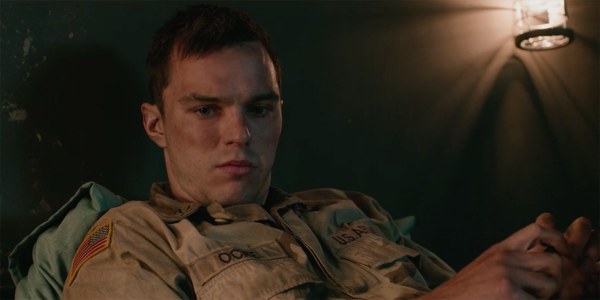 If it hadn’t been a year since Sand Castle’s release, and two since production, I wouldn’t trust myself to speak objectively about the film. The experience of actually making “the sausage,” as movie production is often called, would color my opinion too greatly. But time has passed, and with it most of the triumph, some of the heartbreak. And maybe perfect objectivity is impossible, but as the writer, the partial subject of the film, and the only person who rode shotgun with the story from its inception six years ago to its release, there is some insight that I feel uniquely qualified to offer.

Peter Molin’s review is right. Not right in the sense that it is unimpeachably correct, in criticism there’s no such thing, but “right” because it is deeply thoughtful. And thoughtfulness these days is in short supply, so when I see writing from that place of care, I’m inspired by it, I commend it, and I feel compelled to respond.

To be clear, though, it’s not Peter’s criticisms or praise that I want to address. Sand Castle, like all films, belongs to each individual viewer to make of it what they wish. It is the final question he posits to me that I’ve struggled to answer over the years and, having been confronted with it while perusing Task & Purpose, tonight felt like the right time to tackle my very complex feelings about the film. At the very least it’s a good excuse to procrastinate. Here is the conclusion of Peter’s piece:

What Roessner thinks of all this, I don’t know, but I’m curious if he is proud of Sand Castle’s modest achievement, or if he has regrets about how a better movie got away… Probably he’s just happy to have punched his ticket admitting him to LA insider status…

Proud? Yes. But probably not for the reasons you’d think. The process of making a film is so heartbreaking that, during the year of post-production, I put as much emotional distance between myself and the film as possible. For filmmakers, this is not an anomaly. But what was anomalous is that, in this case, the film was about my war experience. Film, I learned, is not the best medium for translating one’s deep, personal struggles. Once you commodify your life, it no longer belongs to you.That’s the hard reality.

But after the film’s release (my personal feelings about it aside) something miraculous happened. I heard from Gold Star families about how the film connected them, briefly, to their lost loved one. I heard from OIF and OEF soldiers who watched the film with their families, some of whom were veterans from past wars, and for the first time, they had a dialogue about their experiences. I heard from psychologists and therapists who told me they are using the film as a teaching tool to help vets with PTSD (I wish I knew how because the applicability escapes me). The point is, feelings about a finished film are rarely binary. But in this case, I feel nothing but pride that the film simply exists. Whether it is what I hoped it would be is totally and completely secondary in the face of the goodwill it’s managed to engender.

Modest success? Certainly modest in some ways, miraculous in others. The very existence of an independent war film whose primary objectives were avoiding hero-worship, conveying the incompleteness of OIF I, and showing the courage of both U.S. soldiers and Iraqi people, is no small feat in the current climate of a disintegrating film business. No one is more surprised that Sand Castle got made than me. I think one could make an argument for Sand Castle as modestly successful, an argument that I would in part agree with, but I also think a strong argument could be made for the miracle of any film making its way to production that doesn’t feature spandex, monsters, or laser guns in space.

Regrets? Yeah, I have a few. But I kind of think that’s par for the course. It’s been my experience that the final result of any creative endeavor is, at best, a facsimile of what you intended. In filmmaking, where there are millions of dollars on the line, actors’ schedules, limited days, and hundreds of people to manage, this is even more the case. I regret not writing a book instead; I regret not protecting myself better emotionally; I regret the naivety in thinking that my sincerity on the page would be enough to navigate the machinations of filmmaking.

But I don’t regret making the film. Not for a second. After all, writing the script came out of the same frustration I had with watching Hollywood churn out film after film that I found offensive, or melodramatic, or insincere, or without nuance. And if it’s one thing I f-cking hate (pardon my language) it’s people who complain and don’t get in the arena.

So I got into that arena. And what I learned is that there is a mountain of systemic issues working against veterans’ stories being told accurately. And the only solution to that problem IS MORE VETERANS IN KEY CREATIVE POSITIONS. Period. Full stop. Ghost Rider out.

You see, I came back from Iraq in 2004 and immediately went to Hollywood. At that time I was a bit of a unicorn, the only OIF vet kicking around town. Over the years, though, that has changed and I couldn’t be more hopeful about what my contemporaries and I are going to accomplish in coming years. It will take time, but I’m certain this generation of veterans is about to make a contribution to film not seen since the '40s and '50s. If anyone reading this is a veteran with cinematic aspirations, get to work. We need you.

Lastly, Peter’s final sentiment: “Perhaps he’s just happy to have punched his ticket to LA insider status.” I appreciate the use of “perhaps” to give some leeway, but I must say this is the one spot where the thoughtfulness wanes. It assigns to me motive, for writing the story, making the film, etcetera. And ones' motives can only be assumed and then projected. I assure you, writing Sand Castle was not a “career move.”

For those working in development in Hollywood, the idea of writing a maybe-true-story-about-the-Iraq-war-independent-film in order to achieve fame and notoriety is vomitously laughable. If I'd wanted to make a career move I’d have written SPACE MARINES and would be partying on a yacht with all my new “friends.” The other issue with this statement is the thought of me as “L.A. insider.” I mean, it’s probably more true than I’d like to admit, but as the son of a dad who died of a heart attack in the back of his semi-truck at a rest stop in Georgia, as the only person in my family with a college degree, as a nowhere kid from a nowhere place, the imagery I imagine that language conjures in the mind of the reader is akin to the Entourage lifestyle I am definitely not living and definitely not interested in. Hollywood glamor is a place I visit on occasion, but I sure as shit don’t reside there. I’ve managed, through a masochistic work ethic and inexplicable luck, to traverse every rung of America’s socio-economic ladder. This has screwed with my identity. As you’d imagine I’m sensitive about any moniker, be it “LA” or “insider” or “Hollywood” that strips my lived experience of nuance. I think that’s understandable.

So what does this all mean? The first thing it means is that we need more veterans in Hollywood. The key to representation in popular culture, for any in-group, is for that that in-group to have creative power. Without it, we will be lost. The second thing this means is that I’m both proud of and heartbroken by the film. The third thing it means is that my feelings are irrelevant because heartbreak is inevitable.

And the final, most important thing this means — I just realized — is that I must put together a pitch for SPACE MARINES. Immediately.

Chris Roessner served 14 months in Iraq as a Civil Affairs soldier attached to the 4th ID. He is the screenwriter and EP of Netflix’s ‘Sand Castle.’ He holds a B.A. in Poetry and M.F.A in Film, both from the University of Southern California. He is a Pat Tillman military scholar.