Who’s Behind The Mysterious Airstrike On The Afghan-Tajikistan Border?

Armed clashes erupted at the Afghan-Tajikistan border on Monday, though questions remain about who exactly was involved in the skirmish... 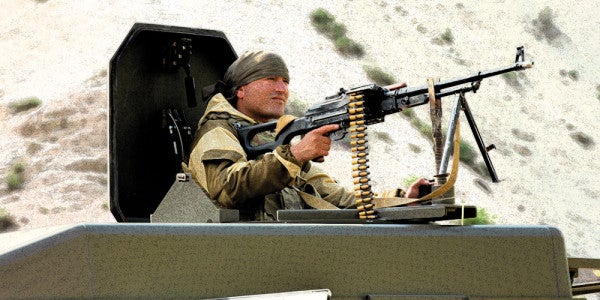 Armed clashes erupted at the Afghan-Tajikistan border on Monday, though questions remain about who exactly was involved in the skirmish and in what capacity.

Ten people, including two Tajik forestry officials, were reportedly killed in the fighting, which occurred in Afghanistan’s northeastern Takhar province. According to The Diplomat, the other casualties were “either smugglers or Taliban” killed by an airstrike unleashed by an unidentified aircraft that Afghan officials believe was of “either Russian or Tajik origin.”

Who exactly was initiated the clashes, however, remains ambiguous. Afghan government officials claim that the clashes occurred on the Afghan side of the border. And the Taliban denied that the gunmen identified by Tajikistan as drug smugglers were affiliated with the group, let alone any involvement in the incident more broadly. While this is a dubious assertion given the groups’ reliance on drug trafficking for revenue, a Taliban spokesman reiterated that in a statement to the New York Times that its fighters are solely focused on fighting the Afghan government

Lt. Azimov Farzod, company commander of the special company, Tajikistan Peacekeeping Battalion of the Mobile Forces, receives information from one of his soldiers at a traffic control point at a mountain training camp outside of Dushanbe, TajikistanDepartment of Defense

The same goes for the fatal airstrike that ended the confrontation. A spokesman for Tajikistan’s Forestry Service in the region would not confirm that two forestry officers were killed, and the same Tajik government official also denied carrying out an airstrike. Tajikistan is not incapable of providing close air support on it’s borders: Despite its lack of overall military power, the country does have several L-39 jet trainers which have been photographed armed with 57mm UB-16-57-U Rocket Pods and several Mi-24 Hind Helicopters, which gained infamy during the 1980 occupation of Afghanistan.

Still, doubts linger among internationaloutsideobservers as to whether the Tajik Air Force has the ability to carry out airstrikes without foreign assistance, which leaves the U.S. and Russia as potential instigators. According to Al Jazeera, a spokesman for U.S. forces in Afghanistan said the American military did not conduct any airstrikes in the province of Takhar when the clash occurred. Russia, which shares a border with Tajikistan and has offered the country security assistance in the past, denied involvement after local Afghan military representative reported the strike was conducted by what he described as a “MiG.”

With this in mind, Moscow is a prime suspect in the strike for two reasons. First, the proximity and recent movements of Russian forces in the area: According to Tajikistan news service Asia Plus, Tajik airspace is patrolled by Russian aircraft as part of the Joint CIS Air Defense System, mostly for search and rescue missions, transportation, and the occasional attack on militant groups.’ Indeed, the 201st Military Base in Tajikistan is one of Russia’s largest overseas outposts, and the 670th Air Group is present at the base with a detachment of Su-25 Frogfoot air-to-ground attack aircraft. If a Russian intervention occurred, they would be among the likeliest first responders.

Second, Russia has a vested interest in the integrity of its neighbor’s borders. Extremist groups have been active in Tajikistanfor decades, and several Tajiks have risen to the highest ranks of the core ISIS caliphate in Syria. Russia is also a major drug corridor through which approximately one-third of the world’s heroin supply transits every year, and Tajikistan is one major funnel to mother Russia. Tajikistan’s recent uptick in extremist violence — such as the special police commander who defected to ISIS in 2017 and the knife attack on four tourists earlier this month — captures the specter of chaos that belies the stable exterior of the authoritarian state, chaos which could potentially burst forth thanks to the instability to the south in Afghanistan.

That doesn’t mean the United States is sitting on its hands. Those threat factors prompted the United States to deploy Army Special Forces teams to Tajikistan to train up its security forces, plus a pile of rotational exercises with conventional U.S. Army forces as recently as April of this year.

As the security situation in Afghanistan continues to deteriorate, the possibility of border clashes occurring between neighboring states and non-state actors increases. Russia has a vested interest in preserving security of its southern flank, and former Soviet states are rightfully wary of homegrown extremism thanks to the perpetual dumpster fire that is Afghanistan. But despite this, the chances of border violence, such as this mysterious bombing, and intervention by Afghan neighbors can only increase as the United States looks for an exit — and that may see powers, such as Russia, that are geographically closer to the troubled Central Asian state into the fray.