Taliban commandos equipped with night-vision goggles and American-made M4 assault rifles carried out a string of devastating attacks in southern... 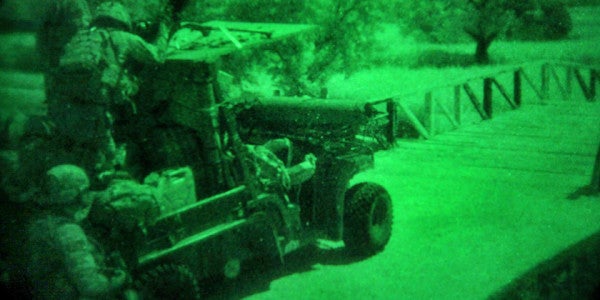 Taliban commandos equipped with night-vision goggles and American-made M4 assault rifles carried out a string of devastating attacks in southern and western Afghanistan over a 36-hour period on Nov. 13 and 14, killing scores of Afghan security personnel, The New York Times reports.

The commandos belong to an elite Taliban task force dubbed the “Red Unit,” which Afghan authorities say is better outfitted than most government units, including the ones they targeted this week. The enemy operators are also employing tactics rarely before seen used by insurgents in the country.

“They have their own mobile special forces unit which is equipped with lasers and night-vision gear, and they are attacking check posts and bases and then leaving the area as quickly as possible to avoid airstrikes,” Qudratullah Khushbakht, spokesman for the governor of Kandahar Province, told The New York Times. The article also notes that Red Unit commandos often ride into battle aboard Ford Ranger police pickup trucks or armored Humvees to confuse Afghan troops into thinking they are friendly forces.

The commandos’ gear and tactics raise the troubling prospect that the Taliban is receiving equipment and training from wealthy foreign powers — including Russia, with whom President Donald Trump is seeking to forge a strategic alliance.

Members of the Red Unit are known to sport what The New York Times described as “Star Wars-like headgear” affixed with night-vision goggles that are Russian-built. Their M4s are adorned with laser pointers and expensive telescopic sights believed to have been manufactured in either Iran or Pakistan. The only forces in the region that are issued comparable high-tech gear are the Afghan government’s most elite forces, and their equipment is all American-made.

Those facts cast serious doubt on the Taliban’s claim that the Red Unit’s equipment has been taken from the police bases they’ve seized.

The Red Unit launched a total of five rolling attacks on more than a dozen Afghan police posts in Kandahar and Farah Province this week. The Afghan police at those posts did not have night-vision capabilities, according to local officials, and were slaughtered in droves. Some put the number of Afghan security personnel killed in Kandahar alone at 70. Government officials said that three police officers and 15 Afghan National Army soldiers were killed in Farah.

“The Taliban are trying to capture the entire province, and they have modern weapons,” Dadullah Qani, a member of the Farah provincial council, told The New York Times.

American military officials told The New York Times that Russia and Iran are most likely supplying the Red Unit. The two countries have worked as close allies in Syria, where they’ve competed — and occasionally clashed — with American-backed forces as various armed factions scramble to lay claim to territory once held by ISIS. Iran’s influence has also significantly expanded in neighboring Iraq, where Iranian-backed militias recently accompanied Iraqi troops in an assault on Kurdish forces in the disputed city of Kirkuk.

Afghanistan, which borders Iran to the east, remains the U.S. military’s largest foothold in the region. In August, Trump heeded pleas from Pentagon officials to ramp up the campaign in Afghanistan, huge swaths of which have been seized by the Taliban since the American combat mission officially ended there in late 2014. An offshoot of ISIS has also established a stronghold in the country’s east. The official number of U.S. troops in Afghanistan is expected to increase to about 16,000 next year, while the unofficial number might already be higher than that.

Defense Secretary Jim Mattis recently joined a chorus of U.S. military officials, including Gen. John Nicholson, commander of U.S. Forces Afghanistan, in condemning Russia and Iran’s support to the Taliban. “Those two countries have suffered losses to terrorism, so I think it would be extremely unwise if they think they can somehow support terrorism in another country and not have it come back to haunt them,” Mattis told reporters in late September during a visit to Kabul.

Roughly 6,700 Afghan troops were killed in 2016, the highest level since the 2001 American invasion kicked off a grinding counterinsurgency that has also cost the lives of more than 2,300 U.S. service members. Now, amid the U.S. military’s second attempt to quell the insurgency with a troop surge, Iran and Russia appear to be doubling down. Mattis, whom Trump granted authority to adjust the rules of engagement, has vowed to push American forces closer to the front lines.

That could eventually put U.S. troops face-to-face with members of the Red Unit, which has increased in strength since it first surfaced last year. Military Times reported in August 2016 that the commando group had about 300 fighters in its ranks and was growing.

An Afghan police chief in Kandahar quoted in the Military Times article called the commandos “well equipped and highly armed,” adding, “We can’t deny that the Taliban are now changing their techniques and this new group is part of their new approach and new tactics.”

It is unclear how much the Red Unit has grown since then.