Editor's note: This is the first dispatch by T&P; correspondent Marty Skovlund Jr. who is reporting on the ground from... 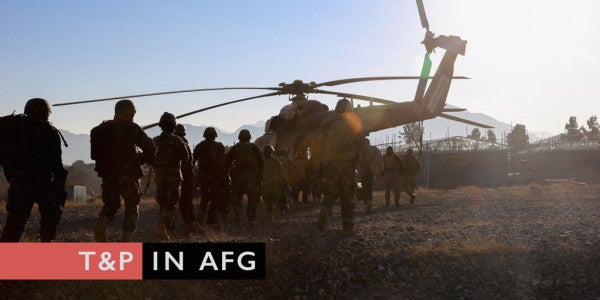 Editor's note: This is the first dispatch by T&P; correspondent Marty Skovlund Jr. who is reporting on the ground from Afghanistan.

I stared at the brutally rugged terrain below me as the plane made its final approach into Kabul. I couldn't help but think about the long nights I had spent climbing up and down those same steep ridges nearly a decade ago. Has this place changed at all, or is it as dangerous as the reports have made it out to be? Am I pushing my luck by coming again? I didn't have the answers to the internal nagging I was putting myself through, but I didn't come this far not to find out.

The plane lowered its landing gears as we dropped down over the city of Kabul. There was a building on fire on the outskirts of town, the black smoke curling into the air toward us. The demeanor of the other passengers on my flight changed dramatically; many of the women donned their headscarves, while the men seemed to put their game faces on, as if we were going straight into combat upon landing. That obviously wasn't the case, but the plane dropped violently to the tarmac reminding everyone that no chances would be taken on landing.

After a long wait outside the Kabul airport that tested my nerves, I was picked up in a taxi that would take me to the Operation Resolute Support Headquarters inside the green zone.

View from the sky over Afghanistan.Marty Skovlund Jr. photo

“He was a young boy,” said my taxi driver, a local Afghan who appeared to be in his early twenties himself. “On a motorcycle, so only Westerners are allowed past gate now.” He was referring to the adolescent suicide attacker who killed at least seven Afghans just outside the British and Canadian embassies days before my arrival, which didn't alleviate my anxiety as we darted in and out of traffic during Kabul rush hour. Not wearing body armor while driving in Afghanistan was a first for me; riding in a cab here made the experience seem surreal. My prior interactions rarely consisted of anything more than “shut up” and “hands up” when it came to locals in Afghanistan. Now I was making small talk and praying to God the cab wouldn't break down. I admittedly felt a little out of my element.

I finally made it to RSHQ, where I made my way through security and into the compound surrounded by the massive t-barriers protecting the American-led NATO presence in Kabul. Within the first few minutes, I counted uniforms from six different countries, and would later find out a total of 39 nations were represented inside the compound.

After dropping off my bags in the transient billets, I was taken on a tour of the compound by a Navy lieutenant and counted not one, not two, but three coffee shops on the compound, an open-air CrossFit-esque gym, and even a pizza parlor. I wasn't necessarily surprised that amenities like this were present— we’ve been in this country for sixteen years now after all— but rather how much nicer everything was than the last time I was in country. My first interviews with American military leadership weren't scheduled until the following day, so the lieutenant and I ordered a coffee and sat down to talk.

“This is where a lot of people hang out after work,” he told me. Indeed it was, and as an avid people-watcher, the mix of language and cultures present was fascinating. The mood seemed to be upbeat though. I don’t know exactly what I was expecting, but the positive demeanor of soldiers and contractors alike surprised me.

Either the people working inside the compound were blissfully unaware how much violence existed outside their protective walls — which I doubted — or they were feeling good about their mission. I wondered how it could be the latter given all the negative coverage coming out of the country in recent months: the increase in insurgent control and influence across the country over the last year, the uptick in U.S. forces killed by hostile fire (the 13th U.S. soldier this year was just killed in action today in Logar province), the barrage of suicide attacks in the country’s capital, and the uptick of Afghan security forces going AWOL.

Still, Air Force Brig. Gen. Lance Bunch, the director of future operations, tells me the Taliban “is consistently defeated on the field of battle.” Senior defense officials say this is in large part due to the successes of elite Afghan commandos who are conducting 70% of offensive operations, while only making up 7% of the force. They’re regularly erasing progress made by the Taliban, but that hasn’t necessarily eliminated the stalemate that Resolute Support commander Gen. John Nicholson described earlier this year. I thought the U.S. military was more prominently involved in the fight, but it’s actually Afghans who are planning and conducting their own missions now, which is a far cry from what my experience with them was in 2009. Everything is moving in a good direction, they promised during my first brief.

But there is no truth like the ground truth, and seeing what the guys on the ground and in the fight have to say is key. Are Afghan commandos really as good as they’re being touted? I know there is only one way to find out, and it doesn’t involve sitting in the relative safety of a RSHQ coffee shop.