Afghanistan’s Ambassador Says We’re Not In A Forever War. That’s True, Since We’re All Going To Die When The Sun Explodes.

Afghanistan's ambassador to the United States told Task & Purpose Pentagon reporter Jeff Schogol Wednesday that the war in his country... 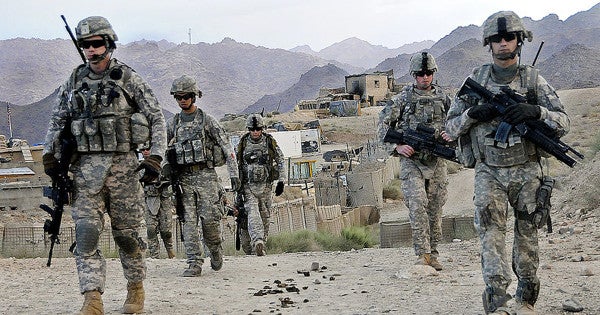 Afghanistan's ambassador to the United States told Task & Purpose Pentagon reporter Jeff Schogol Wednesday that the war in his country isn't a “forever war.” Which is absolutely true, if you consider that war will come to a quick end after the sun explodes and engulfs our entire planet in about 5 billion years.

Now normally, I'd reserve my criticism for people outside this wonderful media organization, but I'm a columnist with lots of opinions, and I'd like to cut through a bunch of bullshit that the ambassador said. And to be fair, Schogol is a great reporter just doing his job — providing context and quoting the ambassador accurately — and he dutifully leaves his opinions out of it.

That is not me, so here we go.

Frankly, I'm tired of being lied to about the situation in Afghanistan by people like Ambassador Hamdullah Mohib or American military generals. This war has gone on for 17 years and the Afghan security forces are guaranteed funding from NATO through at least 2020, so let's cut the shit.

“Those veterans who have served in Afghanistan should understand that the Afghan security forces — which they have helped us train — are one of the prides of our country now,” Mohib told Task & Purpose in a March 13 interview. “Three years ago, many people in areas such as Helmand and Nangarhar saw the security forces as mercenaries. Today, they are celebrated.”

I happen to be a veteran who served in Afghanistan, and this kind of drivel is an insult to my intelligence.

These “celebrated” Afghan security forces — which, again, have been receiving training from the U.S. and other NATO partners for over a decade — are widely illiterate, suffering casualty rates “often described as unsustainable,” and are still almost totally reliant on air support from the U.S., according to a Congressional Research Service report out earlier this month.

Meanwhile, the Special Inspector General for Afghanistan Reconstruction reported in January that the Pentagon was continuing to fund Afghan forces engaged in “gross violations of human rights” such as child sexual abuse, and the Afghan National Police is so inept and corrupt that citizens “mistrust and fear” its officers.

Yeah, everything is really looking to be on the up and up.

But according to Mohib, the Afghan government — which can be better described as the government of Kabul, since its sway over anything outside urban centers depends entirely on the whims of village elders — thinks it can gain control over 80% of the country by year's end, even though its influence has just fallen to the lowest level recorded in the two years SIGAR has been tracking it.

Look, I really want the government of Afghanistan to succeed, defeat the Taliban, and stand on its own and prosper. But the Afghan government is as crooked as a question mark and totally dependent on Uncle Sam to pay the bills.

I naively believed that President Donald Trump was the one man that could get us out of this mess, especially considering his criticism of the war in the past and his outsider mentality. But like President Barack Obama before him, he is expanding operations there again, sending more Americans into harm's way for a lost cause, and supporting a fledgling state that will never stop being fledgling.

At least, probably not for a few billion years.