There has been a lot of progress happening in Afghanistan over the 17 years the United States has been fighting... 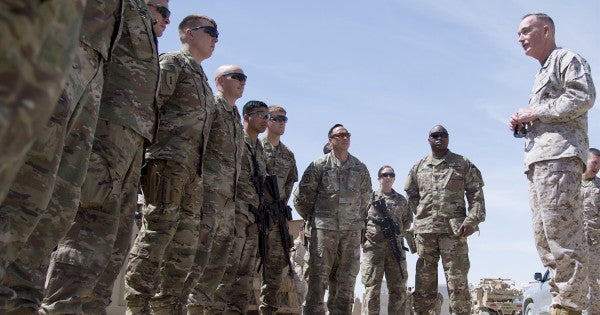 There has been a lot of progress happening in Afghanistan over the 17 years the United States has been fighting there — at least, according to the Pentagon’s top military minds.

Despite the Taliban briefly seizing the city of Ghazni earlier this month — thus sending a message to Afghans that their central government, just 100 miles away in Kabul, can’t protect them — and a one-year-old strategy that hasn’t changed much on the ground in terms of control of districts, the top American commander has joined the chorus of other senior leaders highlighting progress achieved thus far.

“So we are seeing progress in terms of the Afghan capabilities; this is not a purely U.S. or coalition fight,” said Gen. John Nicholson, commanding general of Operation Resolute Support and U.S. Forces-Afghanistan, in his final press briefing to reporters before he turns over the reins to Gen. Austin S. Miller on Sep. 2.

As Military.com put it, the outgoing commander was continuing the “tradition of hailing progress in Afghanistan,” and that tradition goes back very far in the nearly-17-year-long war.

Take, for instance, Army Gen. John Abizaid, then the commander of U.S. Central Command, back in February 2005: “Afghanistan is a place where military and economic, political and diplomatic activity at both the national level of the United States and also the international level came together in a way that, over the three years that we’ve been operating there, has shown interesting progress.”

According to the Pentagon’s article on his two-day visit to Bagram Air Base, Abizaid claimed that progress in Afghanistan was observable in “the establishment of an elected Afghan government, reconstruction projects that showed some tangible progress, the cessation of hostilities after 25 years worth of hostilities in the vast majority of the country, pretty effective counterinsurgency and counterterrorism activity by coalition forces, and a general belief, probably most importantly, by people of the country that things can get better.”

In March, Abizaid said he was “optimistic” about developments in Iraq and Afghanistan and elsewhere in the Middle East. “I think 2005 can be a decisive year,” he said.

The optimistic torch was then picked up by Army Gen. Dan McNeill, who served as commander of the International Security Assistance Force (ISAF) from 2007 to 2008. “I’d like to point out that there is significant progress in the forward move of the Afghan National Army,” he told a reporter from Reuters on Sep. 12, 2007, who asked whether recent gains would lead to less American involvement.

“We can win all the tactical battles but that doesn’t mean we win. To win, we have to win the battle of ideas,” he said. “We must define winning in Afghan terms: meaning improved security, reduced civilian casualties, trustworthy government, economic and social progress.”

He was fired a year later, apparently due to President Obama’s impatience with how the war was going.

Next up was Army Gen. Stanley McChrystal, who The New York Times wrote in February 2010 offered a “guarded but unexpectedly upbeat assessment” of the war he assumed command of the previous summer.

“I am not prepared to say that we have turned the corner,” McChrystal said. “So I’m saying that the situation is serious but I think we have made significant progress in setting the conditions in 2009, and beginning some progress, and that we’ll make real progress in 2010.”

Obama fired McChrystal soon after a Rolling Stone article was published in which he and his staff had criticized top administration officials. He was replaced by Army Gen. David Petraeus, who wrote to all members of the NATO Command in July 2010, “in the face of an enemy willing to carry out the most barbaric of attacks, progress has been achieved in some critical areas, and we are poised to realize more.”

Petraeus was also praised by politicians for his leadership in the war, as Military.com noted:

In 2011, Democratic Sen. Carl Levin, the chairman of the Senate Armed Services Committee, praised Gen. David Petraeus for being “instrumental in turning the tide in Afghanistan,” the Washington Post reported. Sen. John McCain, R-Ariz., added that Petraeus’s leadership is “turning around the war in Afghanistan.”

“I leave Afghanistan today with the belief that if we keep this momentum up we will deliver a decisive blow to the enemy and turn the corner on this conflict,” Defense Secretary Robert Gates said in June 2011, before leaving Kabul.

After Petraeus, there was Marine Gen. John Allen, who said in Feb. 2013, “I think we are on the road to winning,” before he turned over command to Marine Gen. Joseph Dunford, who offered a more sober assessment than his predecessors.

“At this point we have made significant progress, but we are not yet at the point where it is completely sustainable,” the current Chairman of the Joint Chiefs of Staff said in June 2013, although he reassured Americans that the smaller U.S. presence in Afghanistan after 2014 would mean “the actual fighting on a day-to-day basis will all be done by Afghans.”

Since the mission name was changed from Operation Enduring Freedom to Operation Freedom’s Sentinel, thus ending “combat operations in Afghanistan” on Dec. 31, 2014, there have been 52 service members killed and another 318 have been wounded, according to the Defense Casualty Analysis System.

“Together, we have lifted the Afghan people out of the darkness of despair and given them hope for the future,” Army Gen. John Campbell said in Dec. 2014. “We’re very proud of our relationship — a relationship built on trust, friendship, and shared interests. That trust and a common vision for a stable, secure, and unified Afghanistan fills me with confidence that we’ll continue to be successful. The road before us remains challenging, but we will triumph.”

Finally, there was Army Gen. John Nicholson. A few months after he took command in March 2016, he said, “I would say overall our mission in Afghanistan is on a positive trajectory. I can elaborate on that with you later, but thus far, in keeping with the campaign plan that I outlined, we have seen the Afghans successfully defend each of these areas, largely by taking offensive operations against the enemy, and the Taliban has not yet been able to realize any of their territorial ambitions this year.”

Next month, Army Gen. Austin Miller assumes command of the war. He’ll be the ninth American in charge of that effort, out of 18 total commanders in Afghanistan since 2002.