The US has mostly withdrawn from Afghanistan, and we still have no plan to save interpreters left behind 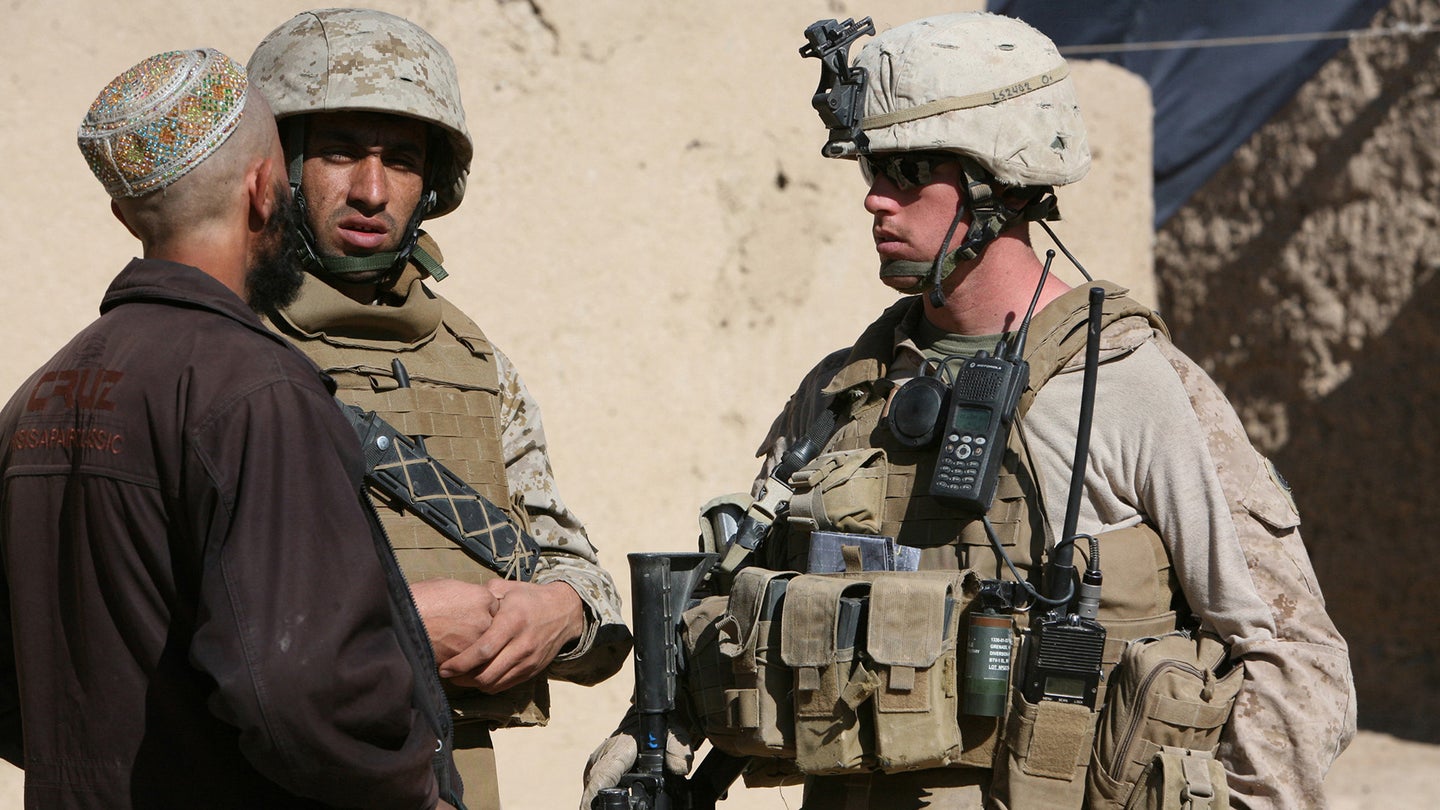 With the help of an interpreter Marine Cpl. Devon Sanderfield speaks with a villager in the town of Changwalok, Afghanistan, Dec. 6, 2009. (U.S. Marine Corps photo by Cpl. Zachary Nola.)
SHARE

President Joe Biden has vowed to rescue Afghan interpreters and their families before the Taliban kills them, but that promise has rung hollow so far because no evacuation plan has been finalized and most U.S. troops have already left the country.

An estimated 70,000 Afghans who have worked for the United States — and their family members — are at risk of being killed as the Taliban push for a final victory. Video has emerged showing the Taliban murdering 22 captured Afghan commandos in cold blood, a sign of the violence that is likely to follow the fall of the Afghan government.

Biden recently told reporters the U.S. government has accelerated the application process for Afghans who are trying to get Special Immigrant Visas. He also pledged that Afghan interpreters and their families would be moved outside of Afghanistan, but his administration is legally prohibited from bringing them directly to the United States while their visa applications are still being evaluated.

“Starting this month, we’re going to begin relocation flights for Afghanistan SIV applicants and their families who choose to leave,” Biden said at a July 8 White House news conference.

A senior administration official said the U.S. government has identified U.S. facilities outside of the continental United States and other countries that could potentially host those Afghans before the U.S. military’s withdrawal from Afghanistan is completed 49 days from now

But the Biden administration has still not officially announced where the Afghans could go and U.S. Central Command announced on Tuesday that the withdrawal from Afghanistan was 95% complete.

Citing security concerns, a State Department spokesperson declined to say where the U.S. government is considering moving the Afghans.

“Right now, the numbers aren’t at such a level that we think it’s going to be difficult to move them to a third location,” Kirby told reporters on Tuesday.

However, a major hurdle will be reaching interpreters who live outside of Kabul, said former Army Maj. Matt Zeller, who has long advocated for rescuing Afghans who have worked for the U.S. government.

By one estimate, 52% of the Afghans who need to be evacuated live outside of Kabul and most Afghans can no longer travel within the country, Zeller said. Moreover, the U.S. military just left its biggest base at Bagram Airfield.

When asked if U.S. military aircraft might be used to evacuate Afghan interpreters and their families who live in parts of the country that are contested by the Taliban, Kirby deferred to State Department officials.

“We know we have an obligation to assist these brave men and women, and their families,” Kirby said.  “That is why we are working hard to support State Department-led efforts to arrange for their transport out of the country, in keeping with their desires. The most immediate effort for us is helping identify suitable locations overseas for these people to complete the SIV process.”

The struggle to save as many American allies before a looming defeat is not unique to Afghanistan. In 1975, the U.S. military helped move more than 100,000 refugees from Vietnam and Cambodia to Guam as part of Operations Baby Lift and New Life. Most of those refugees were resettled in the continental United States.

But U.S. troops have faced bureaucratic nightmares for the past 20 years as they have tried to get both Iraqi and Afghan interpreters to safety. Those who have made it to the United States have been the exception rather than the rule.

For Naveed Mustafa, who said he attended Ranger School and the Defense Language Institute English Language Center in the United States and then served as an interpreter with Special Forces, the issue of evacuation is life and death.

Mustafa said he did not work for the U.S. military long enough to qualify for a visa. He has letters of recommendation but has been unable to secure help from defense officials or groups that advocate for Afghan interpreters.

Every day, the Taliban get closer, he said. They claim that anyone who has worked for the U.S. government is a spy.

“If they take the power there is no place for us in Afghanistan,” Mustafa said. “We request the Americans: We were the people to enable your missions and fought very hard shoulder to shoulder with you guys against the common enemy – don’t [leave] us behind.”