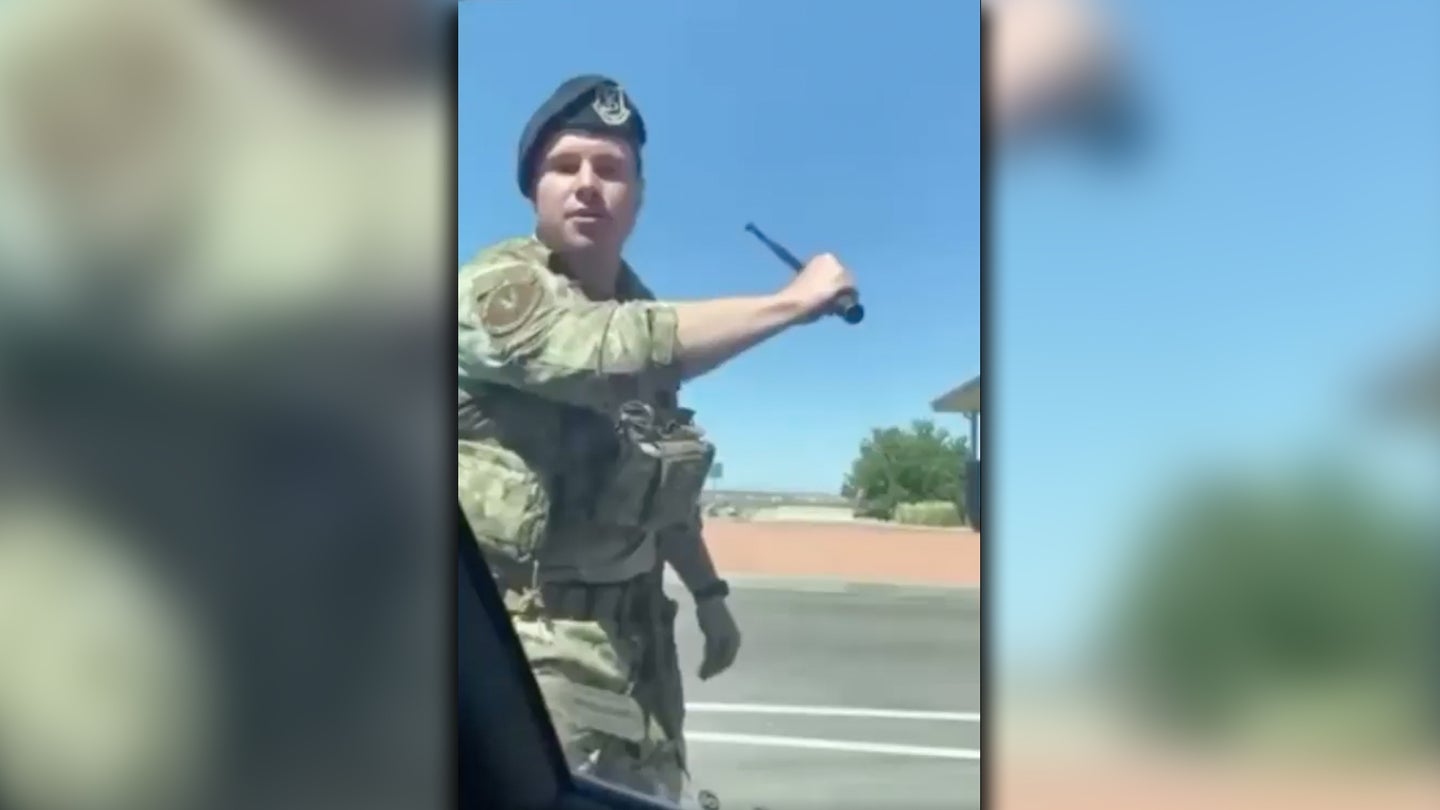 The Air Force is standing behind a security forces airman who smashed the car window of a woman who was trying to enter Mountain Home Air Force Base, Idaho late last month.

Master Sgt. Eric Harris, a spokesman for the base, said the Air Force is not investigating because the airman involved, Tech Sgt. Ryan Green, of the 366th Security Forces Squadron, was acting within high-risk traffic stop procedures after the driver, Tatiyana Gonzalez, was stopped at the base gate for having invalid credentials. She then nearly ran over Green while attempting to flee the gate in its outbound lane, but she was stopped by a barrier that blocked the lane.

The video shot on June 26 shows Green then smashing in the car window before urging the woman holding the camera to “step out of the vehicle now.”

“I’m pregnant. Don’t f–king touch me,” Gonzalez said over what sounds like an infant crying elsewhere in the vehicle. Green tells the woman she has just committed a felony, to which the woman responds: “For what? You’re not the police.”

“Yes, we are law enforcement,” Green says, before reaching in through the window to unlock the door.

Throughout the rest of the video, Green and a second airman work to remove the woman from the car and detain her while she repeatedly asks why she is being detained. “You said it was a civil matter,” Gonzalez said.

“No ma’am, it turned into a criminal matter when I told you you were being written a citation for your car—”

“You didn’t [unintelligible] being written a citation. It’s a civil- … ”

Gonzalez is a former spouse of an active-duty Air Force member on the base, Harris said. She was attempting to enter the base to retrieve some belongings from on-base housing, but her dependent identification, driver’s license and registration were all invalid.

At that point, Green tried to get in touch with his first sergeant to talk about the situation. Meanwhile, Gonzalez was given a citation for her invalid identification, but by that point she had become “verbally combative,” Harris said.

According to Harris, Gonzalez then attempted to drive away through the gate’s outbound lane. Green tried to stop her, but she drove right at him. Green stepped out of the way while the on-duty gate guard deployed a road barrier to close the lane. Green then “initiated a high-risk traffic stop” due to the perceived risk Gonzalez posed to Green, Harris said.

That’s the point where the video starts, with Green trying to get Gonzalez out of the car and Gonzalez refusing to do so. Then Green smashes in the window, unlocks the door from inside and pulls her out, which is in accordance with high-risk traffic stop procedure, Harris said.

The Air Force is not investigating the incident, the spokesman explained. But the base did conduct an internal use of force review which concluded that Green acted within standard procedures. Meanwhile, Gonzalez was detained and charged with violating registration provisions; eluding a peace officer; and endangering a child since her two young children were present when she attempted to flee from security forces, Harris said.

Gonzalez was turned over to the Elmore County Sheriff’s Office, detained, and released on June 28, Harris said. She is still required to go to court to resolve those charges, he explained.

The video soon became a lightning rod on Facebook,  Reddit and Instagram, where many commenters accused the woman who shot the video of being a “Karen,” which, according to the BBC, “is associated with the kind of person who demands to ‘speak to the manager’ in order to belittle service industry workers.”

“Karen vs the military is a new one for me lmao,” wrote one Reddit user.

“Security Forces may be good for giving ridiculous moving violation tickets … However, I’ve never heard of any Security forces member using excessive force or improperly escalating an issue,” said another. “If you had your window broken and were pulled out of your car, you probably fuvked up [sic].”

Others sided with Gonzalez. One Facebook user who posted the video on June 28 identified herself as Gonzalez’s aunt, Delilah Chacon. Security forces airmen broke her window, forced her out of her car and arrested her “all while her two year and 8 month old were screaming in the backseat,” Chacon wrote.

Chacon shared a statement from Gonzalez saying that Green, “had me arrested on bogus charges that did not stick. Elmore County Jail illegally incarcerated me the entire weekend and I was let go today with no charges or fines and should never have been booked and picked up by police. This man has lies [sic] multiple times about why he did this to me.”

Chacon did not immediately respond to a request for comment from Task & Purpose.

The incident comes after several high-profile Air Force security forces incidents this year. In February, an unauthorized civilian wearing a mouse hat entered Joint Base Andrews, Maryland, went to the base exchange food court, the passenger terminal for the 89th Airlift Wing, the flight line, and even into a C-40, the business jet used to fly combatant commanders and members of the Cabinet and Congress. An Air Force investigation found that a distracted guard, a malfunctioning gate, and complacent airmen allowed the brightly-dressed, mouse hat-wearing civilian to make it so far into the base.

Just a few weeks earlier, a British man breached the gate at Royal Air Force Base Mildenhall, England. That doesn’t seem to have been a problem at Mountain Home Air Force Base though, unfortunately for Gonzalez.

“Bro been waiting his whole contract to do some shit like that lol,” one person reacting to the video wrote on Instagram. Hundreds of people liked the comment.

Gonzalez did get back some of her possessions eventually though.

“Since the incident, Ms. Gonzales has had several possessions returned to her,” Harris said. “Mountain Home Air Force base supports our Air Force members and dependents in accordance with Air Force policy.”