Why We Marched: Remembering The Raider 7

I linked up with the small team of Raiders just outside the village along a quiet two-lane highway at 0230.... 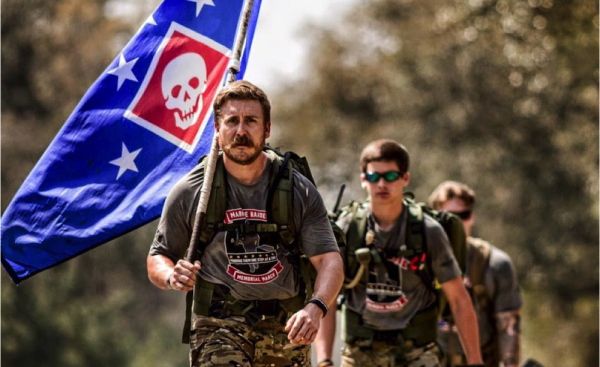 I linked up with the small team of Raiders just outside the village along a quiet two-lane highway at 0230. Blending in with the nearby tree line, they were methodical in making their final preparations. Barely a word was spoken as they checked their gear and spread loaded their supplies among one another. There was a mix of eagerness and confidence in the group; they understood the mission and had prepared extensively for weeks leading up to this moment. Off in the distance, we could see the lights of the adjacent unit approaching and with a simple nod we started to ruck up. After pleasantries were exchanged and instructions were passed, our team set out on the long foot movement that lay ahead of us. With their packs heavy and their hearts full, the Raiders were ready to honor their brothers.

Although reminiscent of our deployments overseas, this mission was not taking place in Afghanistan, but just outside of Savannah in rural Georgia. The Marine Raiders of Marine Corps Forces Special Operations Command were marching 770 miles from Navarre, Florida, to Camp Lejeune, North Carolina, in order to honor their seven fallen brothers. The Raider 7, as they have become to be known, and four Louisiana Army National Guardsmen were killed on March 10, 2015, when their UH-60 Black Hawk helicopter crashed during a training mission off the coast of Florida.

The 10-day, round-the-clock memorial march was roughly halfway complete when I joined one of the seven teams for their early morning, 12-mile leg. Having served in a different battalion, the hike served as a chance for me to learn about the lives of the Raider 7 directly from those who had worked with them. The lead organizer, Staff Sgt. Nate Harris, explained why they decided to make the journey.

A line of ruckers go past cheering fans as they finish out their 770-mile journey from Navarre, Florida, back to Camp Lejeune, North Carolina.DoD photo by Katie Lange

“By marching from the crash site in Navarre, FL back to our base in Camp Lejeune, NC it signifies bringing our brothers home on the journey they were unable to make while honoring their memory in the process,” Harris told me via email.

As we made our way down that dark highway, the level of support shown by the local community blew me away. In addition to the continuous police escort, the Marines were also followed by a support RV driven by a Vietnam veteran. Along the route, trucks honked their horns and cars slowed down to shout encouragement.

In addition to the 40 pounds in each of their rucks, the Raiders carried a large blue Raider flag and a paddle. The paddle was the only item that was not destroyed in the tragic crash on March 10, 2015. The Raiders affixed the unit’s patches on one side, and dog tags on the reverse side. They carried the paddle the entire way from the crash site and presented it to Lt. Col. Craig Wolfenbarger, commander of the 2nd Marine Raider Battalion, home of the fallen Marines.

Without exception, the focus during the entire event lay with their fallen brothers. Overcoming blistered feet and sleep deprivation, they maintained their humble professionalism in each news interview and took every opportunity to remember the legacy of the fallen. As part of their social media campaign to raise awareness and donations, the Raiders have shared their reasons for participating in such a grueling event.

One participant explained his biggest motivation: “Liam's [Staff Sergeant Flynn] daughter, Leilani, is my biggest motivation. As she grows up, I'm confident she will know what an amazing man and warrior her daddy was, but I want her to also understand how important he was to me and so many other people. And finally, as Liam watches from above, I want him to see how his family will always be loved and looked after by his brothers and their families who remain here on earth. The family aspect of the Raider community is one thing that sets us apart from so many others and prevails during this time where we honor our brothers and friends.”

Less than ten days after they started, all of the teams assembled in Sneads Ferry, North Carolina to hike the last four miles together. Battered, but far from broken, their ranks swell as they make their way toward base. Once aboard Camp Lejeune, Stone Bay, they are greeted by other Raiders and the countless supporters who gathered for the momentous occasion.

Finally able to pass their paddle on to Wolfenbarger, the Raiders had only one last thing to do. In typical fashion, they honored their fallen brothers with a fitting tribute: “25 and 5.” With the crowd intently watching, they completed the first set of 25 push-ups and on cue, they shouted “Raider” on the 26th, 27th, 28th, and 29th push-up. On the very last push-up, they shouted “Raider 7” as a simple but deeply meaningful way to show their utmost respect and admiration.

To learn more about how you can support the families of the Raider 7, visit the website.