Watch This Marine Vet Celebrate Her 100th Birthday Like A Boss

Wearing a saucer hat covered in flowers and a blue sash, Gladys Ruth Gallivan celebrated her 100th birthday with family,... 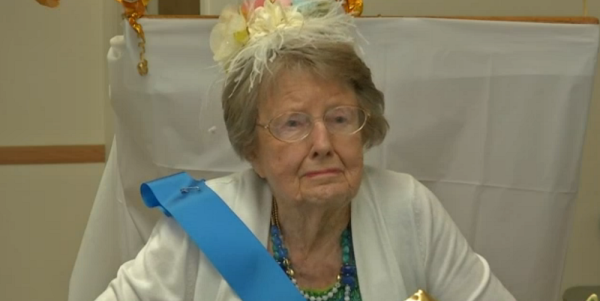 Wearing a saucer hat covered in flowers and a blue sash, Gladys Ruth Gallivan celebrated her 100th birthday with family, friends, and fellow veterans. On April 16, the Women Marines Association held a tea party for Gallivan, who was one of the first female Marines to serve in World War II, at the Veterans Village of San Diego, reports NBC San Diego.

Gallivan enlisted in the Marines in 1943 during the “free a man to fight” recruitment campaign. It was a way for Gallivan to advance her career, but she admits, she also wanted a change of pace.

“I was just tired of my job,” Gallivan told NBC San Diego. “Other than that it was just my idea.”

Gallivan joined when she was 26 and served at Marine Corps Air Station Cherry Point, and later Miramar, in North Carolina. At the time, the openings for women were limited to jobs in motor transportation, maintenance, and administrative or clerical positions.

“We couldn’t go overseas,” explained Gallivan, who was honorably discharged in 1946. “Wherever they could put us, they put us. Going into the Marine Corps today is entirely different.”

To help Gallivan celebrate this milestone, the Women Marines Association created a Facebook event asking fellow Marines to send her birthday cards, with some coming from as far as Japan.

“I cannot believe it,” she told NBC San Diego. “It's amazing to think someone would do this just for me.”

This wasn’t the first 100th birthday celebration for the centenarian, nor is it likely to be the last. Gallivan’s birthday is actually on April 1, but if people want to keep throwing her parties, she’s not inclined to stop them.