4 Reasons Why I Will Miss The Navy

“I really do wonder all the things we don’t hear about the military, if these are the terrible stories we... 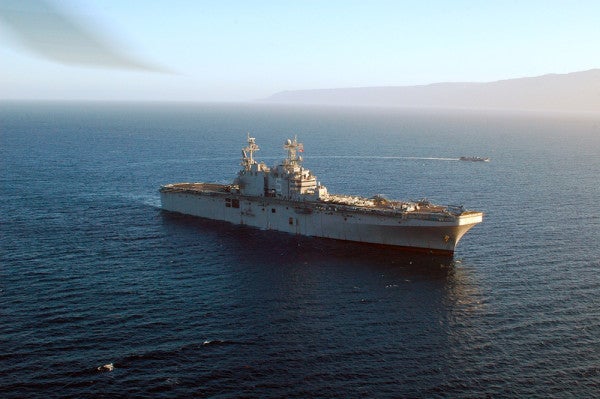 “I really do wonder all the things we don’t hear about the military, if these are the terrible stories we do hear,” my friend said, as she took a sip of her drink. I was catching up with her at a bar in New York in June, telling her about being harassed by one of my superiors. I had recently submitted my letter resigning my commission with an “Are we there yet?” frustration over many months still to go until my separation date. Yet, I still came rushing to my beloved military’s defense.

“On the contrary, I love the Navy. I think the general public doesn’t get to hear about the best parts of serving. I wish we were better at that,” I said.

It’s true. Despite having grievances with some of the Navy’s talent management shortfalls, I would not have spent the last six years any other way, and I’ll continue to drill in the reserves.

However, in the months since I resigned my active-duty commission, my personal decisions for leaving have only been reinforced, leaving me feeling confident that I’ve made the right decision at the right time.

In that time, I have also had the opportunity to observe what parts of my military experience I would like to take with me as I move on to the next chapter of my life, and what irreplaceable aspects I will sadly leave behind. The stories that I tell my friends at home the most are these positive ones that the public does not hear enough about.

1. I learned exactly how much I can endure.

A master gunnery sergeant at Officer Candidate School once told me that the commissioning program truly tested “intestinal fortitude.” As it turned out, as long as I didn’t do anything egregious that went against the Navy’s core values — like lie, cheat, or steal — all I had to do was not quit. I learned that my physical and mental endurance far exceeded my previous expectations, and that I could still likely endure much more before reaching a breaking point.

About a month into OCS, I injured myself and had to sit in a holding company for two months. During this holding period, I thought about quitting every day. I doubted myself constantly, and wondered if I would even get to commission. We had to participate in all of the silly evolutions of military indoctrination without a single day counting toward graduation and commissioning.

I watched my original class graduate. During this first trial I met some of my closest friends in the military. Many of us would recycle to classes still injured, telling medical that we were feeling better when we were still in pain every day. Some friends in “H Class” who might have otherwise been great officers were physically disqualified from their dream of serving in the military while others simply gave up. For those who didn’t quit, graduation day was that much more meaningful because we had been close to people who didn’t make it.

These tests of endurance only persist and evolve. In the military, you constantly find yourself in situations where the duration of a difficult event — deployments, long-distance relationships, horrible bosses — seem infinite. You think, “How the hell am I going to get through this? I am not going to make it three more months.”

But you always do. As a friend wrote me, “Bad days give you context, give life pleasure . . . they give you a strength, a sense of self-assurance; I can can get through anything because in the past I survived this … It’s almost as if the brain needs the physical proof.”

2. The Navy is more Spaceballs than Star Wars, but the coolest parts beat anything I’ve seen in a movie.

A recruiter will never tell you that most deployments are 90% boring and awful, but the 10% that isn’t is so incredible it will make up for the rest. One of my OCS instructors noted that comedies are the most accurate movies depicting Navy life, and it proved true.

The boredom meant we had to get creative to keep ourselves entertained.

I am sure one of the subconscious reasons I joined the Navy over another branch was that it seemed the most like Star Wars. As I walked toward my first ship for the first time, I stood in awe of its sheer mass, its hull number brightly lit on the superstructure.

On a tour of my new work space, I walked into a restricted area to find sailors watching a pornographic scene from the television show, Spartacus, and dressing a blow-up sex doll in various outfits. It was a comical introduction to incredible professionals.

On another deployment, a handful of junior officers who worked nights banded together to troll the ship. At 2 am when we realized that as very junior officers we were the most senior people awake, the pranks began. The rest of the ship woke up to googly eyes stuck on half the spaces, pictures in the officers’ mess that had been replaced with more comical ones, and senior officers plastic wrapped into their staterooms.

It can be very silly sometimes, hence the Spaceballs analogy, but all the antics stop when the action starts.

I’ve served on four ships with diverse missions in operations centers that truly do look like they arrived off a set of Star Wars. I’ve flown in five different kinds of military aircraft, various small boats, and have a Humvee license. I have shot a lot of weapons.

I’ve had days when something happened in an undisclosed location that I’ll never be able to tell my parents about.

The incredible thing is that for someone in the Navy or Marine Corps, none of these experiences are particularly unique. On those days, at sunrise and sunset, you swell with pride knowing that you are serving your country, and that your service matters.

3. I visited parts of the world that most Americans never see.

I reported to my first ship while it was on its way back from deployment. Four months later, I was in Japan to support the humanitarian relief after the 2011 earthquake and tsunami. In all, I’ve been to 14 countries in six years on Navy orders — and that doesn’t include U.S. territories.

There were vacation-like port calls such as Dubai, Thailand, and Spain, yet I may have never gone to these places on my own. One of the appeals of joining the Navy was the opportunity to visit more challenging, less tourist-friendly locales. I was not disappointed in the chance to spend time in Timor-Leste and Djibouti, even if the best part of the latter was the “Djiboutilicious” t-shirt I purchased from the Navy exchange on Camp Lemonnier.

Some of my best memories in the Navy have been visiting these far-off places, with the friends who shared that pocket of time with me.

I have had incredible leaders at key points in my military career; mentors who got nothing in return for advising me besides pride; sailors who were patient with my disparity in knowledge and experience; and loyal friends who helped me through the perfect storm of relationship struggles and operational commitments.

I am thankful for the leaders who allowed me to take on more responsibility than I thought I was ready for, celebrated my successes with me, and let my failures be teachable moments so that I would not be afraid to think critically and take risks.

Mentorship is the professional means of “paying it forward.” A mentor gets nothing in return besides seeing his or her mentee excel, with the hope that eventually the protege will make the organization better, and eventually also train others. It’s important to always remember that you can never be too busy to make time for helping promising, hard-working people who are at an earlier part of their careers.

I understand that I know nothing about the art of patience because sailors with three times as many years in the Navy had to still say, “Yes, ‘ma’am.” I hope they know how much I valued their experience and insight, and I can only hope that I made the best decision when we were presented with two bad options.

I have found my “girl groups” at different points of my time in the Navy who were there when I’d had my heart broken; when I needed to learn about the engineering spaces; when I needed someone to empathize with over passive-aggressive sexism; to go out dancing in downtown San Diego, Phuket, or Bahrain; or even someone I could comfortably ask to be an observer when I was tagged for urinalysis.

The fraternal ties of military service are not limited to my own country. Some of my closest friends serve in the navies of coalition partners. We learned that the farther we were from our home countries, the smaller were our national divisions. We were all bound by the unshakeable call to service.

The camaraderie of the military is frequently cited as the best part of serving. You learn to laugh in the worst of times because, as an Australian officer I served with said, “If you didn’t laugh, you’d cry.”

We would die for our friends. This is the hardest part to leave. I can’t shake the feeling that I am turning my back on my sailors and friends, but I know that we will all continue to serve long after we are out of uniform.

Farewell, Navy, I’ll always have your back.