Navy Officially Blames Captain For Running His Missile Cruiser Aground

A Navy investigation has concluded that the former commanding officer of the USS Antietam was “ultimately responsible” for a series... 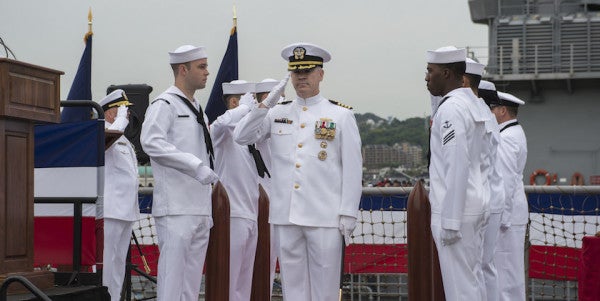 A Navy investigation has concluded that the former commanding officer of the USS Antietam was “ultimately responsible” for a series of blunders in which the 567-foot cruiser ran aground and spilled 1,100 gallons of hydraulic fluid into Tokyo Bay in January, according to Stars and Stripes.

Capt. Joseph Carrigan’s “judgement and decision making, including his actions that distracted or rushed the bridge team,” were primarily to blame, according to the investigation report, which Stars and Stripes obtained through a Freedom of Information Act request.

The USS Antietam is a Ticonderoga-class guided missile cruiser, equipped to intercept ballistic missiles, that’s been forward deployed to Yokosuka, Japan, since 2012.

Carrigan was relieved of his command on March 1, about a month after the Antietam ran aground on shoals near Yokosuka Naval Base. The events leading up to the grounding were detailed in the report, beginning with a delayed ship departure caused by system errors and a garbage-strewn pier.

The situation quickly unraveled from there.

“The CO was angry,” the ship’s acting combat systems officer, whose name was redacted, was quoted saying in the report. “I didn’t know why, and [Carrigan] told me to get to the bridge and ‘fix it.’ There was a fog on the bridge, a sort of zero-defect mentality that conveyed don’t say anything or the CO would get upset.”

The report noted incorrect navigational planning and execution amid heavy winds gusting up to 35 mph, as well as a series of mishaps that resulted in the ship dragging her anchor, including a substandard anchor briefing.

According to one officer’s testimony, Carrigan ordered the radio volume lowered, rendering communications between the bridge and the combat information center “almost non-existent.” The report also concluded that, by removing himself and key watchstanders from the bridge while the crew struggled with the anchor, Carrigan further fueled the chaos.

But the investigation didn’t place all of the blame on Carrigan. The ship’s navigator, a lieutenant junior grade, had only handled a cruiser in simulations and was not a qualified officer of the deck. Additionally, the report found that Carrigan did not receive adequate maneuvering recommendations from crew members.

The ship’s engines were stopped as the anchor was being recovered. Carrigan ordered the engines to be started again only after the anchor was in sight, to avoid causing damage to the ship’s sonar dome, according to the report.

Ninety seconds later, the Antietam ran aground, resulting in the damage to the ship’s propellers and the loss of 1,100 gallons of hydraulic fuel.

Carrigan earned his naval commission after graduating from the University of Notre Dame in 1993. Prior to taking over Antietam, he served as executive officer aboard the destroyer USS Nitze and commanded the destroyer USS Russell, according to Stars and Stripes.

U.S. Pacific fleet announced it had a “loss of confidence in Carrigan’s ability to command” and was replacing him as C.O. of Antietam in a statement released March 1.

“With ultimate responsibility for the safety and well-being of the ship and the lives of Sailors, commanding officers are held to the highest standards of accountability and must have the full confidence of Navy leaders,” the statement added.