As Defense Secretary James Mattis vacationed and President Trump took to his personal Twitter account this morning to announce a... 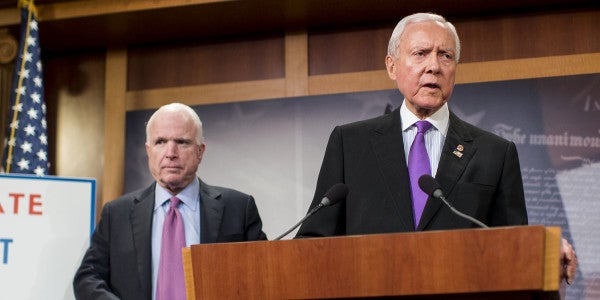 As Defense Secretary James Mattis vacationed and President Trump took to his personal Twitter account this morning to announce a blanket ban on transgender people in the military, transgender veterans were understandably confused and freaked out. “We have so many people who have come out to their units, and they’re scared,” Laila Ireland, a transgender Army vet and activist told Task and Purpose.

But even Trump loyalists in Congress and and active-duty military leaders were taken aback by the president’s announcement.

Leadership at Fort Bragg, the home of airborne and special operations and the largest military installation in the world, confirmed that they had no idea what was happening. “At this time we have not received any change in policy guidance with respect to transgenders ,” base representatives said in a statement.

Official statement from @FortBraggNC regarding string of tweets from President Trump. Right now, no change in policy guidance. #abc11 pic.twitter.com/6K0D9ue2SP

Several Republicans in Congress wasted no time in distancing themselves from Trump’s tweets and calling for more compassion for currently serving transgender troops.

“I don’t think we should be discriminating against anyone,” Republican Sen. Orrin Hatch of Utah said in a statement blasting “the policy the President tweeted today.”

“Transgender people are people, and deserve the best we can do for them,” Hatch added.

Republican Sen. Richard Shelby of Alabama echoed those sentiments in a comment to CNN’s John Berman. “He said (roughly) ‘I think everybody should be able to serve,” Berman tweeted this morning.

Republican Sen. John McCain of Arizona, a Navy veteran and former Vietnam POW, said in a statement that Trump’s morning tweetstorm was “yet another example of why major policy announcements should not be made via Twitter.”

Any American who meets current medical & readiness standards should be allowed to continue serving – my full stmt: https://t.co/6rHm5OWQzc

McCain added that the ban, as Trump explained it, makes no sense. “The Department of Defense has already decided to allow currently-serving transgender individuals to stay in the military, and many are serving honorably today,” he said. “Any American who meets current medical and readiness standards should be allowed to continue serving. There is no reason to force service members who are able to fight, train, and deploy to leave the military—regardless of their gender identity.”

Trump’s ban, which he announced on his personal Twitter account, was all the more surprising to lawmakers and Pentagon staffers because it undercut an ongoing policy review by Defense Secretary James Mattis. On July 1, Mattis gave his service chiefs six more months to study how new transgender enlistees could be integrated into each of the services.

That review was supposed to conclude Dec. 1. But Trump’s tweets preempted it.

Meanwhile, an estimated 2,000 to 10,000 transgender people currently in the military have been able to serve openly since last year, under a directive by then-defense secretary Ash Carter. What happens to them now is unclear.

In a statement to Task & Purpose, Pentagon spokesman Jeff Davis referred “all questions about the President’s statements to the White House,” but added that the department “will continue to work closely with the White House to address the new guidance provided by the Commander-in-Chief on transgender individuals serving the military.

“We will provide revised guidance to the Department in the near future,” Davis said.