Life in the military is miserable if we don't get past the prejudices our previous lives ingrained in us. 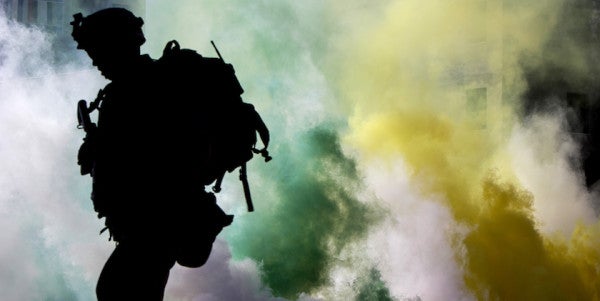 I had been out of the Army for about a month when a guy I’d served with texted me to say that one of the soldiers in my old squad had gone missing. The circumstances were strange. The soldier, whom I’ll call Barnes, had vanished after being taken to the military police station on Fort Campbell in Kentucky. Rumor was he got caught taking discrete cell phone photos of men pissing in the urinals at a local bar. Now he was facing criminal charges. The guy who contacted me suspected Barnes had gone AWOL, to avoid the humiliation.

I believed the rumors. Barnes had been “my soldier” — a subordinate. He was assigned to my squad fresh out of combat medic school within weeks of our unit returning home from Afghanistan. He was quiet with thick acne and a twang honed in a small town somewhere in the South. Sometimes he’d show up to work in a dark mood and would refuse to talk about whatever was bothering him. I’d yell at him for it. Or make him do pushups until he was about to puke. There are no secrets in the infantry. Still, Barnes possessed the qualities that war had taught me make a young medic good: discipline, respect, empathy, eagerness to learn. He was also exceptionally athletic. There was only one guy in the platoon who could beat him in a two-mile run. He wanted to deploy to Afghanistan, so I did everything I could to make sure he went.

I followed from afar as the AWOL theory quickly morphed into speculation that Barnes had been murdered. Neither hypothesis turned about to be true. The mystery was revealed to a squad of cavalry scouts during a morning jog through some woods on Fort Campbell. This was a Monday. Barnes disappeared on Friday. He was hanging from a tree branch by a noose. It had rained all weekend and his body was water-logged. Skin was coming off. I didn’t know Barnes that well, but the details crushed me. I thought: If only he had known that all of us knew he was gay, and that not one of us gave a single fuck. The Army is full of misfits, like Barnes. Like me. Like some of the best soldiers I’ve known. Life in the military would be miserable if we didn’t learn how to get past, or at least put on hold, the prejudices our previous lives ingrained in us.

The story of Barnes’ suicide has been playing on repeat in my head since I looked at my phone this morning and saw that President Donald Trump had just announced a blanket ban on transgender people in the military via Twitter. I know what you’re thinking: Barnes was gay; not transgender. But policies that ostracize people based on their identity always have the same impact: They force people to sequester their true selves. I joined the Army years before the repeal of Don’t Ask, Don’t Tell. There were plenty of homosexuals serving then, just as there are now. The only difference is that today they don’t have to hide who they are. For the rest of us, nothing changed. The Earth remains firmly on its axis.

Meanwhile, there are as many as 15,000 transgender people currently in the military. Last year, then-Secretary of Defense Ash Carter told them they could serve openly. Now, with a few taps of his finger, President Trump has delivered an eviction notice to them all. How is the military going to ensure every one of them goes? It won’t. It’s logistically unfeasible. And then there’s the obvious question of how do we deal with service members who begin questioning their gender identity only after they’ve joined the military. A blanket ban — “the United States Government will not accept or allow Transgender individuals to serve in any capacity in the U.S. Military,” Trump wrote — suggests that a service member would risk being discharged from the military if they sought psychological help for gender dysphoria. The alternative is to wrestle with it alone. Or ignore it out of necessity. The military isn’t just an opportunity to serve your country. It’s a paycheck. It’s stability. For some, it’s a way out of a terrible situation back home.

A cursory glance at the world around us shows that self-repression, whether conscious or unconscious, can lead to self-destructive and otherwise harmful behavior. Look at the Catholic Church. Look at Aaron Hernandez. Look at the 23-year-old 101st Airborne paratrooper who killed himself a few weeks after returning home from Afghanistan because he got drunk with his war buddies and his true self came roaring out. President Trump has vowed repeatedly to improve mental health care for veterans, but that promise clearly doesn’t apply to all. There are people now serving under a commander-in-chief who thinks of them as leeches on a system that they work their asses off to ensure is running properly every day they put on the uniform.

Soldiers are just as complicated as everyone else, but they are unique in the fact that they chose to serve. There are plenty of flag-waving patriots in this country who will thank you for your service until they’re blue in the face but not in a million years would ever encourage their sons or daughters to serve. Some of those people, including Trump, are afraid that allowing transgender people in the military will cost them tax dollars. However, some simple math should alleviate those fears. Subtract $5.6 million from $84 million. The answer is roughly how much more money the military would spend annually on erectile dysfunction drugs like Viagra than on transition surgery for transgender troops, according to a combination of recent analysis.

Others may share Trump’s belief that transgender service members would make the military a less lethal fighting force — or, as the president wrote, impair the military’s ability to remain “focused on decisive and overwhelming victory.” To them I say: I get it. I’ve served. I know there are certain subcultures within the military, particularly on the line, where enormous value is placed on God-given masculinity and transgender people would not be welcomed with open arms. However, there are ways to ease a change this big and controversial into place, just as the military did with integrating women. Just as it did with gays and lesbians, and people of color, and virtually every other facet of humanity that constitutes modern civil society. We can find a compromise.

Which is to say, there has to be — no, there is — a better way to address this issue than waking up one morning and flipping on a giant neon sign that says You’re No Longer Welcome Here. Go Home. This is a complex matter that warrants a thoughtful approach, which is what Secretary of Defense Jim Mattis seemed to be promising when he asked for a six-month extension for the military to further assess his predecessor’s decision to remove the transgender ban, and also when he personally called Rep. Vicky Hartzler of Missouri to ask her to withdraw an amendment to the 2018 Pentagon budget bill that would have barred the Department of Defense from funding service members’ gender reassignment surgeries.

While we cannot dismiss or downplay the concerns of those opposed to transgender people serving in the military, it’s important to keep in mind that the U.S. military serves a bigger purpose than toppling dictators and killing extremists in foreign lands. It stands up for the American way of life.