Dunford: No Changes To DoD Transgender Policy Yet Despite Trump Tweets

Chairman of the Joint Chiefs of Staff Gen. Joseph Dunford on July 27 threw the brakes on President Donald Trump’s... 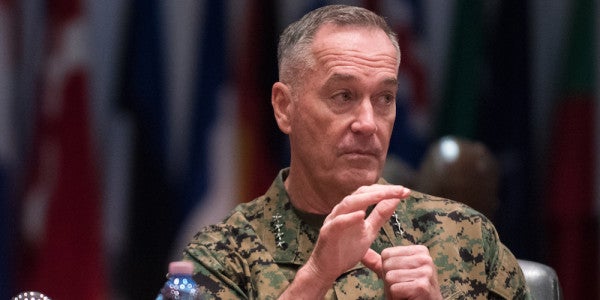 Chairman of the Joint Chiefs of Staff Gen. Joseph Dunford on July 27 threw the brakes on President Donald Trump’s surprise announcement that the Department of Defense would ban transgender service members from the armed forces, citing the need for a clear directive from the White House beyond the president’s penchant for rule by tweet.

“There will be no modifications to the current policy until the President's direction has been received by the Secretary of Defense and the Secretary has issued implementation guidance,” Dunford said a written memo distributed to branch service chiefs and senior military leaders on July 27. “In the meantime, we will continue to treat all of our personnel with respect.”

On July 26, Trump had tweeted that the Pentagon “will not accept or allow transgender individuals to serve in any capacity” in the armed forces, arguing that the U.S. military “must be focused on decisive and overwhelming victory and cannot be burdened with the tremendous medical costs and disruption that transgender in the military would entail.”

Trump’s proclamation reportedly blindsided not just lawmakers on both sides of the political aisle, but DoD personnel, as well. While the Pentagon has focused on evaluating the impact of transgender service members on the health of the armed forces since Obama Secretary of Defense Ash Carter altered the policy in 2016, current data indicates that Trump’s arguments justifying the ban are empirically flawed.

“The Department of Defense is awaiting formal guidance from the White House as a follow-up to the commander-in-chief's announcement on military service by transgender personnel,” Pentagon spokesman Dana White said in a statement July 27. “We will provide detailed guidance to the department in the near future for how this policy change will be implemented. The department will continue to focus on our mission of defending our nation and on-going operations against our foes, while ensuring all service members are treated with respect.”

Apart from telegraphing his personal opinion on the matter of transgender service members, Dunford’s message also serves as a gentle rebuke of a commander-in-chief whose surprise announcements frequently leave Pentagon officials scrambling to interpret tweets as policy. Secretary of Defense Mattis himself was reportedly “appalled” by Trump’s announcement, which came during Mattis’s first vacation after spending months carefully evaluating the Obama-era policy.

But Dunford’s statement also sets an important precedent: The American president does not rule by decree, despite the authority vested in President Trump by Article II of the U.S. Constitution. Trump’s tweets, though often interpreted as signals of a broader policy for a content-hungry news media, are not official executive actions in themselves. Besides, the authority for actually maintaining and regulating the composition of the U.S. forces rests squarely on Congress’s shoulders.

This subtext of Dunford’s memo could come as a major relief for some Pentagon officials reportedly on edge over their commander-in-chief’s quixotic approach to military force. According to a BuzzFeed News report, the first tweet in Trump’s salvo “raised fears that the president was getting ready to announce strikes on North Korea” or another major military operation that might leave commanders downrange flat footed.

“Many said they were left in suspense for nine minutes, the time between the first and second tweet,” Buzzfeed News reports. “Only after the second tweet did military officials receive the news the president was announcing a personnel change on Twitter.”