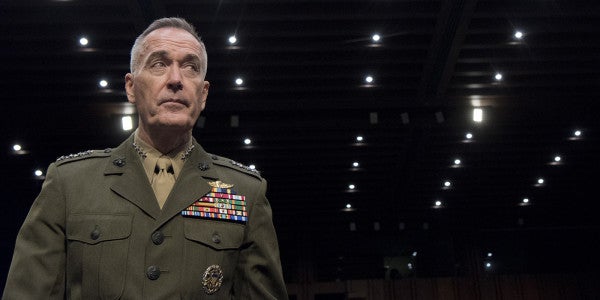 Marine Corps Gen. Joe Dunford went to Capitol Hill on Sep. 26 seeking to remain chairman of the Joint Chiefs of Staff for two more years, and he gave the lawmakers who will renew his tenure just what they were looking for: lots of surprising thoughts on lots of subjects.

Dunford, who was re-nominated by President Donald Trump to remain on the joint staff beyond his initial two-year term, dished to members of the Senate Armed Services Committee on Sept 26. on the North Korean threat, the future of transgender troops in the armed forces, the military effort in Puerto Rico in the aftermath of Hurricanes Irma and Maria, and even Air Force One’s mid-air refueling capabilities — and some of the general’s answers are sure to be controversial.

Here’s a quick primer on the issues senators asked about, and the answers Dunford gave:

Dunford: North Korea is not ready for war yet

There was reason for optimism and apprehension in Dunford’s comments on the Hermit Kingdom and dictator Kim Jong-Un’s threats to the United States: The U.S., he said, should assume North Korea has the ability to strike the American mainland with a nuclear ICBM.

Intel analysts are pretty sure the DPRK doesn’t have that capability just yet, but it will soon enough, he said. “Whether it’s three months or six months or 18 months, it is soon,” Dunford told the senators. “We ought to conduct ourselves as though it is just a matter of time, a matter of very short time, before North Korea has that capability.”

On the other hand, for all the mighty rhetoric about war that’s flown back and forth between Kim and Trump (and vaping congressmen), there’s not much evidence North Korea is actually doing anything that suggests preparations for war, Dunford said:

Dunford: Despite recent rhetoric, "we have not seen a change in posture of North Korean forces. We watch very closely."

“While the political space is clearly very charged right now, we haven't seen a change in the posture of North Korean forces, and we watch that very closely,” he said. “What we haven’t seen is military activity that would be reflective of the charged political environment.”

In a surprising break with both service traditions and the White House, Dunford told the panel that he believes transgender troops already in uniform should be allowed to remain in the service.

“I would just probably say that I believe any individual who meets the physical and mental standards, and is worldwide deployable and is currently serving should be afforded the opportunity to continue to serve,” he said.

The chairman’s words don’t carry the weight of policy yet; the DoD is supposed to give the White House a recommendation next February on the fate of already-serving transgender troops. But Dunford made clear to the senators that his advice to Secretary of Defense James Mattis was to retain any servicemember who can hold their own in the ranks.

Dunford: We're doing all we can for Puerto Rico

Lawmakers were anxious to hear how the America’s military might be brought to bear on the worsening humanitarian crisis in Puerto Rico, where more than 3 million Americans are languishing in flooding, wreckage and heat after the devastation that Hurricane Maria wrought on the island.

Dunford said the services are doing their part and are anxious to do more. “We do have the capability,” Dunford said, but the aid “can't come in until we get the ports and airfields open,” according to Military.com reporter Richard Sisk.

The figures on Puerto Rico provided by the military are bleak: The island will probably need a complete overhaul of its power grid, and nearly half of residents still don’t have access to clean water — which is roughly the same as the share of Americans who don’t realize that Puerto Ricans are fellow U.S. citizens.

BREAKING 80% of the electricity transmission system on Puerto Rico and 100% of the distribution system is damaged, says the US military.

It’s not news that the Air Force is currently working with the White House on specs for the next generation of Air Force One 747s, and they’re looking for places to cut costs. But as Dunford told Republican Sen. Tom Cotton of Arkansas, the new Air Force One is likely to lack mid-air refueling capabilities… and that was not the Air Force’s decision:

An inability to hook up with a KC-135 “will certainly be a limiting factor” on Air Force One’s operations, “and we’ll have to plan accordingly,” Dunford said. What the White House wants, the White House gets.

Cotton called the White House’s decision strange. “We may have to revisit that decision here on Capitol Hill,” he said.

Reasonable people disagree on whether the president’s next-gen jetliner, with a range that reaches Asia from Washington, needs to be able to refuel in mid-air, but it’s a capability that’s come in handy before, including a surprise trip to Baghdad by President George W. Bush in 2003.