Mattis To North Korea: Go Ahead, Make My Day

A week after an alarming report on North Korea’s nuclear program sparked a spiral of brinksmanship between Kim Jong Un... 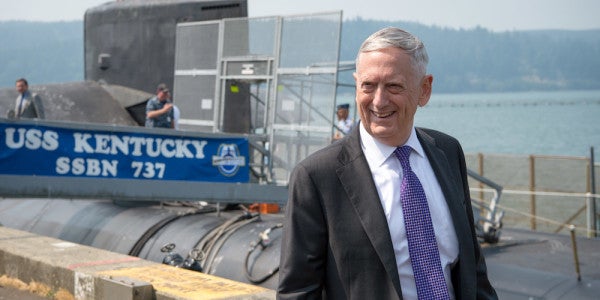 A week after an alarming report on North Korea’s nuclear program sparked a spiral of brinksmanship between Kim Jong Un and President Donald Trump unseen since the Cuban Missile Crisis, Secretary of Defense James Mattis is here to lay down the law.

On Aug. 14, Mattis made a surprise visit to the Pentagon press bullpen, his dry cleaning in tow, to clarify how the Department of Defense is approaching North Korea’s threat to nuke the U.S. territory of Guam. Trump has responded with increasingly harsh warnings that future threats would end with the U.S. engulfing the Hermit Kingdom in “fire and fury,” but Mattis — long seen both domestically and abroad as one of the few adults in the executive branch — offered a somewhat more compelling, if understated, message to Pyongyang: Go ahead, make my day.

“If they do that, then it's game on,” Mattis told reporters of a potential missile launch against Guam. “I think if they fire at the United States, it could escalate into war very quickly, yes. That's called war, if they shoot at us.”

Trump in June declared that the Obama administration’s “strategic patience” with North Korea had failed. But in his remarks yesterday, Mattis indicated that the White House’s options remained open, despite the commander-in-chief’s rhetorical hard line. “

“You can't make all those kinds of decisions in advance,” Mattis said. “There's a host of things going on. [There are] allies that we consult with, as the president made very clear last week. We talked about our allies repeatedly in a statement. That's something we have to think of. But we're getting into hypotheticals and this sort of thing.”

Mattis’ impromptu drop-in on Pentagon reporters is no random visit, but a culmination of collective efforts to reassure a U.S. public suddenly made nervous with nuclear anxiety by Trump’s brinksmanship. On Aug. 9, Secretary of State Rex Tillerson insisted there was “no imminent threat” despite the war of words between Washington and Pyongyang; in a visit to South Korea on Aug. 14, Chairman of the Joint Chiefs of Staff Gen. Joe Dunford reassured his counterparts that the U.S. was pursuing “diplomatic solutions,” according to Bloomberg.

“We are very much confused,” senior South Korean presidential advisor Moon Chung-in told ABC News in an interview that aired on Aug. 13, the day before Dunford’s meeting with government officials in Seoul. “We think the American government has moved from ‘strategic patience’ of the Obama administration into strategic confusion.”

But between Trump’s “strategic confusion” — a post-9/11 update to the “madman theory” that President Richard Nixon deployed during the Vietnam War as a warning to communist rulers, according to former Chief of Staff H.R. Haldeman — and Mattis’ blunt warning of retaliation, North Korea seems to have gotten the message. Hours after Mattis arrived in the Pentagon press room on Aug. 14, the Wall Street Journal reported that Kim had backed off his threat to rain nuclear fire down on Guam, according to North Korea’s state media — a sign that Trump and Mattis had managed to call Kim’s bluff.

Despite this, North Korea is embracing the harsh rhetoric that’s defined the regime’s foreign policy since its first successful nuclear test in 2006. “If the Yankees persist in their extremely dangerous reckless actions on the Korean peninsula and in its vicinity, testing the self-restraint of the DPRK, the latter will make an important decision as it already declared,” Kim reportedly told state media.

The news of North Korea's Guam stand-down may come as a relief to Pentagon officials who worried that, without a “red phone” of the sort that helped Moscow and Washington to avert nuclear misunderstandings, the game of chicken between Trump and Kim seemed like a formula for war. But even as Kim blinks, Mattis watching the Hermit Kingdom with both eyes wide open; if Trump embraced Nixon’s madman theory, Mattis seems to have taken Teddy Roosevelt’s advice to speak softly and carry a big stick.

“You know, I need a certain amount of ambiguity on this,” Mattis told Pentagon reporters on Aug. 14, “because I'm not going to tell them what I'm going to do in each case.”