As North Korean leader Kim Jong-Un continues to threaten nuclear war, U.S. allies across the Pacific are taking every precaution.... 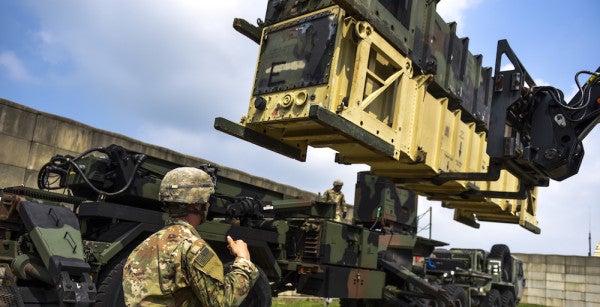 As North Korean leader Kim Jong-Un continues to threaten nuclear war, U.S. allies across the Pacific are taking every precaution. South Korea, the nation most vulnerable to an attack by the DPRK, has begun to prepare for the worst — but they aren’t preparing alone.

The U.S. Army’s 35th Air Defense Artillery Brigade recently completed an eight-month exercise to modernize a Patriot missile defense system and train up its operators, who are tasked with protecting Osan Air base from a North Korean attack.

“The purpose of the battalion netted exercise was twofold,” Chief Warrant Officer 3 Tara Gibbs, the 35th’s Patriot modernization project officer, said in an Army release. ”First, it was to validate the systems to ensure everything worked and met the industry standard for performance. The second was to qualify the soldiers and crews on the new equipment.”

The project is the largest Patriot modernization effort ever carried out outside a depot facility, according to the release. The 35th Brigade worked with contractors from Raytheon and the Lower Tier Project Office to complete the project, which replaced outdated technology on the system.

The Patriot missile defense system, produced by Raytheon, has been around for decades and was made famous by its deployment against Saddam Hussein’s Scud missiles in the first Gulf War. The system detects, identifies, and destroys ballistic missiles, cruise missiles, drones, and threatening aircraft. “Since January of 2015, Patriot has intercepted more than 100 ballistic missiles in combat operations around the world,” according to Raytheon.

In the coming months, the Army says, it will work to continue to fortify its bases on the Korean peninsula from the growing threat of North Korean aggression.

Though Kim has not publicly stated any plans to launch missiles at its enemy to the south, his regime recently made a threat to launch a nuclear missile at Guam in advance of a joint military exercise between South Korea and the United States.

He walked that plan back in a statement Aug. 14, but added that he could change his mind “if the Yankees persist in their extremely dangerous reckless actions.”