Escalating war overtures are serious enough that the U.S. should begin moving the families of American service members off the... 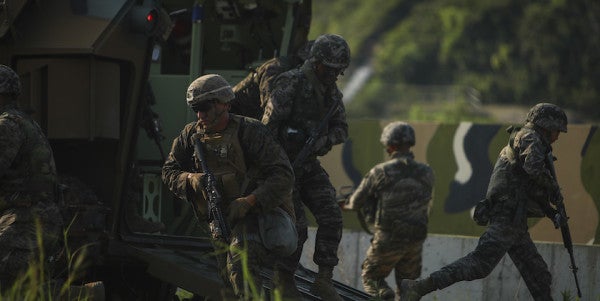 Escalating war overtures are serious enough that the U.S. should begin moving the families of American service members off the Korean Peninsula, Sen. Lindsey Graham said on Dec. 3, a week after North Korea broke two and a half months of relative quiet by conducting its most powerful weapons test yet.

Graham, a member of the Senate Armed Services Committee, is also calling for the Pentagon to stop moving military dependents into South Korea, where roughly 28,500 American troops are stationed. About 12,000 of those troops are participating in a massive five-day joint air exercise with South Korean allies that kicked off on Dec. 4. White House National Security Adviser Lt. Gen. H.R. McMaster said over the weekend that the potential for war “is increasing every day.”

“It’s crazy to send spouses and children to South Korea, given the provocation of North Korea,” the South Carolina Republican said Sunday on CBS News’ Face the Nation, referring to Pyongyang’s Nov. 29 launch of a Hwasong-15 intercontinental ballistic missile that left and re-entered the Earth’s atmosphere before crashing into waters off the coast of Japan.

The missile — which, according to CNN, is “believed to be the biggest and most powerful missile” in North Korea’s arsenal — traveled 2,800 miles and remained in the sky for 53 minutes.

Despite Trump’s stern warning in August that any more provocations from the Hermit Kingdom would be “met with fire and fury like the world has never seen,” the latest missile test sent a clear signal that Little Rocket Man is not backing down. Defense Secretary Jim Mattis said after last week’s missile launch that North Korea may now have the ability to strike “everywhere in the world.”

“There are ways to address this problem short of armed conflict, but it is a race because he’s getting closer and closer, and there’s not much time left,” McMaster told reporters on Dec. 2, calling North Korea “the greatest immediate threat to the United States.”

There appear to be no illusions among all the parties involved, including North Korea, that a war on the peninsula would be anything but catastrophic.

Denial of nuclear ICBMs to North Korea “means preemptive war as a last resort,” Graham told CBS. “The preemption is becoming more likely as their technology matures. I think we’re really running out of time. The Chinese are trying, but ineffectively. If there’s an underground nuclear test, then you need to get ready for a very serious response by the United States.”

The U.S.-South Korea air drills that commenced on Monday involve 230 aircraft, including six F-22s, six F-35As, and 12 F-35B fighter jets. The five-day exercise will include simulated attacks on mock North Korean nuclear and missile targets, according to Yonhap News. In August, Jong Un vowed to respond to such joint military drills with “merciless revenge.”

There are more than 130,000 American citizens currently living in South Korea. Most of them are in Seoul, which is about 35 miles from the border with North Korea, within range of its heavy artillery.