While Trump Rattles His Saber At North Korea, Tillerson Extends An Olive Branch

Amid escalating tensions between North Korea and, well, the rest of world (but especially the United States), Secretary of State... 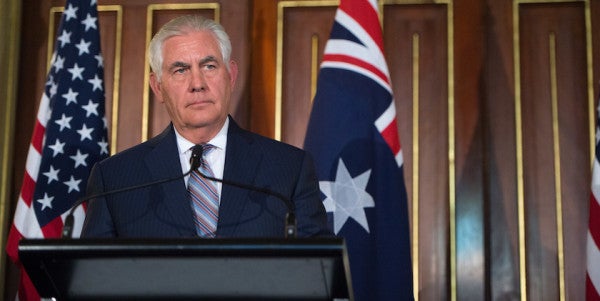 Amid escalating tensions between North Korea and, well, the rest of world (but especially the United States), Secretary of State Rex Tillerson has signaled that the White House is prepared to put the gloves back on to avoid full-scale war on the Korean Peninsula — even if that means temporarily waiving calls for Kim Jong Un to scrap the Hermit Kingdom’s nuclear weapons program.

Speaking on Dec. 12 at the Atlantic Council in Washington D.C., Tillerson said that the U.S. is willing to engage Pyongyang in a formal diplomatic dialogue, despite Trump’s previous claims that the Secretary of State was “wasting his time” negotiating with Kim Jong Un.

“We’re ready to talk anytime North Korea would like to talk, and we’re ready to have the first meeting without precondition,” Tillerson said. He emphasized, however, that the Trump administration remains firmly committed to denuclearizing North Korea: “It’s not realistic to say we’re only going to talk if you come to the table ready to give up your program.

Tillerson’s speech closely followed a report from the United Nations’ stating that North Korea agreed with the UN that the situation on the Korean Peninsula is “the most tense and dangerous” in the world today. UN’s Under-Secretary-General for Political Affairs Jeffrey Feltman, who conducted a series of meetings with Pyongyang officials over a four-day period last week, urged “a diplomatic solution to the situation, achieved through a process of dialogue,” stressing that “time is of the essence.”

Tillerson’s overture sharply contrasts with the numerous threats and insults President Donald Trump has leveled at North Korean leader Kim Jong-un, whom the president has called “Little Rocket Man” and “short and fat.” Trump warned in August that any more provocations from Jong-un’s regime would be “met with fire and fury like the world has never seen.” Unfortunately, that didn’t do the trick. On Sept. 3, Little Rocket Man replied by detonating a hydrogen bomb northeast of Pyongyang — North Korea’s most powerful nuclear test ever.

And the provocations have only continued since. On Nov. 29, North Korea shattered nearly three months of relative quit by successfully launching a Hwasong-15 intercontinental ballistic missile — which it called its “most powerful ICBM” — that left and re-entered the atmosphere before crashing into waters off the coast of Japan. The test drew condemnation from the U.S. and Pyongyang’s only major ally, China. Secretary of Defense James Mattis said after the launch that the Hermit Kingdom may now have the ability to strike “everywhere in the world.” Trump vowed to retaliate with “major sanctions.”

Other efforts to persuade Kim Jong Un to abandon his quest for a nuclear-armed North Korea have also proven ineffective. A key pillar of the Trump Administration’s strategy is pressuring China into imposing sanctions on Pyongyang — specifically, as Tillerson stated on Dec. 12, the president “would like to see” China to stop supplying North Korea with oil. The administration believes that doing so would force Pyongyang to the negotiating table.

But among experts who’ve studied the situation closely the consensus appears to be that asking North Korea to end its nuclear weapons program is a non-starter. “We know that North Korea is not going to go there,” Van Jackson, a former Asia specialist for the Defense Department, told NPR on Dec. 13. “So if you want to actually negotiate something, you can’t have an unrealistic goal.”

As NPR notes, Trump’s habit of expressing his thoughts on U.S.-North Korea relations (and Jong Un’s physical stature) over Twitter might be hindering progress on the diplomatic front. For example, when Trump tweeted in October that Tillerson was “wasting his time trying to negotiate with Little Rocket Man,” some in Pyongyang may have taken that to mean that Tillerson doesn’t actually speak for the White House. But Tillerson remains hopeful: He is, after all, asking for just one conversation.

“We can talk about the weather if you want,” he said on Dec. 12. “We can talk about whether it’s going to be a square table or a round table, if that’s what you’re excited about. But can we at least sit down and see each other face to face? And then we can begin to lay out a map, a road map of what we might be willing to work towards.”