North Korea’s Military Is Getting Millions Of New Volunteers, According To North Korean Propaganda

As talks of an all-out war with the United States rage on, 4.7 million patriotic “students and workers,” including more... 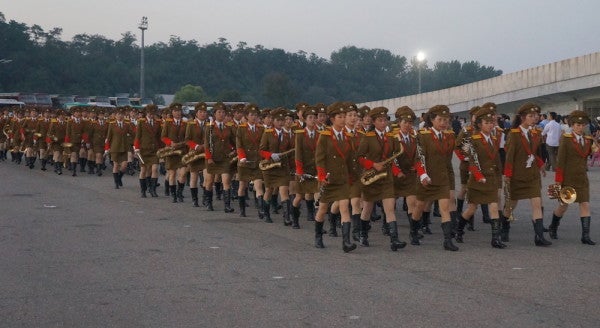 As talks of an all-out war with the United States rage on, 4.7 million patriotic “students and workers,” including more than a million women, have volunteered to join the North Korean military. At least, that’s what the North Korean state-controlled media said Sept. 28.

The country, which only boasts a population of around 25 million, does have one of the largest ground armies, according to a June report from Newsweek. It is also one of a handful of countries with compulsory military service, even for female citizens. Which sort of leads one to wonder how the Hermit Nation would have one-fifth of its undernourished populace suddenly, uh, volunteer for service.

Conditions in the North Korean military are thought to be abysmal, with men being forced to serve 10 years, and women serving 7. Rumors even suggest that they are given nothing to eat but a few potatoes a day.

In 2014, the State Department surmised that North Korean ground force hovers around 1.2 million troops, which would make its the army fourth-largest in the world after China, India, and the United States. But at any given time, the army is also believed to have 6 or 7 million reservists ready to jump into action at a moment’s notice.

If you’re slightly skeptical of Rodong Sinmum’s claims about millions of hardy North Koreans signing up for service, you’re probably pretty smart. The paper releases statements about millions of volunteers enlisting whenever tensions escalate, according to the Washington Post. In fact, earlier this summer, the state-run paper suggested 3.5 million people enlisted when United Nations sanctions on Pyongyang were increased.

As we all know, North Korean leader Kim Jong-Un’s words have historically been stronger than his actions, his military, and his nuclear arsenal.

We certainly hope that’s the case, as retired Air Force Brig. Gen. Rob Givens, a veteran of Korea service, recently told the Los Angeles Times that a war with the country could result in at least 20,000 deaths.

“Too many Americans have the view that it would be like the invasion of Iraq or Afghanistan, or like combat operations in Libya or Syria, but it wouldn’t remotely resemble that,’’ he said. “There is only one way that this war ends: with North Korea’s defeat — but at what cost?”