It's almost 7 a.m. here on the west coast of the United States. As I and most of America slept,... 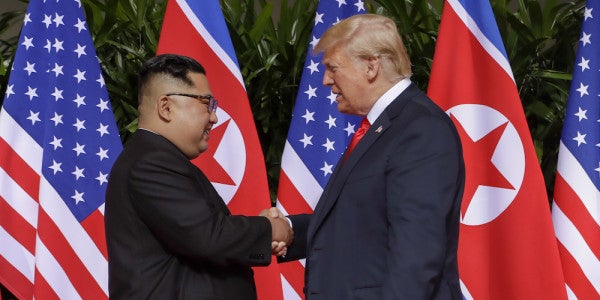 It's almost 7 a.m. here on the west coast of the United States. As I and most of America slept, our president was on television praising a dictator, who currently has more than 200,000 of his own citizens locked up in Nazi-like prison camps, as a “very talented man” who “loves his people.”

Admittedly, I didn't have high hopes ahead of the meeting between President Donald Trump and North Korean Chairman Kim Jong-un, but, if by some miracle, the two leaders could have worked out a deal in Singapore that would have ended (or at least greatly reduced) hostilities on the Korean peninsula and brought Pyongyang's denuclearization, I would have been the first to praise Trump in heroic terms.

Whether tensions between North Korea and the United States are reduced, and whether North Korea decides to actually go through with denuclearization after its latest pledge (of many!) to do so, remains to be seen. But one thing we can be sure of is that North Korea's state-run KCNA television network will be flush with plenty of content for quite a while.

Here's what Trump gave them to work with:

“Really, he’s got a great personality. He’s a funny guy, he’s very smart, he’s a great negotiator. He loves his people, not that I’m surprised by that, but he loves his people.” — Trump talking about Kim to Voice of America

“We are going to get out of the war games that cost so much money. You know where we — cause I think, number one, it’s very provocative, and I want to do it, and I think they’re very happy about it, because it is so provocative.” — Trump talking about joint U.S.-South Korea military exercises, using the word provocative that North Korea often uses to describe them, to Voice of America

“We’re not gonna play the war games. You know, I wanted to stop the war games, I thought they were very provocative. But I also think they’re very expensive. We’re running the country properly, I think they’re very, very expensive. To do it, we have to fly planes in from Guam — that’s six and a half hours away. Big bombers and everything else, I said, ‘Who’s paying for this?’ I mean, who pays, in order to practice.” —Trump to ABC News, on joint U.S.-South Korea exercises

“His country does love him. His people, you see the fervor. They have a great fervor.” — Trump talking about the people of North Korea, who would be imprisoned with their entire families if they weren't fanatical about Kim, to ABC News

“I think he trusts me, and I trust him.” — Trump talking about his relationship with Kim to ABC News

“Well he is very talented. Anybody that takes over a situation like he did at 26 years of age and is able to run it, and run it tough — I don't say it was nice. I don't say anything about it — he ran it, very few people at that age. You can take one out of 10,000 that probably couldn't do it.” — Trump on Kim taking over dictator duties from his father

Looking at what North Korea gained versus the U.S. in this historic meeting, it's hard to see this as anything but a huge win for Pyongyang — especially in their propaganda department — while Washington gets mere promises that are eerily similar to those broken in the past.

Trump and Kim's joint statement says the two countries will commit to “peace and prosperity” and work toward “complete denuclearization” — but it offers little detail: no meaningful steps toward those goals, no process for verification. In essence, it's a document of hopes and dreams rather than trust, but verify.

So we in the United States are left to “wait and see what happens” — as Trump loves to say — while Kim returns home with something tangible he can use for years to come: the recognition and praise of the president of the United States.