Syrian President Bashar al-Assad says he will visit North Korea at a date and time to be determined to meet... 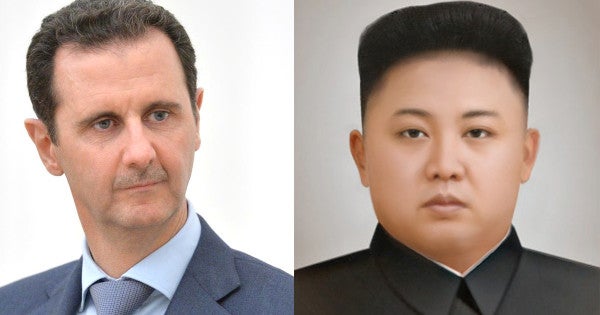 Syrian President Bashar al-Assad says he will visit North Korea at a date and time to be determined to meet with North Korea's Kim Jong Un, in what is sure to be a historic meeting of two of the world's biggest super-villains.

“I am going to visit the [Democratic People's Republic of Korea] and meet [His Excellency] Kim Jong-un,” Assad said, according to state-run Korean Central News Agency. “The world welcomes the remarkable events in the Korean peninsula brought about recently by the outstanding political caliber and wise leadership of [His Excellency] Kim Jong-un. I am sure that he will achieve the final victory and realize the reunification of Korea without fail.”

Assad was, of course, referring to the upcoming meeting between U.S. President Donald Trump and Kim, the logistics of which are currently being ironed out for a June 12 summit in Singapore.

While that meeting is supposed to be focused on denuclearization of the Korean peninsula, and possibly ending the still-technically-ongoing Korean War, the agenda for a high-level meeting of the minds from Syria and North Korea remains unclear.

It's possible that Assad and Kim could simply have brainstorming sessions on how best to violate the human rights of their own citizens, and agree to share intelligence and information in that regard. Assad, for example, has used chemical weapons and dropped barrel bombs on his own people, while Kim likes to lock up entire families into his own gulags.