The Pentagon is still trying to figure out what President Trump meant when he said on Tuesday that the United... 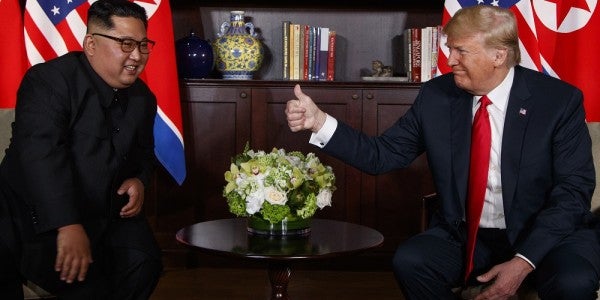 The Pentagon is still trying to figure out what President Trump meant when he said on Tuesday that the United States would cancel its war games with South Korea.

Task & Purpose roamed the halls of the five-sided funhouse all day, trying to get clarity on the president’s comments, but it only became apparent that nothing is clear.

After meeting with North Korean dictator Kim Jong Un in Singapore, Trump told reporters the United States would no longer hold war games on the Korean peninsula, which he decried as “tremendously expensive” and “very provocative.”

“So under the circumstances that we are negotiating a very comprehensive, complete deal, I think it's inappropriate to be having war games,” the president said at a news conference. “Number one: We save money – a lot. And number two: It really is something that I think they very much appreciate it.”

Trump later echoed that sentiment in an interview with ABC News:

EXCLUSIVE: President Trump tells @GStephanopoulos "I wanted to stop the war games, I thought they were very provocative, but I also think they're very expensive," when asked if he discussed pulling U.S. troops out of South Korea with Kim Jong Un. https://t.co/ANdmOzpPd9 pic.twitter.com/k015aM4PH9

Trump did not specify whether the “war games” he referenced include all regularly scheduled training exercises between U.S. and South Korean Forces, including Foal Eagle/Key Resolve and Ulchi Freedom Guardian.

“Six and a half hours – that's a long time for these big massive planes to be flying to South Korea to practice and then drop bombs all over the place, and then go back to Guam. I know a lot about airplanes; it's very expensive. And I didn’t like it.”

A spokeswoman for U.S. Forces Korea told Military Times that the command had not been told to cancel this year’s Ulchi Freedom Guardian, which is scheduled for September.

“In coordination with our ROK [Republic of Korea] partners, we will continue with our current military posture until we receive updated guidance from the Department of Defense and/or Indo-Pacific Command,” Lt. Col. Jennifer Lovett told the newspaper.

The Wall Street Journal reported in May that the U.S. military agreed not to involve B-52s in the Max Thunder exercise due to concerns raised by the South Korean government. North Korea had specifically objected to the bombers being part of the exercise.

“We fly in bombers from Guam,” Trump said on Tuesday. “I said: ‘Where do the bombers come from?’ ‘Guam. Nearby.’ I said: ‘Oh, great, nearby. Where's nearby?’ ‘Six and a half hours.’ Six and a half hours – that's a long time for these big massive planes to be flying to South Korea to practice and then drop bombs all over the place, and then go back to Guam. I know a lot about airplanes; it's very expensive. And I didn’t like it.”

Officials at the Pentagon, State Department and White House did not respond to T&P;’s questions about which exercises the president was referring to. When the Defense Department issued a statement on Tuesday afternoon, it did not mention the war games.

“The Department of Defense welcomes the positive news coming out of the summit and fully supports the ongoing, diplomatically-led efforts with the Democratic People's Republic of Korea,” said chief Pentagon spokesperson Dana White. “Our alliances remain ironclad, and ensure peace and stability in the region.”

A White House official told T&P; that Pence was referring to regular readiness training, not semi-annual war games, which would end if North Korea meets its obligations under an agreement.

Until the president explains what he meant, it seems, trying to get clarity on his statements will be as pointless as pearl-diving in the Potomac.