Mattis: US Could Restart Large-Scale Wargames In South Korea 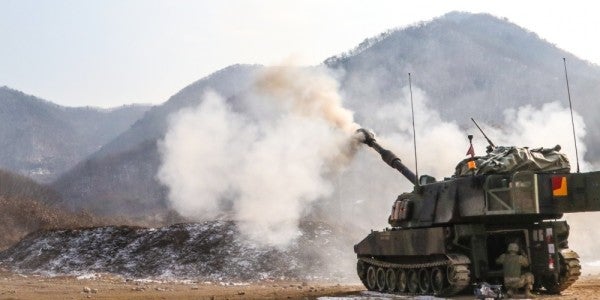 During a rare on-camera Pentagon news briefing alongside Chairman of the Joint Chiefs of Staff Gen. Joseph Dunford, Mattis said the U.S. military does not expect to suspend any further military exercises on the Korean peninsula. But the U.S. government has not yet decided whether to hold Ulchi Freedom Guardian in 2019. The regularly scheduled wargames were cancelled this year as part of denuclearization negotiations with North Korea.

“We suspended several exercises at the direction of the president,” Mattis said. “A good faith effort was made. We have done no planning for suspending others. Obviously, we know what exercises are out there, so we could do that if directed to. But right now, there are no plans to go further.”

But Mattis declined to say when the next large-scale military exercises in South Korea might be held. Instead, he noted that U.S. troops have continued to take part in smaller training events with the South Korean military.

“The reason you’ve not heard much about them is North Korea could not in any way misinterpret those as somehow breaking faith with the negotiation,” he said. “So the exercises continue. What it means in practical terms is that we’re making no changes to the exercise program at this time.”

Mattis’ announcement seemed to indicate the U.S. government is taking a harder line on North Korea, but he clarified that U.S. officials have not yet decided whether to proceed with next year’s Ulchi Freedom Guardian or other training events, such as Foal Eagle. “We’ll do that in consultation with State,” he added.

On June 12, President Donald Trump seemed to catch the Pentagon off guard when he announced that the United States would suspend Ulchi Freedom Guardian, which he called “tremendously expensive” and “very provocative.”

“Under the circumstances that we are negotiating a very comprehensive, complete deal, I think it’s inappropriate to be having war games,” Trump said after meeting with North Korean dictator Kim Kong Un in Singapore.

Then, on Aug. 24, the president tweeted that he had cancelled Secretary of State Mike Pompeo’s planned trip to North Korea because, “I feel we are not making sufficient progress with respect to the denuclearization of the Korean Peninsula.”

I have asked Secretary of State Mike Pompeo not to go to North Korea, at this time, because I feel we are not making sufficient progress with respect to the denuclearization of the Korean Peninsula…

When reporters pressed Mattis on Tuesday about what has changed since Trump ordered the Pentagon to suspend Ulchi Freedom Guardian in June, things got confusing. Here is a partial transcript of his exchanges with journalists, edited for clarity and length (emphasis ours):

Q: Mr. Secretary, when you say that the initial decision was a good faith gesture and now you’re not planning to suspend anymore at the moment, are you suggesting that North Korea is acting in bad faith?

Q: After the Singapore summit 11 weeks ago, the U.S. administration talked about these exercises as “wargames.” The president characterized them as “provocative.” If the U.S. does turn these large exercises back on, have they now become provocative wargames? Is it an act of …

A: We’re not turning them back on. They’ve never been turned off. We turned off several to make a good faith effort. We are going to see how the negotiations go and then we’ll calculate the future, how we go forward. I mean, this is about as straightforward as I can put it.

Q: Forgive me, so if the U.S. goes forward with the exercises again – as they have annually – next year, are they now a “provocative” act …

A: I don’t have a crystal ball right now. Let’s see how the negotiations go. Even answering a question in that manner could influence the negotiations. Let’s let the diplomats go forward. We all know the gravity of the issues they’re dealing with. We’ll deal with supporting the diplomats, as I’ve said repeatedly.

Task & Purpose was unable to get further clarity on Mattis’ comments by deadline.