The U.S. military has called off yet another exercise in South Korea as part of President Trump’s efforts to reach... 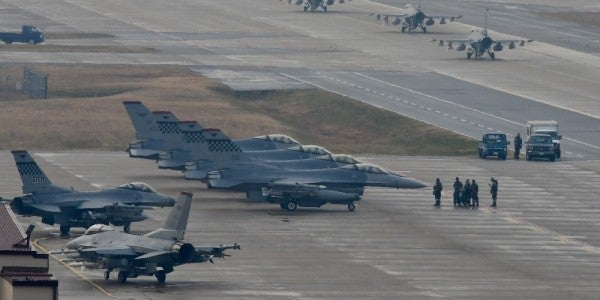 The U.S. military has called off yet another exercise in South Korea as part of President Trump’s efforts to reach an agreement with North Korean dictator Kim Jong Un about nuclear weapons.

Vigilant Ace, an annual aviation exercise, will not be happening in December. Its purpose is to allow the Air Force as well as Navy and Marine Corps aviation units to train with South Korea’s air force. Last year’s exercise involved 230 aircraft.

“Both ministers are committed to modifying training exercises to ensure the readiness of our forces. They pledged to maintain close coordination and evaluate future exercises.”

Friday’s announcement is the latest development in the off-again, on-again war games on the Korean peninsula. In June, President Trump ordered the Pentagon to suspend this year’s Ulchi Freedom Guardian exercise, which he called, “tremendously expensive” and “very provocative.”

Mattis told reporters on Aug. 28 that there were no plans to cancel further exercise in South Korea; however, the U.S. government had not yet decided whether to hold the Foal Eagle and Ulchi Freedom Guardian wargames in 2019.

But the next day, Trump tweeted a White House statement that contradicted Mattis: “There is no reason at this time to be spending large amounts of money on joint U.S.-South Korea war games. Besides, the President can instantly start the joint exercises again with South Korea, and Japan, if he so chooses. If he does, they will be far bigger than ever before.”

Trump’s relationship with Kim was warmed considerably this year. The two leaders met in Singapore in June and Trump has expressed his appreciation for the correspondence he has received from Kim.

“He wrote me beautiful letters,” Trump said at Sept. 29 rally in West Virginia. “They were great letters. And then we fell in love.”

SEE ALSO: Next Year’s War Games In South Korea May Or May Not Happen, Maybe