The recent diplomatic talks between North and South Korea, in advance of an historic Singapore summit between President Trump and... 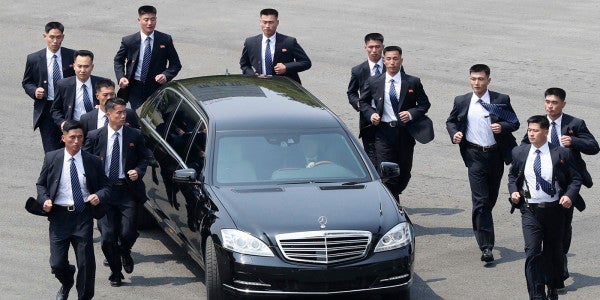 The recent diplomatic talks between North and South Korea, in advance of an historic Singapore summit between President Trump and Kim Jong Un, gave us a unique opportunity to observe Kim’s security detail. According to this article on Yahoo, the North Korean leader “was escorted by a phalanx of bodyguards carefully chosen for their fitness, marksmanship, martial arts skills and even looks.”

“Even looks.” Yes, when it comes to protecting an at-risk public figure, especially during scheduled public appearances, looks do matter — including how protectors look at others. By “looks,” I mean the opposite of attractiveness; I mean deterrence.

In North Korea, where the U.N. estimates 41% of the population — 10.5 million people — are undernourished, muscular bodyguards in tailored suits tend to stand out. One former elite bodyguard and DPRK defector described national tryouts to join 120 handpicked protectors assigned to the previous “Supreme Leader,” Kim Jong Il.

Once he’d made the team, feasting on scarcities like oranges, pineapples, and even bear and tortoise meat, soon became the norm. When a population teetering on starvation sees these black-clad supermen dashing through the vacant streets of Pyongyang, even the most desperate dissident piping with vengeance, it seems, would be intimidated.

‘No suspicions. Another security breakdown’

The Secret Service appeared to be a strong deterrent, so like many would-be assassins, Bremer switched to an easier target: He chose Wallace, who was running for the Democratic presidential nomination — and whose security was visibly more relaxed. “These SS men are a different crew than was in Dearborn,” Bremer wrote of them. “No suspicions. Another security breakdown.”

Now undeterred, on May 15, 1972, Bremer shot George Wallace at close range with a .38 caliber revolver, paralyzing him for life.

“How you look — literally how you look at people — can enhance deterrence,” personal security specialist Gavin de Becker writes in his bookJust 2 Seconds: Using Time and Space to Defeat Assassins and other Adversaries. “There are many cases,” he adds, “where attacks were deterred by the conspicuous currency of protectors — by the appearances that matter.”

So what are the “appearances that matter”? After 19 years in public and private security, here are four observable qualities I consider most important for security deterrence:

After studying more than 1,500 actual and planned attacks for Just 2 Seconds, de Becker concluded, “Protectors who project an aura of ‘you won’t succeed here’ can cause a would-be attacker to switch targets.”

‘One of the world’s tightest security blankets’

Imagery of Kim Jong Un’s dialed-in protectors, running adjacent to his limo near the DMZ, captures the four qualities of deterrence. With President Trump and Kim finally meeting in Singapore on June 12, we’ll get an even closer look at this A-team from the north — what one former member of the Supreme Guard called “one of the world's tightest security blankets.” After watching the DMZ footage, that claim certainly seems valid.

While the appearance (and deterrence value) of Nixon and Wallace’s protectors differed in quality to their pursuer, let’s hope Trump and Kim’s do not.

A would-be attacker likely does not know if the protectors he observes are experts in martial arts or former Army Rangers. All he really knows is what he sees, hears, and feels when watching those protectors. He has one chance for an attack. He fears failure the most.

Will he take his one chance against protectors who appear physically fit, present, suspicious, and confident? Or will he prefer attacking a public figure protected by the kind of security detail we unfortunately see most often: overweight protectors distracted more by their phones than by suspicious crowd-goers in their midst?

On this point at least, the White House and the North Korean leadership agree: A good security detail doesn’t just prepare for any contingency; it looks prepared. And that may be the best protective measure of all.