The Republic of Korea defense minister does not understand North Korea’s Kim regime as to its nature and modus operandi,... 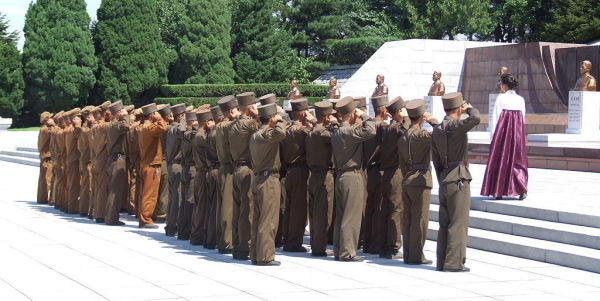 The Republic of Korea defense minister does not understand North Korea’s Kim regime as to its nature and modus operandi, and like most ROK military officers, has little education on how the regime rules. The Korean Workers' Party is the foundation of the regime and it is embedded in every organization and institute down to the village, factory, farm level, including the military and the security agencies. Killing Kim Jong Un and his cohorts will not eliminate the regime because the party will still be in charge. They may eliminate the Kim family and some of the elite, but the senior ultra-elite made up of anti-Japanese partisan families will live on to take over because they in the position to do so. Until there is rebellion at every level of North Korea against the regime — and only the military can do this, if they eliminate their political officer watch dogs — the regime will live on. It takes time for the regime to fall apart.

ROK military officers study the North Korean order of battle and readiness and they get that, but that is not the “regime.” The regime is run by the Korean Workers' Party led by the supreme leader. The party's ability to rule is based in its dominance of policy and ubiquitous presence in every institution including the military. The DPRK government is the lapdog to the party. Government officials may recommend courses of action that are not contrary to supreme leader guidance, but the party and the supreme leader make the decisions. As for the North Korean military, every military unit down to battalion and front line (DMZ) companies has a political officer that reports to the party. The commander cannot make his own decisions without running them by the political officer. The commander cannot make any personnel decisions because this is only done by the political officer. The unit commander cannot even forward his own unit training plan to the next higher headquarters without the political officer's sign-off. Decision-making is in the hands of the party overall and controlled by the political officers within the military. That is why the director of the general political bureau is regarded sometimes as the regime's number two. (In reality there is no number two.)

Also, every military unit battalion and above has an embedded party committee. Supreme leader and party guidance to military units is handed down through this channel. Of course the commander and key officers are on the committee as well; but the political officer serves as the committee's secretary and is responsible for relaying committee actions to the party's control tower — the party’s organization and guidance department — where all actions and decisions within the regime are vetted. On top of that, every unit battalion and above has a military security command officer whose primary mission is anti-coup; in other words, watching the moves of the commander. Compared to the United States or even ROK military, the Korean People’s Army commander is really nothing more than a glorified G/S3. Final decisions and guidance are the purview of the political side of the regime, not the KPA. This is the part that ROK officers do not get.

So why is this important? Targeting.

We can target and destroy weapons systems and units and, perhaps most importantly, their ability to communicate (keep the party from giving further guidance to commanders); but that will not destroy the Kim regime unless we are talking about general warfare that requires the ROK-U.S. alliance to move into North Korea. So what is the most important target beyond the supreme leader and North Korean nukes/ICBMs? Target the party's organization and guidance department before it disperses underground. Otherwise the department replaces Kim with another member of the family if for no other reason than to have a figure head while they patch things up.

Robert M. Collins served 31 years in Korea with the U.S. Army, first as a soldier and then as a civilian. His final assignment was as Chief of Strategy, ROK-US Combined Forces Command.