With tensions between the U.S. government and North Korea at a historic high, the Department of Defense spent 2017 deterring... 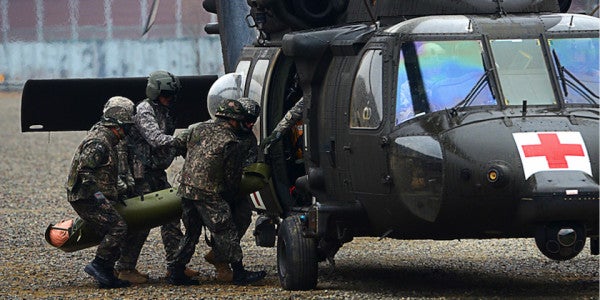 With tensions between the U.S. government and North Korea at a historic high, the Department of Defense spent 2017 deterring an armed confrontation with Kim Jong Un’s regime on the Korean peninsula. The Pentagon deployed three carrier strike groups to the Western Pacific for the first time in a decade; stood up THAAD missile defense batteries in South Korea; and deployed squadrons of F-22 and F-35 fighter jets to patrol the skies near Pyongyang. All the stakeholders know that, even with overwhelming U.S. might and decades of wargaming, an invasion involving the 28,500 U.S. troops currently stationed in South Korea could bring massive casualties for military personnel and civilians, including an estimated 20,000 South Korean deaths a day from North Korean artillery.

But according to a series of war games conducted last year at the Air War College on Maxwell Air Force Base in Alabama, the DoD also faces a limited ability to evacuate wounded service members from a battlefield in Korea — an obstacle that could send the U.S. military death toll soaring in an open conflict.

The upshot: United States forces in a conventional ground war with North Korea could suffer an outsize wound-to-kill ratio due to those airlift difficulties, political science professor and war scholar Tanisha M. Fazal argues in today’s Washington Post. While the United States has endured nearly 7,000 combat casualties in the course of the military campaigns in Iraq and Afghanistan, those numbers have remained relatively low and stable over time due to the DoD’s overwhelming air superiority in the region (an advantage best captured by the massive rise in bombing sorties against militants in the first year of the Trump administration). Under those conditions, evacuation of casualties by air — the fastest method, and hence the key to making injuries more survivable — is a no-brainer.

Unlike al Qaeda or ISIS jihadists, however, North Korea is ready for an air war: A November 2017 assessment by the Congressional Research Service of the country’s military capabilities conclude that while Pyongyang’s air defenses are relatively outmoded, the North Korean Air Force possesses “a dense, overlapping air defense system of SA-2, SA-3, and SA-5” surface-to-air missile sites and other mobile and man-portable anti-air munitions — and that’s not even counting the Kim regime’s fleet of 1,300 Soviet-era aircraft intent on knocking U.S. assets out of the sky.

The distribution of North Korea's air forces, according to a Nov. 7, 2017 Congressional Research Service report on military options for the U.S.

Add it all together, and those air defenses spell trouble for an opposing force’s traditional medevac efforts. “Modern combat medicine has made great advances in stemming blood loss, for example, but those procedures are typically temporary measures, carried out to keep a patient alive until airlifted to a higher-level, trauma-care facility,” Fazal writes. “That was possible in Iraq and Afghanistan, where the United States had undisputed control of the skies. But it would not be true on the Korean Peninsula, at least at first.”

Indeed, a 2012 assessment in Military Medicine found that late Iraqi dictator Saddam Hussein’s air defense command unit was effective enough during the initial months of the 2003 invasion that the U.S. military scrambled to develop forward-deployed medical and surgical teams to stabilize casualties near an injury point.

It’s difficult to assess the DoD’s overall air evacuation capabilities in the event of war with North Korea, given the different system and structure of each branch’s various medical commands. (Air University and the U.S. Army Medical Research and Materiel Command did not immediately respond to requests for comment from Task & Purpose). But as part of the the Air War College simulation, the prospect of an aerial medevac for American troops was reduced to near zero through a conventional strike against a U.S. air base in South Korea; that, Fazal observed, forced a radical shift in how medics treat patients.

“Certain casualties could be saved if air evacuation was possible — but would have little to no hope without evacuation, and thus would receive only palliative care,” Fazal wrote of the simulation. “A base commander would probably require medics to prioritize care for personnel essential to the mission, even if they had less severe injuries than others. Assuming that medicine and medical personnel would not be resupplied, medics would not be able to provide the standard of care to which the U.S. military has become accustomed.”

Even without a direct strike on a U.S. staging area, air evacuations would remain a challenge. “Lift in the Pacific is always a problem and has been for years, simply because it’s just so big,” Lindsey Ford, a Asia Society fellow and former advisor to the Pentagon’s assistant secretary of defense for Asian and Pacific security affairs, told Task & Purpose. “To have the amount of lift you need to cover the tremendous amount of space, there is always a challenge, whether you’re talking about everyday operations or a unique medevac. Just think about that in the context of how many forces we currently have in the region.”

Ford pointed to the 2006 evacuation of U.S. citizens from Lebanon, in which the Pentagon aided the Department of State in extracting 15,000 people over the span of two months in the largest overseas evacuation in U.S. history. While U.S. Central Command was responsible for extracting 90% of the U.S. evacuees to nearby Turkey and Cyprus, a 2007 Government Accountability Office review of the effort found that Israeli strikes on the Beirut airport and subsequent blockades of coastal ports seriously complicated air and sea evacuation efforts. The evacuations were primarily executed by U.S. and British naval flotillas, supplemented by contracted commercial or civilian ships; Marine CH-53 Super Stallion helicopters were used only for the most serious medical cases, primarily because Israeli munitions had “crippled airports, seaports and roads in retaliation for attacks by Hezbollah militants,” the New York Times reported at the time.

There are two options available to the Pentagon to address this problem. The first simply involves improving medevac capabilities by adding more maneuverable aircraft. The Army is addressing this issue with the Future Vertical Lift project, designed to replace the iconic AH-64 Apache attack chopper and UH-60 Black Hawk utility helicopter with an aircraft that combines speed and range with versatility and maneuverability. But since 2016, the Army’s Medical Research and Materiel Command has also been exploring the potential deployment of unmanned vehicles to conduct quick and relatively safe medevacs. Last March, Dragonfly Pictures unveiled the DP-14 Hawk as a potential one-man extraction craft; despite resistance to the deployment of robots downrange, a 2014 USAMRMC report stated that unmanned systems “can potentially conduct extraction and/or retrieval of combat casualties on behalf of the first responder and deliver the wounded Soldier (within a short distance) to a safer location.”

But even the best aircraft can get held up in the skies or be too far from an extraction site, leaving the standard operating procedure for forward surgical teams as the next best option: Stabilize the patient and wait for the cavalry. The Pentagon has a long-established ground-medevac doctrine utilizing chains of medical outposts that connect a forward operating base to a secure medical facility in the rear. The Army’s Combat Casualty Care Research Program (CCCRP) is working overtime on new tech to accelerate diagnosis and treatment downrange, but the branch admits that “prolonged field care” is the primary capability gap of concern across the entire branch, according to the January/February issue of Army AT< Magazine.

“Experts say future battlefields will require medical efforts to be more assertive at the point of injury as opposed to standard forward aid locations,” Army AT< notes, “a shift that also radically changes the concept of the ‘golden hour’ standard of care, which relies on traditional medical transport to get service members treated within the first hour after injury.”

Given the nature of defense planning, that shift in downrange medical treatment won’t come overnight, but it’s long overdue. Declassified documents from 1994 published by the Guardian last month showed that, while the Pentagon remained convinced it would eke out a victory in war with North Korea, a ground invasion would leave some 490,000 South Koreans and 52,000 U.S. troops wounded or killed in the first three months alone. After 15 years of air superiority in the Middle East and Southwest Asia, it appears the best strategy to avoid a breathtaking casualty rate in a conventional war with North Korea is the exact same as with a nuclear conflict with Pyongyang: The only winning move is not to play.