Why North Korea’s Special Operations Forces Should Not Be Underestimated

As tensions escalate between the United States and North Korea, more than the Hermit Kingdom’s aspiring nuclear program, the more... 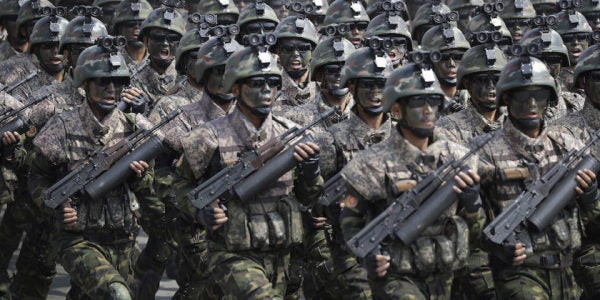 As tensions escalate between the United States and North Korea, more than the Hermit Kingdom’s aspiring nuclear program, the more immediate threat may be the emphasis North Korea places on its special operations forces.

North Korea invests disproportionately in its military, boasting the fourth-largest military in the world for a country that doesn’t rank in the top 50 for population size.

The North Korean militaryis estimated to have a total troop number of 1.2 million, in comparison to the U.S. military’s1.3 million active troops.

Indeed, a 2016 State Department report on global military expenditures estimates that North Korea spends more than 20% of its gross domestic product on its military. As a percentage of its GDP, that’s more than twice as much as any other country, according tothe CIA Factbook.

What’s more, North Korea’s heavy investment in special operations has yielded a force that experts estimatecould be as large as 180,000 soldiers. While the total number of U.S. special operators is shrouded by secretive and classified programs like Joint Special Operations Command, it does not approach 180,000.

Photo taken in October 2015 shows North Korea’s intermediate-range Musudan ballistic missiles displayed during a military parade. It was reported on May 31, 2016, that Pyongyang fired a missile, possibly a Musudan, but the launch appears to have failed.

To put that in context, the current active-duty size of the U.S. Marine Corps, including administrative, support, logistic, and aviation elements, and more than 20 active infantry battalions, equates to183,000 active-duty Marines. So, North Korea’s special operations forces could be nearly as large as theU.S. Marine Corps.

According toa report from the Federation of American Scientists, North Korea is “one of the world leaders in fielding Special Operations Forces.”

The 2015 Pentagon report called the “among the most highly trained, well-equipped, best-fed, and highly motivated forces in the [North Korean People’s Army].”

The 31 North Korean commandos slipped across the demilitarized zone and began the trek to Seoul. But along the way, four South Korean brothers out looking for firewood stumbled on the commando’s camp. Instead of executing the young men, the commandos attempted to persuade them to the virtues of communism, warned them about going to the authorities, and set them free. The brothers immediately reported the encounter to the police, who alerted the South Korean military. Authorities were on high alert by the time the commandos approached the presidential estate at the Blue House in Seoul. Per The New York Times:

Dressed as South Korean soldiers, the 31 Communist commandos dodged their pursuers for three days, talked their way through various checkpoints and got to within a few hundred yards of the Blue House, where they were finally confronted. It was late morning, Jan. 21, 1968.

A ferocious gun battle broke out, and dozens of South Korean troops and civilians were killed. A school bus reportedly was caught in the cross-fire, and three American soldiers also were killed.

As the North Korean raiding party scattered and retreated northward, hunted for more than a week, all but two of the attackers committed suicide or were killed.

Of the two men who ultimately survived the raid, one, a 27-year-old lieutenant, Kim Shin-jo, was pardoned and became a member of the clergy and a reformed member of South Korean society. Kim latersaid in an interview with South Korean press that he believes his parents were executed publicly as punishment for his defection to the South. In contrast, the other survivor escaped back to North Korea, andis believed to be Pak Jae-gyong, who has climbed the ranks in the North Korean military and is now a top general and was a close aide to the late former North Korean dictator Kim Jong Il.

The failed Blue House raid illustrates the way North Korea could use its special operations forces to conduct daring raids and attempted high-profile assassinations. The differing fates of Kin and Pak show the manner in which the Hermit Kingdom will punish perceived defectors or reward loyalists.

While it remains to be seen whether tensions between the United States and North Korea will result in overt military action, it’s clear that special ops should play a more important role in the discussion.