Amid rising tensions between the United States and North Korea, Vice President Mike Pence visited South Korea in a symbolic... 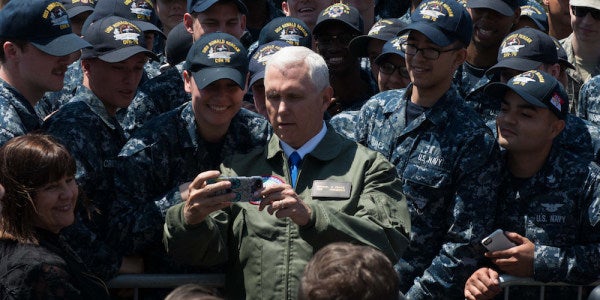 Amid rising tensions between the United States and North Korea, Vice President Mike Pence visited South Korea in a symbolic show of resolve, declaring that the United States would not negotiate with the rogue nation “at this time” and assuring thousands of U.S. sailors and regional military partners during a visit to the USS Ronald Reagan in Yokosuka, Japan, that “the sword stands ready.”

But it’s not swords Pyongyang should be worried about — and it’s not the USS Carl Vinson carrier group, which has been puttering around the Indian Ocean despite assurances from the White House that an “armada” was steaming toward the Korean peninsula to tear Kim Jong Un a new one.

No, according to an account of Pence’s trip to the Korean demilitarized zone by the Washington Post, the only thing the DPRK has to fear is Mike Pence’s smug mug. Take a look (emphasis added):

There has been much discussion in Washington about Pence’s short visit to the demilitarized zone, where he stood outside the Freedom House on the South Korean side of the border and stared into North Korea. Pence wasn’t supposed to walk outside, according to the schedule, but he decided in the moment he wanted to send a message directly to the North Koreans.

I don’t care who you voted for in the 2016 presidential election: This is the most ridiculous thing I’ve ever heard. To be fair to Pence, North Korean soldiers can actually see what’s happening across the DMZ. Just last year, the North Korean military issued a statement whining about U.S. troops taunting border guards with “disgusting” facial expressions and other forms of “hooliganism”:

In the statement North Korea accused American troops of trying to provoke its border guards and warned the U.S. soldiers to stop, or they’d meet a “dog’s death any time and any place.” It goes on to say that South Korea’s military police took part.

But let’s be real: Mike Pence is not an intimidating man. Just look at these photos from his actual visit:

Sorry, Mr. Vice President, but if you want to intimidate North Korean troops, maybe take a page out of the book from former UFC fighter and Green Beret Tim Kennedy: