In its latest attempt to remind the world that it exists and should be taken seriously, North Korea has just... 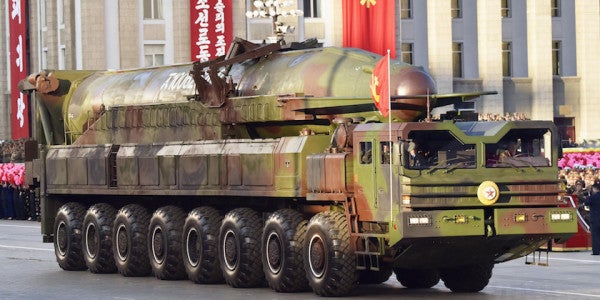 In its latest attempt to remind the world that it exists and should be taken seriously, North Korea has just launched an intermediate-range Musudan missile. Unfortunately for the Hermit Kingdom — and fortunately for everyone else on Earth — the missile test ended in failure. “The missile blew up five seconds after launch,” a U.S. official told Fox News, echoing a similar assessment made by South Korea’s Defense Ministry.

The attempted launch was carried out on March 22 at an air base on North Korea’s east coast along the Sea of Japan during ongoing U.S.-South Korean military drills, which are conducted in South Korea every year. Always, without fail, these exercises trigger threatening responses from the North Koreans, who view the drills as a rehearsal for an invasion. Earlier this month, North Korea broke international law by firing four ballistic missiles that landed in waters off Japan.

“In the light of such huge military forces involved in the joint military exercises, we have no other choice but to continue with our full acceleration of the nuclear programs and missile programs,” Choe Myong Nam, deputy ambassador at the North Korean mission to the United Nations, told Reuters. “We strengthen our national defense capability as well as pre-emptive strike capabilities with nuclear forces as a centerpiece.”

North Korean dictator Kim Jong Un has vowed to expand his country’s missile capabilities, while repeatedly threatening strikes against South Korea, Japan, United States, and the West in general, according to Newsweek. On March 19, North Korea announced that it conducted a successful ground test of a rocket engine that could be used on an intercontinental ballistic missile, with state media claiming that the test would enable North Korea to achieve world-class satellite-launch capability.

Related: Rex Tillerson Says US Could Resort To Military Strike Against North Korea »

“I can tell you for sure that the intercontinental ballistic rockets of the DPRK [Democratic People’s Republic of Korea] will be launched at any time and at any place as decided by our Supreme Leadership,” Choe told Reuters.

Does that mean we should stock up on canned sardines and start practicing “duck and cover”? No, it does not — or at least not yet. See, even if North Korea has indeed developed and successfully tested a rocket engine for ICBMs, the Hermit Kingdom is still a long way from being able to strike the mainland United States. Experts believe that, with the missile technology North Korea currently possesses, it could strike no further than Alaska. Maps from Graphiq, embedded below, also show that Europe is in the clear. For now.

Still, experts and Western officials are convinced that North Korea is working to develop nuclear-tipped missiles that could strike the continental United States. So far, the country has conducted five nuclear tests in defiance of U.N. resolutions, and aerospace expert John Schilling, who monitors North Korea, speculated to Reuters that the recently tested rocket engine may be intended for a new and improved ICBM that is being clandestinely developed.

“What could be next is they would make a new type of ICBM with this new engine system and launch it, but not the entire stages, but to make only the first stage, fly about 400 km and drop,” Schilling told Reuters. “They are not going to show it all at once.”

According to the Federation of American Scientists, ICBMs have ranges greater than 3,400 miles and “enable a country to break out of a regional context and move toward potential global impact.” (That, of course, is North Korea’s intent here.) An ICBM travels along a suborbital trajectory, which means it leaves the Earth’s atmosphere. The recently tested engine could, in theory, give the North Koreans the ability to execute that specific phase of a launch. But what North Korea has yet to master is the technology that would allow the ICBM to reenter the atmosphere without being destroyed. If they do, we might be in trouble.

During a press conference in Seoul last week, Secretary of State Rex Tillerson said Washington’s policy of “strategic patience” toward North Korea has ended. “If they elevate the threat of their weapons program to a level that we believe requires action, that option is on the table,” he said. On March 18, before news reports of North Korea’s test of the new ICBM rocket system surfaced, President Donald Trump told reporters that Jong Un is “acting very, very badly.”

Despite the saber-rattling, official sources told Reuters that the White House intends to pursue “low-risk” options like sanctions and diplomatic pressure before considering preemptive military strikes on North Korea. In early February, Defense Secretary James Mattis, who has called North Korea's pursuit of ICBMs a “serious threat,” reconfirmed that the U.S. will follow through with plans made under the Obama administration to deploy a Terminal High Altitude Area Defense anti-missile system battery to South Korea later this year.