American troops manning the border between North Korea and South Korea were recently accused of trying to provoke the North’s... 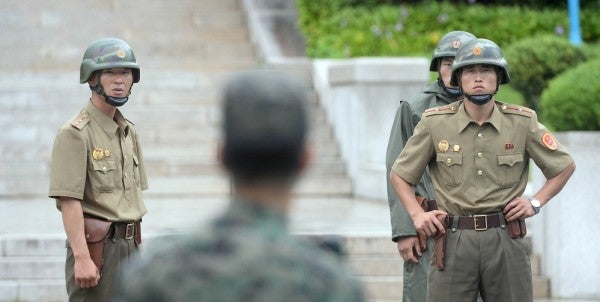 American troops manning the border between North Korea and South Korea were recently accused of trying to provoke the North’s front-line troops.

According to The Associated Press, on April 29 North Korea’s military issued a statement saying that U.S. troops recently engaged in acts of “hooliganism” when they pointed at North Korean soldiers and made strange noises and “disgusting” facial expressions.

In the statement North Korea accused American troops of trying to provoke its border guards and warned the U.S. soldiers to stop, or they’d meet a “dog's death any time and any place.” It goes on to say that South Korea’s military police took part.

The incident purportedly took place at the border village of Panmunjom, which is located within the 2.5-mile wide Demilitarized Zone, where the 1953 armistice was signed. The armistice put an end to the Korean War, but led to an ongoing stalemate between the North and South.

This is not the first time North Korea has accused U.S. troops of attempting to provoke its guards, and its own troops have been accused of doing the same.

Roughly 28,000 American troops are deployed to South Korea, partly as a deterrence against a possible attack by North Korea.