The U.S. is “prepared” to execute a preemptive first strike against North Korea, using conventional weapons, “should officials become convinced... 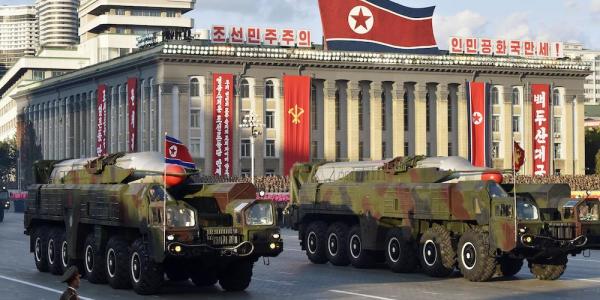 The U.S. is “prepared” to execute a preemptive first strike against North Korea, using conventional weapons, “should officials become convinced that North Korea is about to follow through with a nuclear weapons test,” several anonymous U.S. intelligence officials told NBC News this evening.

According to 38 North, a North Korea research group based at Johns Hopkins University, the satellite photos also reveal “high levels of activity” at tunnels beneath the Punggye-ri nuclear site, where the nation's military has carried out previous tests.

In recent weeks, the Pentagon has deployed WC-135 Constant Phoenix “nuke-sniffer” aircraft to military installations in Japan to monitor for nuclear activity across the region, Newsweek reports.

The suspected test could come as soon as this Saturday, the 105th birthday of Kim Il-Sung, the nation's late founder and grandfather of the current leader, Kim Jong-Un. Previous reports suggested that Kim planned on carrying out his next missile launch to coincide with the culturally significant day.

Given the increasing number of long-range missile tests carried out in recent weeks by Pyongyang, the Pentagon is taking the prospect of a successful nuclear test very seriously, according to NBC News:

The intelligence officials told NBC News that the U.S. has positioned two destroyers capable of shooting Tomahawk cruise missiles in the region, one just 300 miles from the North Korean nuclear test site.

American heavy bombers are also positioned in Guam to attack North Korea should it be necessary, and earlier this week, the Pentagon announced that the USS Carl Vinson aircraft carrier strike group was being diverted to the area.

The U.S. strike could include missiles and bombs, cyber and special operations on the ground.

The mention of special forces on the ground in North Korea is particularly provocative. Last month, South Korean media reported that Navy SEALs — namely “Seal Team 6,” known for executing the raid that killed Osama bin Laden — were preparing for a “decapitation attack” to neutralize North Korean's military and political leadership (The Pentagon denied the report).

The news also comes following the use of the GBU-43 Massive Ordnance Air Blast bomb, one of the largest non-nuclear bombs in the U.S. arsenal, by the Air Force against an ISIS target in Afghanistan — the munition's first use in a conflict.

But on Thursday, North Korean officials warned in a statement of a “merciless retaliatory strike” should the White House take any military actions against the rogue state, NBC News reported.

“By relentlessly bringing in a number of strategic nuclear assets to the Korean peninsula,” the statement said, “the U.S. is gravely threatening the peace and safety and driving the situation to the brink of a nuclear war.”