Marine Gen. Joseph Dunford, the chairman of the Joint Chiefs of Staff, told a gathering of top-level government officials and... 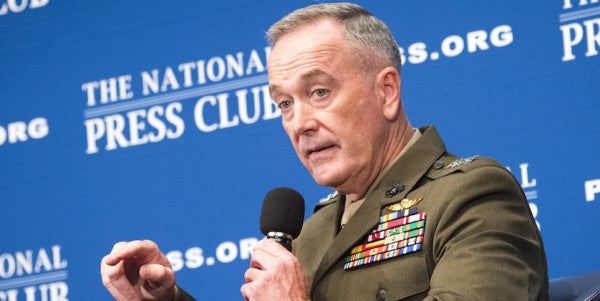 Marine Gen. Joseph Dunford, the chairman of the Joint Chiefs of Staff, told a gathering of top-level government officials and security experts in Colorado over the weekend that the option of a military campaign to halt North Korea’s pursuit of nuclear weapons remains firmly on the table, Politico reports.

Speaking at the eighth annual Aspen Security Forum on July 22, Dunford described North Korea’s nuclear weapons program as an urgent threat to the United States. And while he stressed the importance of leading the effort to end the program with economic and diplomatic pressure, Dunford made it clear that — despite the potential for a war of unprecedented magnitude — the U.S. would resort to military force if necessary.

“Many people have talked about military options with words like ‘unimaginable,’” Dunford said, according to Politico. “I would probably shift that slightly and say it would be horrific, and it would be a loss of life unlike any we have experienced in our lifetimes, and I mean anyone who’s been alive since World War II has never seen the loss of life that could occur if there’s a conflict on the Korean Peninsula.”

Pyongyang has been ramping up its nuclear weapons program in recent months, raising concerns that within the next several years North Korea could possess enough firepower to either hold the world hostage when its demands aren’t met, or, in the worst case scenario, initiate a massive war.

Earlier this month, the country’s 33-year-old leader, Kim Jong-Un, oversaw the country’s first successful test-launch of an intercontinental ballistic missile that could potentially reach Alaska. Pyongyang has made it clear that it has no intention of stopping there. A missile capable of delivering a nuclear warhead to the U.S. West Coast would give the so-called Hermit Kingdom a level of clout deemed unacceptable by the U.S. and its allies.

The recent comments by Dunford, the nation’s senior military officer since 2015 and a former Marine Corps commandant, mark a significant acknowledgment that military force could be used against Kim’s regime, despite the potential for mass casualties and devastation.

Dunford added that the U.S. is already prepared to defend itself and allies like South Korea and Japan in the event that North Korea launched a more limited strike in the region, Politico reports.

According to NBC, there are currently about 140,000 Americans living in South Korea, 28,500 of whom are U.S. military personnel.