North Korea Is Finally Getting The Attention It’s Always Wanted

Having found itself alongside Bashar Al-Assad, Vladimir Putin, and ISIS on President Donald Trump’s ever-growing shit list, North Korea is... 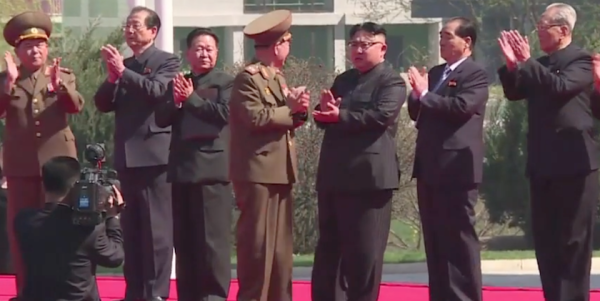 Having found itself alongside Bashar Al-Assad, Vladimir Putin, and ISIS on President Donald Trump’s ever-growing shit list, North Korea is seizing the opportunity to let the world know that it’s ready to throw down.

A Pyongyang official told the Associated Press on April 14 that the Hermit Kingdom is prepared to launch a preemptive strike of its own if the U.S. shows any signs of “reckless” military aggression.

North Korea’s vice foreign minister, Han Song Ryol, told the Associated Press that Pyongyang will keep building up its nuclear arsenal, despite stern warnings from the U.S. Ryol added that Pyongyang is ready to go war if provoked by the Trump administration, which it sees as “more vicious and more aggressive” than that of Barack Obama. Which is something Americans supportive of either administration probably agree on.

On April 13, several anonymous American officials told NBC News that the U.S. is prepared to execute a preemptive strike against North Korea “should officials become convinced that North Korea is about to follow through with a nuclear weapons test.” In addition to bombs, the U.S. strike could also include special operations troops on the ground in North Korea, the officials said.

The reports surfaced while the biggest ever joint military exercises between the U.S. and South Korea are still ongoing. Pyongyang has always viewed the annual drills as a rehearsal for an invasion.

“North Korea is a problem,” Trump said April 13. “The problem will be taken care of.”

That same day, the U.S. Air Force dropped a GBU-43 Massive Ordnance Air Blast bomb, or MOAB — the most powerful conventional bomb in its arsenal, according to The New York Times — on an Islamic State cave complex in Afghanistan, reportedly killing 36 militants. It was the first time the MOAB has ever been used in combat — but it might not be the last.

North Korean dictator Kim Jong Un has repeatedly threatened strikes against South Korea, Japan, United States, and the West in general. In March, Pyongyang announced that it had conducted a successful ground test of a rocket engine that could be used on an intercontinental ballistic missile. Many experts believe North Korea is on track to develop the technology necessary to launch an ICBM equipped with a nuclear warhead within the next few years, the AP reports.

Last year, North Korea conducted two nuclear tests. It now appears determined to conduct another. Ryol, the vice foreign minister, told the AP that North Korea’s nuclear arsenal will grow in both “quality” and “quantity.” Saturday marks the birthday of the country’s founder, Kim Il-sung — a national holiday called Day of the Sun — and experts believe Pyongyang may use the occasion to carry out a missile launch or nuclear test, according to The Guardian.

Meanwhile, North Korea’s staunchest ally, China, is freaking out. During a press conference in Beijing on Friday, the Chinese foreign minister, Wang Yi, pleaded for Washington and Pyongyang to “refrain from provoking and threatening each other, whether in words or actions, and not to let the situation get to an irreversible and unmanageable stage.”

Trump has urged China to step up measures to prevent North Korea from carrying out more nuclear and weapons tests, and threatened U.S. intervention if Beijing-Pyongyang talks falter.

“Once a war rally happens, the result will be nothing but multiple-loss. No one can become a winner,” Wang said. “No matter who it is, if wants to make war or trouble on the Korean Peninsula, it must take the historical responsibility and pay the due price.”