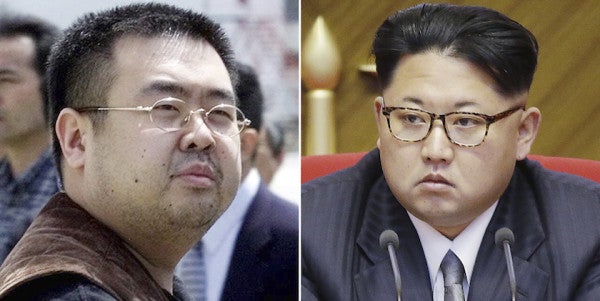 On Feb. 13, Kim Jong Nam, the estranged half-brother of North Korean dictator, Kim Jong Un, was assassinated while waiting to board a flight in Kuala Lumpur. His killers are believed to have been two female agents dispatched by Pyongyang, according to multiple reports. One of the suspected assassins appeared shortly after the attack in airport security footage wearing a white shirt emblazoned with “LOL.”

But this is no laughing matter. Details are still emerging, but some reports suggest Jong Nam was poisoned, either by a needle or a chemical spray. But, according to BBC News, a Malaysian police official told a local news agency that a woman had approached Jong Nam from behind and covered his face with a cloth laced with liquid. Jong Nam “suffered burns as a result of the liquid” and died en route to a nearby hospital. He was either 45 or 46. A 28-year-old woman is now in custody.

This, of course, wouldn’t be the first time assassins have used poison to eliminate high-profile dissidents living abroad. In 1978, Georgi Markov, a Bulgarian writer who had defected from the Soviet Union a decade before, died after he was shot in the back of the leg by a ricin pellet fired from the tip of a weaponized umbrella. More recently, in 2006, Alexander Valterovich Litvinenko, a former Russian spy, died after drinking poisoned tea in a London hotel. Investigators later concluded that two former KGB agents had laced the tea with radioactive polonium-210.

Jong Nam’s death is not a wholly unexpected conclusion to a life on the run. The eldest son of Kim Jong Il, Jong Nam was bypassed in favor of his half-brother for succession when his father died in 2011. Kim then fled the Hermit Kingdom and has spent the past several years traveling across Europe, Russia, and Asia. All the while, he feared assassination. In 2012, he begged his half-brother to spare him.

“Please withdraw the order to punish me and my family,” Jong Nam wrote in a letter to the North Korean dictator. “We have nowhere to hide. The only way to escape is to choose suicide.”

Jong Nam’s fears, of course, were not unfounded. Since assuming total control of North Korea, Jong Un has ruthlessly hunted down anyone he perceives as a threat, executing a number of senior officials, including his own 67-year-old uncle. In an interview with The New York Times, a South Korean intelligence official said that “there has been a standing order” to kill Jong Nam since 2011, and that there was an assassination attempt in 2012.

It is widely speculated that Jong Nam was denied the throne because of a trip he made when he was younger. In 2001, Jong Nam, then about 30 years old, was intercepted with a fake passport at the Japanese border. The reason for his illegal trip? He wanted to visit Disneyland in Tokyo. It’s unclear whether Jong Nam ever fulfilled that particular dream, but in the years after he fled North Korea for good, he was often spotted with fashionably dressed women in airports and spent a lot of time gambling in the Chinese city of Macau.

The South Korean government is assisting Malaysian authorities with the investigation into Jong Nam’s death. Meanwhile, according to a South Korean news agency, the South Korean military intends to use loudspeakers to blast news of the assassination across the border to inform the North Koreans of what their fearless, and incredibly paranoid, leader has done.