One year into the Trump administration, what are the most complex challenges facing the U.S. military? This is the third... 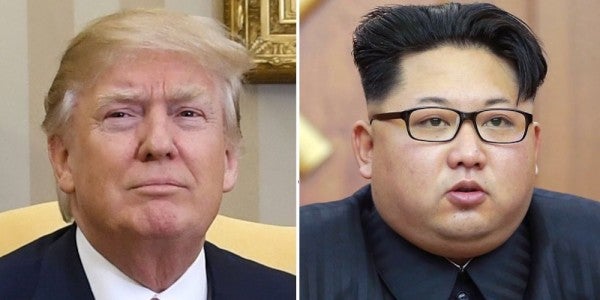 One year into the Trump administration, what are the most complex challenges facing the U.S. military? This is the third installment of THREAT WEEK, our brief series spotlighting some of the Pentagon’s biggest obstacles ahead of President Donald Trump’s first State of the Union address.

In an age where the commander-in-chief can trade barbs with world leaders in a series of tweets, the American public's hyper-fixation on the threat of nuclear war with North Korea is certainly understandable. But it’s also deeply misguided: In the context of global threats brewing elsewhere, President Donald Trump’s feud with Kim Jong Un will only suck scarce resources that could be better martialed to counter emerging threats elsewhere — and even the Defense Department options that fall short of a firefight present a drain that affects the entire U.S. armed forces, according to Lindsay Ford, a Asia Society fellow and former advisor to the Pentagon’s assistant secretary of defense for Asian and Pacific security affairs.

“When we talk about the number of ships and number of forces we’re deploying in various places, it’s a zero-sum environment,” Ford told Task & Purpose. “You’re not going to solve an operational readiness crisis in the next six months, and those readiness challenges will place a strain on our posture. Looking to increase and enhance capabilities in the Pacific will require more forces who are already strained. Just look at the Pacific Fleet: Two ships are completely out of commissions. There are only so many ships to go around, and there are even less now.

To be clear, the DoD can and should consider a nuclear North Korea a threat to the United States, especially considering Pyongyang’s December 2017 test of its powerful Hwasong-15 ICBM, a nuclear-capable missile that could reach the mainland United States. Even a conventional military engagement with North Korea of any kind will not be pretty: While the United States only endured 7,000 combat casualties as part of Operations Enduring Freedom and Inherent Resolve due to coalition air superiority, casualty rates in an open conflict on the Korean peninsula would be significantly worse for both tactical and strategic reasons.

But Ford suggests that even the Pentagon’s tougher posture alone toward North Korea in recent years — the first three-carrier strike group exercises in the Pacific since 2007, the deployment of B-2 bombers to Guam, and so on — will end up not just exacerbating existing readiness issues facing the armed forces, but forestalling DoD efforts to effectively address them.

“[As] the U.S. wanted to explore deploying more forces to the Pacific, there were already a lot of forces deployed in Iraq and Afghanistan and the Obama administration was looking to rebalance our presence in the former,” Ford said. “But that becomes more difficult when you're looking at a destabilizing situation in the Middle East … All of these things add up to forces you need elsewhere.”

Related: This Is One Of US Military Planners’ Greatest Fears In A War With North Korea »

“The options are either to put them out more and further increase the readiness problem, or reduce presence, which will increase operational risks,” she added. “There are real capacity constraints that the U.S. is going to have to deal with in the Pacific, and that’s going to cause problems everywhere else.”

Three F/A-18E Super Hornets, assigned to the Eagles of Strike Fighter Attack Squadron (VFA) 115, fly in formation over the aircraft carriers USS Ronald Reagan (CVN 76), USS Theodore Roosevelt (CVN 71), USS Nimitz (CVN 68) and their strike groups along with ships from the Republic of Korea Navy as they transit the Western Pacific.U.S. Navy/Lt. Aaron B. Hicks

“China has for years looked at what the U.S. was doing in Afghanistan and Iraq and thought there was a window of opportunity because we were overextended,” Ford told Task & Purpose. “The challenge just becomes, for a lot of folks in the Pentagon, ‘Is this a familiar challenge that is going to be further exacerbated?’ At this point, anything’s possible.”

The one thing everyone’s missing: While lawmakers and politicians joust over the efficacy of pursuing diplomatic channels with Pyongyang, there’s been relatively less emphasis on the economic forces that inform military strategy. Even in a political environment allegedly sensitive to the relationship between budgetary jousting and the military, there’s been much discussion surrounding the horror of a military option but relatively less on the cost of a constant aggressive posture.

“Even if you don’t go to war, there are still significant constraints and challenges that the U.S. is going to have to face because of the requirements we have elsewhere and continued budget and readiness challenges,” Ford says. “To me, I guess, there's a lot of very worrisome talk about how awful the war would be, and that’s totally true, but that doesn't mean that executing a less-than-conflict is easy, because not going to war is hard.”