What If The Trump-Kim Summit Wasn’t Really About Nuclear Disarmament?

The most thoughtful thing I’ve read recently about the Trump-Kim talks is by Arthur Waldron, who teaches at the University... 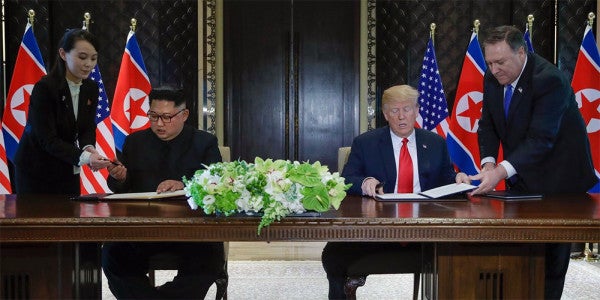 The most thoughtful thing I’ve read recently about the Trump-Kim talks is by Arthur Waldron, who teaches at the University of Pennsylvania.

His core point: “This meeting is not about nuclear disarmament or security guarantees, though they will form much of its substance while receiving disproportionate media and analytical attention. A more accurate appraisal is that the meetings are about repositioning the Korean peninsula politically so that its two halves can gradually draw closer together as the single nationality they are.”

He also notes that the very fact of the summit gives a huge victory to L’il Kim, because it is tantamount to diplomatic recognition. (I wonder if Trump knows how much of a bargaining chip he gave away by meeting without preconditions.) But he still thinks it is a good thing.

I am not sure I agree with Waldron. But constructing an argument against it is difficult — you’d have to stay that sticking with the same old approach has worked despite the fact that North Korea got nuclear weapons under it. And what if Kim thinks that he can denuclearize by quietly selling off his inventory?